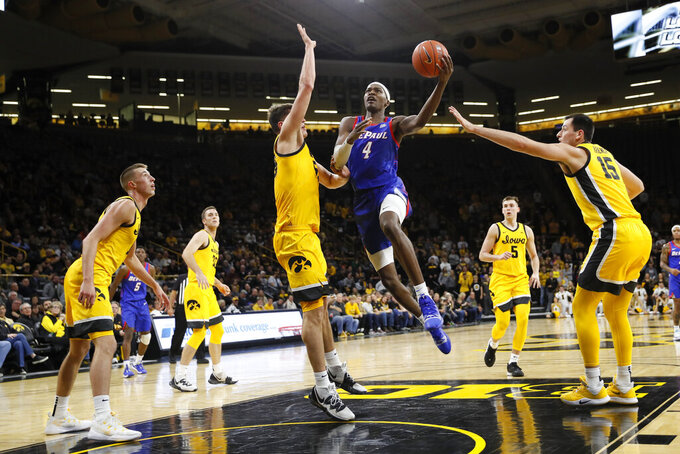 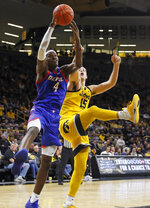 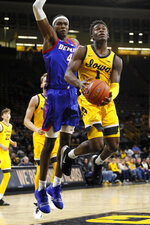 Reed is still getting better by the day, leading the resurgent Blue Demons to their best start in over a decade.

"I couldn't be happier about the start. This was our fourth game in seven days and worrying about fatigue was concerning. But we didn't really show it," DePaul coach Dave Leitao said.

DePaul set off to a blistering pace on both sides of the ball, hitting 8-of-14 3s in the first half and its lead quickly stretched from 16 to 22 points. Markese Jacobs then buried a wide-open 3 to make it 40-16.

The Blue Demons also forced 12 turnovers in the first 20 minutes — constantly flummoxing an Iowa team that always seemed a step behind — in building a 53-30 lead.

"We have to recognize that there's a difference between playing hard and competing," Iowa coach Fran McCaffery said about his post-game address to the team. "We played hard. We didn't compete."

Iowa tried to throw a press defense and some zone at DePaul to open the second half, but it did little to stop the surging Demons.

"He's worked really hard (on his 3s). ...he's always been really good at finishing around the basket and slicing his way," DePaul coach Dave Leitao said of the 6-foot-9 Reed, who was 3 of 4 on 3s. "He's a very natural and elite-level defender."

The Hawkeyes entered play as a 9-point favorite. Instead, they needed a late 11-1 run to make the final score seem more respectable than it was.

"I don't think we handled it well," McCaffery said. "They were on fire. We sort of had this mindset that we were going to get it all back at once. You just can't do that."

DePaul: The Blue Demons looked like an athletic, well-balanced team with the potential to be a problem in the Big East. Coleman-Lands and Reed each went 5 of 8 from the floor in a shockingly decisive first half.

Iowa: The Hawkeyes looked slow, especially on defense, and they lacked length against the more athletic Blue Demons despite starting a pair of 6-foot-11 players. It's still mid-November, so Monday's loss might be later viewed as an aberration. But Iowa hadn't looked that bad at home in a long time. "I'm not concerned that this team has problems that are not fixable," McCaffery said.

Jordan Bohannon had just three points in 16 minutes as he works his way back from hip surgery. ...Freshman Joe Toussiant showed some late fight, scoring all 13 of his points in the second half. ...Forward Ryan Kriener also had 13 points on 5-of-5 shooting. ...Jack Nunge, who started at forward, went scoreless while playing just 10 minutes.

The loss to DePaul capped a miserable Veteran's Day for Iowa fans.

Four-star prep recruit Xavier Foster, who plays at Oskaloosa High (Iowa) some 80 miles southeast of Iowa City, announced on Monday morning at a press conference at his school that he'll play for Iowa State instead of the Hawkeyes next season. The Cyclones and Iowa were Foster's final picks.

The 7-foot Foster was one of the most coveted center prospects in the country. He told the Des Moines Register that while the lure of playing for his childhood team was enticing, the playing style at Iowa State — and the opportunity for playing — won out.

"It was weird. My family is Iowa fans. I'm an Iowa fan, personally. But I just felt like I had a better chance at success at Iowa State. It fits me better," Foster said.