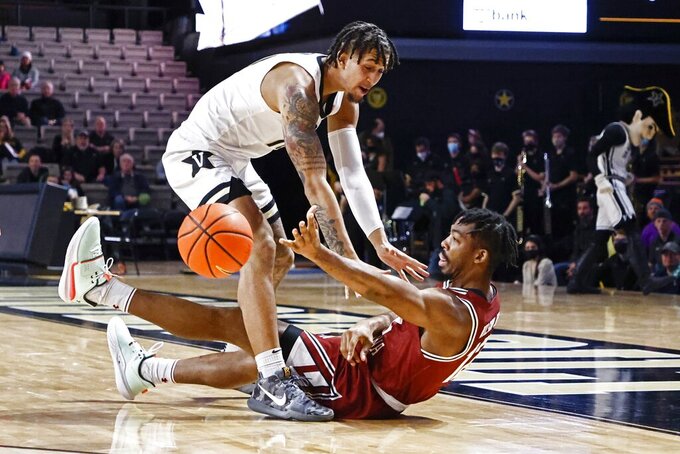 South Carolina forward AJ Wilson (12) passes the ball off as he battle for it with Vanderbilt forward Myles Stute (10) during an NCAA college basketball game Saturday, Jan. 8, 2022, in Nashville, tenn. (AP Photo/Wade Payne) 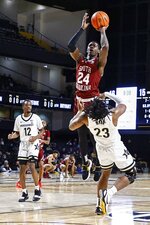 NASHVILLE (AP) — James Reese V scored 13 points and Vanderbilt failed to get up a shot in the final 6.3 seconds as South Carolina pulled out a 72-70 win on Saturday.

Myles Stute, who led the Commodores with 19 points, made 1 of 2 free throws with 12 seconds left. Reese responded with 1 of 2 from the line with 6.3 seconds to go.

Following a timeout, Scotty Pippen Jr. took the ball the length of the court but as he drove to the basket tried to kick out out as time expired.

Pippen scored 15 of his 17 in the second half and Jordan Wright had 15 for the Commodores (9-5, 1-1), who had their four-game winning streak snapped.

South Carolina led 34-32 at the half. Four free throws by Pippen had Vanderbilt within 49-48 but Jermaine Couisnard hit a 3 and scored the last seven points in an 8-0 run to make it 57-48 just past the midpoint. A three-point play by Reese produced the big lead at 64-53 with 6:08 to go.

Pippen's jumper pulled Vanderbilt within 69-67 with 1:34 remaining. Chico Carter Jr. made a dunk for South Carolina with just under a minute to play but Pippen made two more free throws and it was 71-69 at 40 seconds.

The Gamecocks ran the clock down but missed a 3-pointer and Stute was fouled on the rebound.

South Carolina plays at No. 18 Tennessee on Tuesday while Vanderbilt is home against Kentucky.