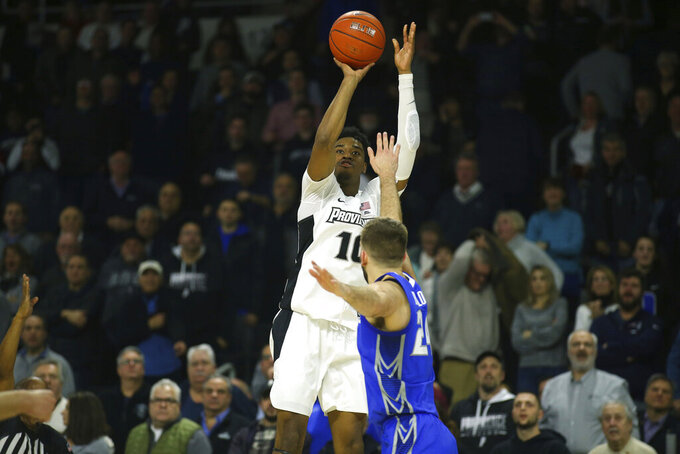 The Friars went to their zone for much of the second half and pulled away from the No. 21 Bluejays 73-56.

“It was how we scouted them. Creighton had some good moments but just couldn’t close the game out,” said Cooley after the Friars defeated a ranked foe for a second straight game after topping No. 16 Butler on the road Saturday.

“They were moving the ball around and kind of popping a little bit so we wanted to see if we could get them out of rhythm a little bit.”

Providence held Creighton to 37% shooting, including 22% from 3-point range. The struggles were even worse during the second half as Creighton managed just 30% from the field and 14% from beyond the arc.

“Any time you can a hold a team down like that ... a McDermott-led team is always going to be high-powered,” Cooley said.

“If they shoot 60% from 3, their record wouldn’t be where it is,” McDermott said. “They went zone and that’s when we really got stuck in the mud.”

Providence’s A.J. Reeves established a season high with 22 points and was 6 of 8 from 3-point range, one shy of the career-high seven 3s he hit in the first game of his freshman year. The Friars defeated a ranked team at the Dunkin’ Donuts Center for the first time since Feb. 2018.

“When A.J. can hit shots like that, it’s a huge boost for us,” Cooley said. “I was really happy for him, but he’s never lacking confidence.”

“I felt good once I saw a couple go in,” Reeves added.

Alpha Diallo, limited to bench duty against the Bulldogs amid a two-game slump, bounced back with 14 points and six rebounds. After scoring 36 points the last time the Friars faced the Bluejays, David Duke helped with 12 points and Nate Watson had 11 points.

Ty-Shone Alexander led Creighton (17-6, 6-4) with 15 points but was just 5 of 15 from the field. Christian Bishop and Damien Jefferson each had 13 points.

Creighton led 36-22 at halftime but Providence owned the second half and outscored the Bluejays 41-20 on 49% shooting, including 12 of 20 from deep. The Friars seized control behind an 18-2 run that allowed the home team to grab a 60-52 lead with 6:14 remaining.

“It was about staying tough and physical down the stretch and making sure we defend every possession like it’s the last one,” Reeves said.

Creighton: The Bluejays came into the game shooting 47 % from the field and 38 % from three. Wednesday marked the first time in Big East play this season that Creighton connected on fewer than 40 % of its shots.

Providence: Wednesday marked the Friars’ fifth straight game against a Big East opponent with a spot in the latest Associated Press Top-25 poll. The last time that happened was 2010. The all-time program record is an eye-popping 10 straight games against nationally ranked teams that was set back in 1991.