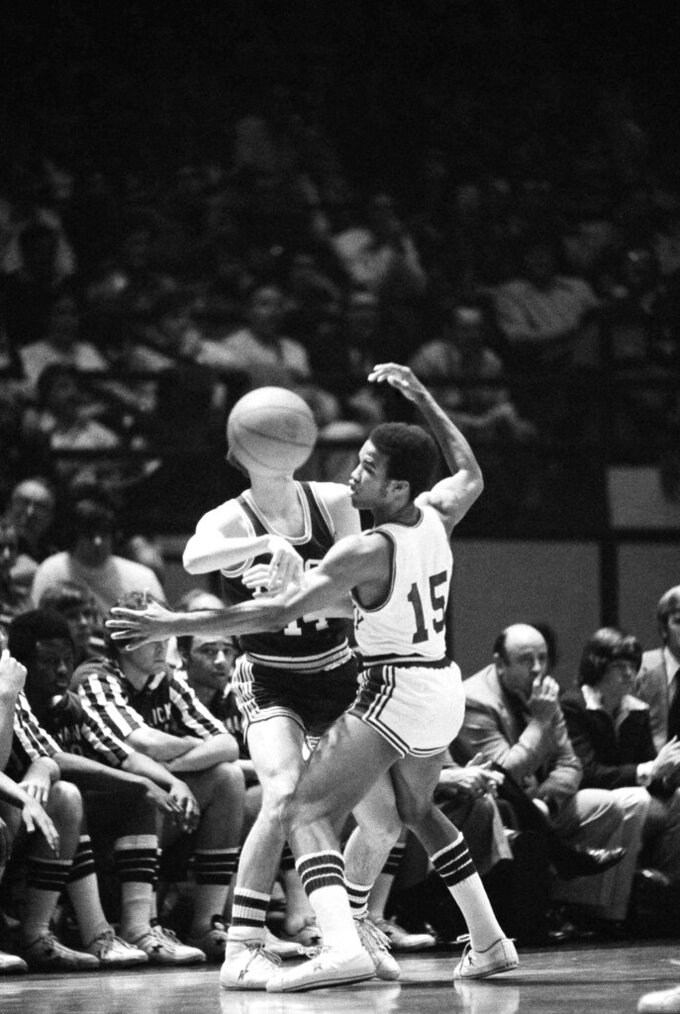 FILE - University of North Carolina at Charlotte's Bob Ball appears to get a ball full in the face as he struggles to gain possession against University of Kentucky's Reggie Warford during first half of their NCAA college basketball NIT playoff game at New York's Madison Square Garden, March 21, 1976. Warford, Kentucky’s second Black men’s basketball player and first Black player at the school to graduate, died Thursday, May 26, 2022, in Pittsburgh. He was 67. (AP Photo/Ray Stubblebine, File)

Calipari, who coached with Warford at Pittsburgh, tweeted: “I’m going to miss my brother, may God bless you Reggie.”

Warford went on to become the Wildcats' first Black four-year player and graduated in 1976 with a degree in arts and sciences.

Several African-American players followed the Drakesboro (Kentucky) High School product, who scored 206 points in 50 games with the Wildcats from 1972-76. One of his teammates was eventual All-American forward Jack “Goose” Givens, who led Kentucky to the 1978 NCAA title.

“His career as a player and student, and his presence as a native Kentuckian, helped set the stage for the continued growth of integration of Kentucky basketball and our entire athletics program,” Barnhart said.

Warford became a starter for Kentucky late in his senior season and averaged 6.5 points per game. His 14 points rallied Kentucky past UNC-Charlotte 71-67 for the NIT championship in New York.

Warford was an assistant coach at Pitt, Iowa State and Long Beach State. He was also the Harlem Globetrotters' head coach in 2003.

Warford won the U.S. Basketball Writers Association’s Most Courageous Award in 1984. He was inducted into the Kentucky High School Athletic Association’s Hall of Fame in 2019.

Warford is survived by his wife and sons Grant and Tyler.