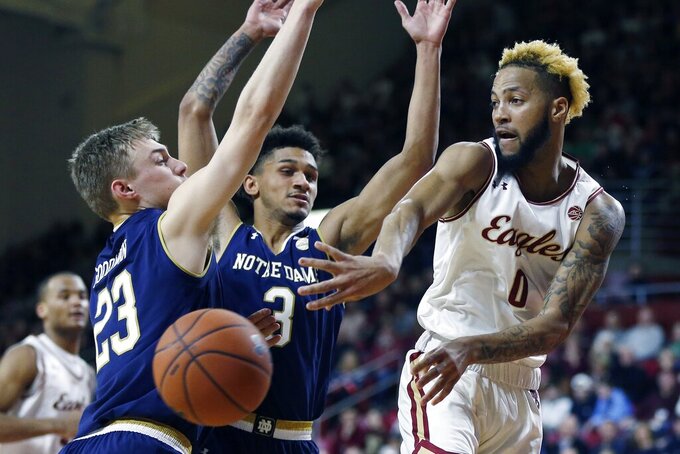 BOSTON (AP) — Seldom-used reserve Nikola Djogo had an interesting way to get his mind ready.

It seemed to work, so now expect it to become his odd pregame routine.

Djogo scored a career-high 21 points in his first start of the season to spark Notre Dame to a 79-73 victory over Boston College Saturday, the Fighting Irish's 13th straight over the Eagles.

"It's actually funny," the 6-foot-7 junior guard explained, standing in a hallway before boarding the team bus. "It started last week at the Duke game. I usually get really riled up before games and get super excited. I've been making it a habit now to go somewhere really, really quiet before the game and basically meditate for a few minutes to kind of settle down and relax and take everything in."

And where did he go?

"I went in the bathroom when everyone was warming up," he said, smiling. "I just kind of sat in one of the stalls and focused."

T.J. Gibbs added 19 points, Prentiss Hubb had 16 and John Mooney 15 for Notre Dame (12-10, 2-7 Atlantic Coast Conference). The Irish halted a five-game losing streak and improved to 12-0 against the Eagles since they started facing them in league play.

But it was Djogo that gave the Irish the lift they needed to beat BC for the second time this season.

"I put him in the starting lineup and man did he deliver for us," Notre Dame coach Mike Brey said.

"Winning and losing in the ACC, everybody needs to be focused at an extremely high level," Eagles coach Jim Christian said. "We weren't in key stretches. That's why you lose."

Notre Dame saw its lead sliced to 69-68 on Hamilton's 3-pointer from the left corner before Gibbs had a driving basket on the other end, and, after a turnover by BC, Djogo blew by his defender for a layup, making it 73-68 with 1:29 to go.

The Eagles kept their deficit within two possessions until Bowman's foul-line jumper pushed them ahead 52-50 midway into the second half, their first lead since the game's opening minute.

After that, the teams were tied twice before the Irish moved back in front, making it 64-59 on Gibbs' layup with just over six minutes to play.

The Irish had opened a 31-21 lead on Hubb's 3 from the right wing en route to their edge at the break.

Notre Dame: Looks like the Irish may have found an additional offensive player to help in what's started out as a tough season. Djogo entered averaging just 1.9 points per game and was playing only 8½ minutes per contest.

Boston College: The Eagles will likely remain buried near the bottom of the conference standings with two tough games — at both Duke and Syracuse this week. ... Freshman Wynston Tabbs, the team's second-leading scorer, was sidelined with a left knee injury, his fourth game in five. He had crutches on the bench.

Notre Dame lost by 22 points to second-ranked Duke and by 27 to No. 3 Virginia before facing the Eagles.

"We needed a win," Brey said. "Our group was a little wounded out last weekend, so maybe we can build on it."

BC had 15 offensive rebounds to Notre Dame's five, but Christian was more concerned about defensive lapses down the stretch.

"We got a lot of second-chance points," he said. "It was just key stops."

Despite both schools being near the bottom of the ACC standings, there are some nice individual seasons going on.

Mooney entered as the only player in the country averaging double figures in points (14.4), rebounds (10.8) and shooting over 40 percent on 3-point attempts (44.7). He added 13 boards Saturday and hit his only 3-point attempt.

Bowman came in as the only player averaging at least 20.5 points, 7.7 rebounds, 3.6 assists, 1.4 steals and 0.6 blocks per game. He had 10 boards and three assists in the loss, and also scored in double figures in his ACC-best 29th straight game.

Notre Dame: At Miami on Wednesday.

Boston College: At No. 2 Duke on Tuesday.