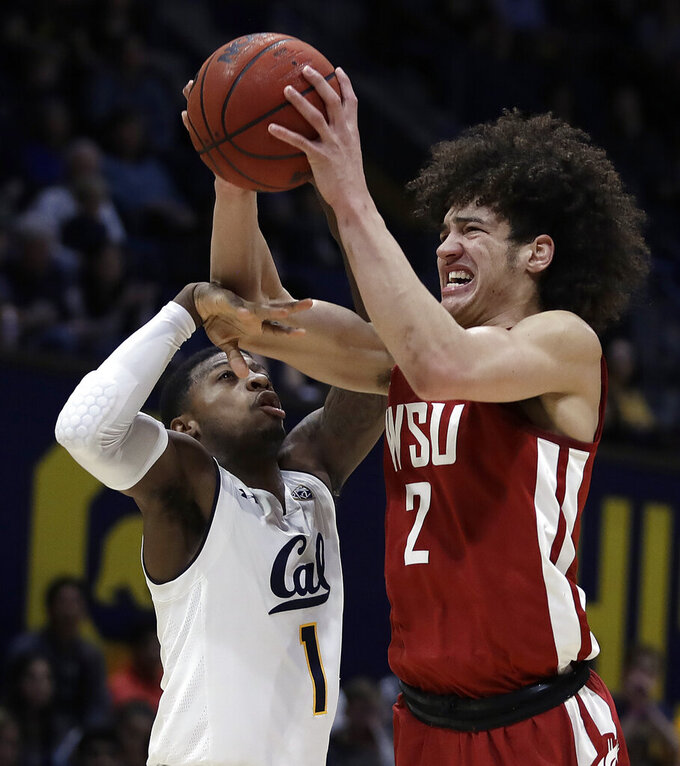 The biggest win during Kyle Smith's first few months on the job at Washington State was keeping one of the stars he was inheriting from moving on to the NBA.

CJ Elleby tested the NBA waters after former coach Ernie Kent was fired before ultimately deciding to return to Washington State and giving Smith a chance.

"I felt like I could test the NBA waters and see how far I could go," said Elleby, who averaged 14.7 points as a freshman last year and is the team's top returning scorer. "It was fun. I got to do different tests and be around good players and see where I was at."

But he was also willing to listen to Smith about his vision for trying to turn around the Cougars program.

"Once I got to be around him and got to know him for a little bit, I was very comfortable staying at Washington State," Elleby, a 6-foot-6 forward who also averaged 7 rebounds a game, said. "He's very clear in what he wants and makes it very clear on how we're going to get there."

Smith was finally given his shot at a major college job when Washington State came calling. Smith was at San Francisco the previous three years, winning at least 20 games each season. He understood why Elleby was looking around.

"He has the most to lose by having a coaching change," Smith said. "For him to opt back in and embrace what we're doing is special."

Elleby's size makes him versatile and optimal in Smith's system. Elleby recently was selected to the All-Pac-12 preseason first team.

"You kind of play him as a point forward at times," Smith said. "We'll put him in the middle of the floor in a lot of situations."

Along with new players Smith has brought in, the entire group will be tasked with implementing an analytic-driven approach to basketball known as "Nerdball."

"The coaches have found a way to give a number value to things that were previously un-statable," said Pollard, who averaged 4.8 points and 2 rebounds per game. "They have their own set of metrics and things that they look at. Things that most people wouldn't even try to get a point value to."

Kent was fired after Washington State went 11-21 overall, 4-14 in the Pac-12 during his fifth season. Kent was supposed to revitalize the Cougars, but instead the program fell into a deeper hole. The Cougars haven't made the NCAA Tournament since 2007 when Tony Bennett was in charge. They've finished with a losing record in seven straight seasons and attendance has nosedived.

Pollard acknowledged it can be tough to recruit top players to remote Pullman.

"I think Pullman is the greatest place on Earth, but I'll admit that maybe you need an alternative way of thinking if you're going to win there," Pollard said. "Coach Smith has us looking at the game in a totally new way."

The biggest loss for Washington State was the graduation of talented forward Robert Franks, who led the Pac-12 in scoring last year at 21.6 points per game. Along with the return of Elleby and Pollard, Smith brought in seven freshmen in Carter Sonneborn, DJ Rodman, Volodymyr Markovetskyy, Ryan Rapp, Noah Williams, Brandon Chatfield and Ben Olesen.

Rodman is the son of former NBA star Dennis Rodman. The younger Rodman is a 6-foot-6 forward and averaged 24.2 points and 8.9 rebounds as a senior in high school.

Washington State was picked to finish 11th in the Pac-12 preseason media poll, just ahead of California.

Washington State tends to play a manageable nonconference schedule, and this year is no different. The Cougars' first test will come against Nebraska in the Cayman Islands Classic and they will host New Mexico State in Spokane. Otherwise, it's a group of mid-majors before the Pac-12 season begins. "I had zero input on the schedule," Smith said. "It was done ... thank you, previous staff." Smith noted the schedule was different from what he was used to at Columbia and San Francisco. "I'm used to having two or three high-major games. I've got 20," Smith said. "So, it's plenty."