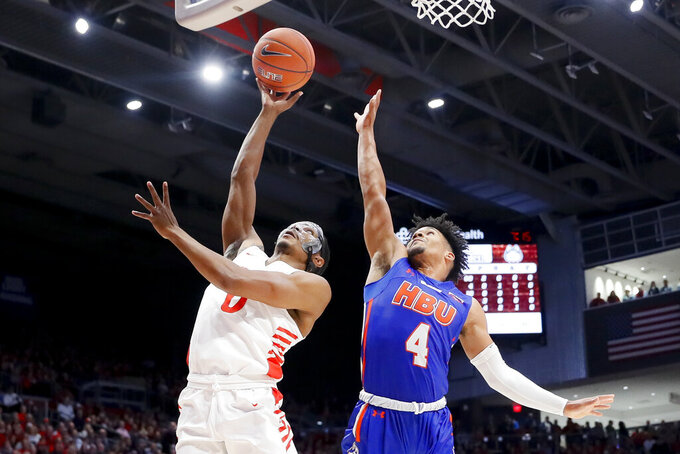 DAYTON, Ohio (AP) — Obi Toppin soared to corral a rebound with his left hand and slammed the ball down, his emphatic dunk the signature moment of Dayton’s return to the rankings.

Toppin scored 17 points and had that dunk off one of his 10 rebounds Tuesday night, leading No. 19 Dayton to a 99-68 victory over Houston Baptist.

The Flyers (6-1) vaulted into the Top 25 after an impressive run at the Maui Invitational that included drubbings of Georgia and Virginia Tech followed by an overtime loss to Kansas in the title game. Dayton hadn’t been ranked in the Top 25 since February 2016.

Back on the mainland, Dayton struggled before pulling away from the depleted Huskies (0-6), who are in a brutal opening stretch of road games. They’d given up 100 points in each of their last three losses against Texas Tech, Michigan and Houston.

The Huskies led for much of the first half, before Dayton’s size and depth started wearing them down. The Flyers looked as though their first ranking in years had softened them a bit.

“You’re human — OK, 19th in the country, you get a little bit of a big head,” said Trey Landers, who had 16 points and eight rebounds. “I think it was good that they humbled us a little bit. So we needed that.”

Their best player was the constant.

Toppin was the Atlantic 10’s top freshman last season and has been the catalyst in the Flyers’ breakout run, scoring at least 20 points in all but two games. The forward opened the game with a dunk on an alley-oop pass from Jalen Crutcher and went high to snare a rebound with his left hand and slam it down.

Toppin finished with his third double-double of the season in only 24 minutes.

“Obi is Obi,” Landers said. “Everybody else, we play to our strengths. We’re just starting to figure out what we can do individually.”

Jalon Gates led an early Huskies surge, scoring 16 points in the first eight minutes. He was the focus of Dayton’s defense the rest of the way and got off only three more shots, missing them all. Ian DuBose, the All-Southland Conference guard, started despite a sore ankle and had 18 points in 32 minutes.

The Huskies threw a chill into the Flyers early as Gates made five straight shots — four from beyond the arc — for a 22-13 lead, silencing the crowd at University of Dayton Arena. But the Flyers started wearing down Houston Baptist late in the first half. Jhery Matos hit back-to-back 3-pointers during a 10-0 run that put Dayton up 40-35.

“When you’re dealing with young people, sometimes you have to get a reality check,” Dayton coach Anthony Grant said. “Maybe the first 10 minutes tonight was something of that.

“A lot of our errors in the first half were mental things. They got about 16 points off our mistakes. At halftime, it was more about being able to flush whatever happened and come out and play the way we felt we were capable of playing.”

The Flyers made 15 of their first 22 shots in the second half while pulling away.

Dayton: The Flyers got one home game between tournaments. They head to Phoenix for the Basketball Hall of Fame’s Colangelo Classic next weekend.

Houston Baptist hosts Samford on Saturday, the Huskies’ only home game in their first 10.