Revamped backcourt helps No. 23 Purdue get past Green Bay 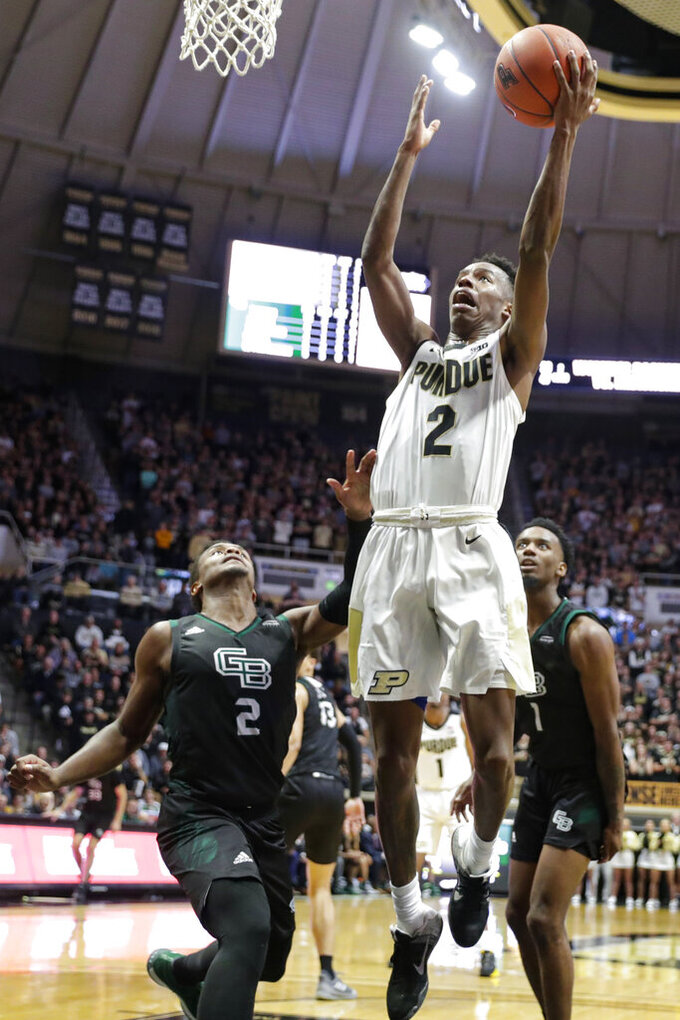 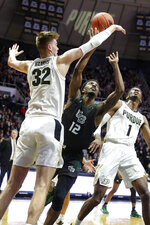 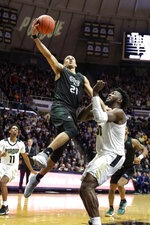 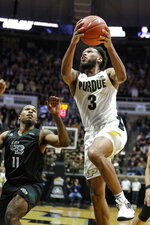 If the new tag-team tandem keeps operating at peak proficiency, the Boilermakers again could pose major problems for opponents.

Proctor scored 26 points in his first game at Mackey Arena, Hunter added 15 and No. 23 Purdue pulled away from Green Bay for a 79-57 victory — the Boilermakers' seventh straight opening-night win.

"I just know when the (shot-clock) is winding down it's time to go make a play," Proctor said, noting it was the biggest crowd he's played in front of. "Most of the time I don't like settling for jump shots because the defense is, nine times out of ten, going to foul you if you get to the basket."

The style change was obvious right from the start.

Rather than having Carsen Edwards and Ryan Cline pull defenses out with 3-pointers, Proctor and Hunter challenged the Phoenix by driving to the basket.

Together, they were virtually unbeatable.

Proctor, a graduate transfer from High Point, went 11 of 17 from the field while grabbing five rebounds. Hunter, who made only one start last season as a freshman, was 7 of 14 from the field with four rebounds and six assists.

The Boilermakers considered it the perfect ending on a celebratory night on which they unveiled their 24th Big Ten championship banner and played highlights from last season's Elite Eight run.

But it certainly wasn't what Green Bay coach Linc Darner envisioned when he scheduled the return to his alma mater.

"He had a great game and when he gets going downhill there," Darner said, referring to Proctor. "It was hard to guard, we've got to do a better job of helping."

The Phoenix (0-1) never really had a chance after giving up the first eight points and falling behind 14-2 less than six minutes into the game.

Freshman Amari Davis scored six of his 10 points during an 8-0 run that got Green Bay within 14-10, but Purdue scored the next eight to make it 22-10 and the Phoenix never seriously challenged again.

"You've got to be able to cut through the paint, you got to be able to get the ball in and get angles and attack people in different actions," coach Matt Painter said. "I thought those guys (Proctor and Hunter) were able to do that."

Green Bay: Darner's team just couldn't match Purdue's size or depth. But the Phoenix managed to stick around long enough to show why they could be a legitimate Horizon League contender.

Purdue: The Boilermakers certainly can play defense. They held the usually high-scoring Phoenix without a 3-pointer in a first half during which they also forced 10 turnovers. They just need to find a quicker knockout punch.

The only real score for Purdue was the wrist injury starting guard Nojel Eastern sustained when he was fouled with 5:30 to go in the first half.

After a brief delay, the junior walked to the end of the bench with a trainer and then headed straight for the locker room. He returned before halftime with his left wrist taped, then appeared to re-injure himself wrist with less than six minutes to play.

Again, Eastern walked to the end of the bench with the trainer and this time did not return.

Painter described it as a hand injury and said only that it was not broken.

Green Bay: The Phoenix shot 36.5% from the field and went 8 of 21 on 3s after scoring 81.3 points per game last season. ... Green Bay has lost 11 straight against Big Ten teams. ... Darner's streak of alternating losses and wins through his first five season-openers continued. He's now 2-3 on opening night. ... Purdue had a 44-16 scoring advantage in the paint.

Purdue: Painter improved to 14-1 in season openers at Purdue. ... The Boilermakers have won 16 in a row against Horizon League foes, 18 in a row at Mackey Arena and 20 consecutive home games against non-conference foes. ... Matt Haarms had 16 points and seven rebounds. ... Aaron Wheeler finished with 10 points and nine rebounds. ... Painter said he plans to redshirt freshmen Mason Gillis and Brandon Newman.

Purdue hosts Texas on Saturday in an early-season matchup between power-five conference schools.