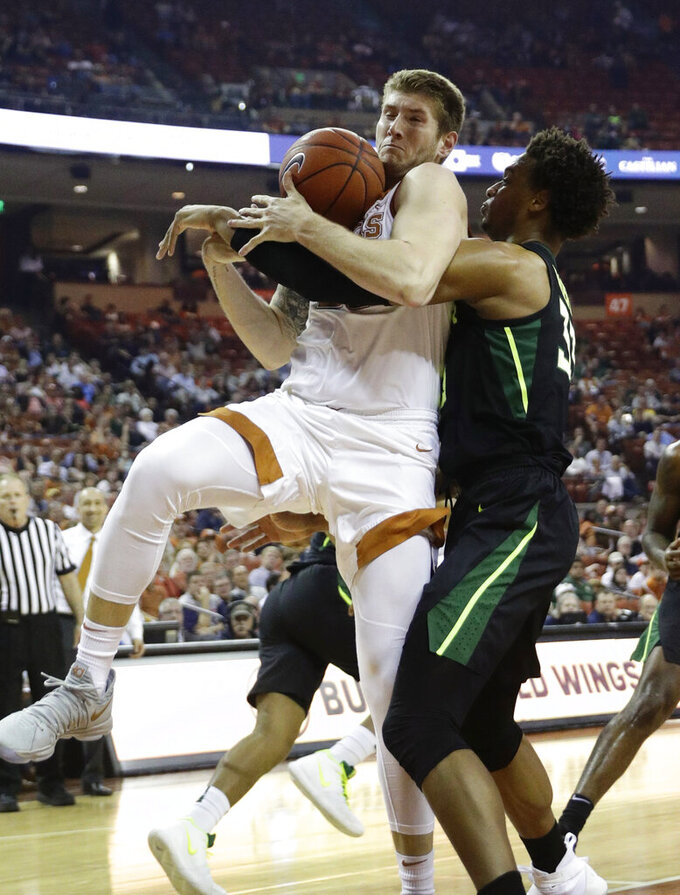 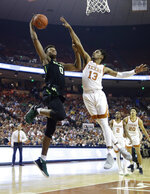 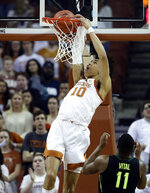 AUSTIN, Texas (AP) — Baylor's surprising run to the top of the Big 12 is over and the Bears now find themselves knocked down a notch.

Kerwin Roach II scored 21 points, Matt Coleman III added 18 and Texas cruised to an 84-72 win Wednesday night that ended Baylor's six-game win streak and dropped the Bears out of a tie for first place in the league.

"We were very aware of the conference standings," Roach said. "They blew out TCU and (Oklahoma) ... We just drew a line in the sand and stood up."

Baylor's win streak ran into a Texas team that could hardly miss on its home court. The Longhorns shot 61 percent in the first half, led by 15 at halftime and were in control the entire way.

The Longhorns (13-10, 5-5) had lost five of their previous six, but like earlier wins over Oklahoma and Kansas, dug deep for a home victory that keeps Texas in play in the Big 12.

Texas could do almost nothing wrong on offense, with soaring alley-oop dunks, tough baskets in traffic and big 3-pointers in the second half that knocked out any hopes of a Baylor rally.

Defensively, the Longhorns shut down Baylor guard Makai Mason, who had scored 40 points a few days earlier against TCU. Baylor coach Scott Drew said Mason was limited because of a foot injury two days earlier and he played only 23 minutes.

"Texas really came out and took it to us," Drew said. "Defensively we didn't have any answers. We didn't stop anybody all night long."

Texas built the lead as high as 16 in the first half as the Longhorns could hardly miss. Coleman opened the game with a 3-pointer and his second one bounced high and around the rim before falling in.

The Longhorns led by 17 in the second before Baylor finally made a run to cut the lead to 53-45. Texas quickly ended the rally when Jase Febres made consecutive 3-pointers from nearly the same spot on the right wing.

Roach made another 3-pointer and a tough shot in the lane to beat the shot clock and Texas was back in control with 10 minutes to play. Roach and Coleman combined to shoot 11 of 15 from the floor. Coleman also had a team-high five assists.

Baylor: The Bears weren't bad on offense in the first half but didn't have the firepower to keep up with Texas' torrid shooting. The barrage of 3-pointers that flew during the winning streak could have kept it close but never materialized. The Bears averaged nearly 11 per game during the streak but made just seven against Texas. Mason scored five points in the first half and took just one shot from long range.

Texas: The Longhorns are in position to make their own run in the Big 12 over the next two weeks. The travel to West Virginia before hosting conference leader Kansas State and Oklahoma State. The Mountaineers and Cowboys are sitting at the bottom of the Big 12 and Texas beat Kansas State on the road in the first matchup this season. With perennial power Kansas vulnerable this season, the Big 12 crown is out there for someone to go get it.

"We have eight games left," Coleman said, "and it's wide open for the taking."

Drew got tired of watching his Bears rack up foul after foul in the first half with barely a whistle directed at the Longhorns. He finally complained loud enough to draw a technical foul with about 4 minutes left in the first half when Baylor had 11 fouls to Texas' four. Texas made 13 of 19 free throws in the first half.

"I was trying to help (the officials) out," Drew said with a smile when asked about the technical.

Texas freshman Jaxson Hayes, who has been generating buzz as a potential one-and-done headed for the NBA, had another solid game with 5-of-7 shooting for 12 points. He also made two big plays early in the second half that kept Texas in control. After giving up a ferocious dunk to Baylor's Mario Kegler, Hayes answered with a rim-shaking alley-oop dunk of his own and followed that by hustling back to get a block on the other end.