Robinson-Earl leads No. 17 Villanova past Bulldogs, 83-76 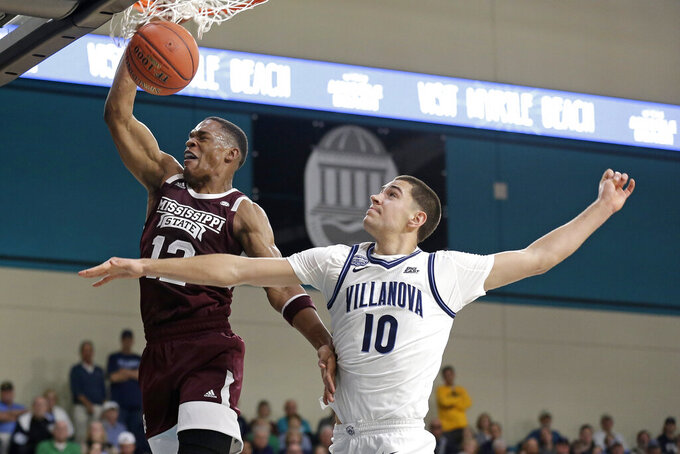 CONWAY, S.C. (AP) — These Villanova Wildcats don’t know what it’s like to lose an in-season holiday tournament game. One of their youngest players wouldn’t let them find out.

Villanova (4-1) will face No. 24 Baylor in the title game. Baylor beat Coastal Carolina 77-65 in the second semifinal.

Collin Gillespie added 18 points, Saddiq Bey finished with 17 and Jermaine Samuels had 14 and converted a key three-point play in the closing seconds for the Wildcats.

They shot 59%, made at least 10 3-pointers for the second straight day and never trailed in the second half, advancing to the championship round of their in-season holiday tournament for the seventh straight year. Villanova has won titles in each of the previous six years.

“It means everything because we play for those who came before us,” Robinson-Earl said. “And those guys have gone through everything and they’ve set the tone for us to go out there and play Villanova basketball for 40 minutes every night.”

Tyson Carter scored 22 points to lead Mississippi State (5-1), and his layup with just over a minute left pulled the Bulldogs within 77-74.

Villanova milked the clock before Robinson-Earl was fouled on a dunk attempt with 35.1 seconds to play and hit two free throws. Carter then airballed a deep 3-pointer with 27.8 seconds left, and Samuels sealed it with his three-point play with 13 seconds left.

Reggie Perry had 18 points and 10 rebounds and Robert Woodard II added 17 points for the Bulldogs.

Villanova: This certainly counts as a close call for the Wildcats, whose first four games — three wins over mid-majors, and a loss to No. 10 Ohio State — were all decided by at least 20 points. It turns out they needed every bit of the cushion an early 16-0 run provided to maintain their lead throughout the final 20 minutes.

“We’ve gotten gradually better from the Ohio State game, but we knew today gradually wasn’t going to do it,” coach Jay Wright said. “We were going to have to execute better, be more solid on the boards, more solid defensively and we were. We took a step today.”

Mississippi State: There were questions about how good the Bulldogs really are, because their five victories have come against mid-majors with none ranked higher than No. 154 in Ken Pomeroy’s efficiency ratings. They hung with their first Top 25 opponent, closing within one possession down the stretch, but couldn’t come up with the key plays that would have put them over the hump.

“Just knowing the intensity was there the whole game,” Woodard said. “We need to learn to keep that intensity and as far as defensive assignments, we let some things get away from us. We’ll mainly look at the defensive and we’ll be smarter on offense.”

Mississippi State had a chance to take its first lead of the second half when the Bulldogs had the ball down 51-50 with about 13½ minutes left. D.J. Stewart missed a jumper and Woodard couldn’t stick back the rebound. Villanova then responded with consecutive 3s by Robinson-Earl and Samuels.

Samuels had the dunk of the day late in the first half. He swooped in from the wing and delivered a one-handed posterization of Woodard that put the Wildcats up 31-22 with just under 6 minutes left in the half.

Villanova: Plays No. 24 Baylor on Sunday in the championship.