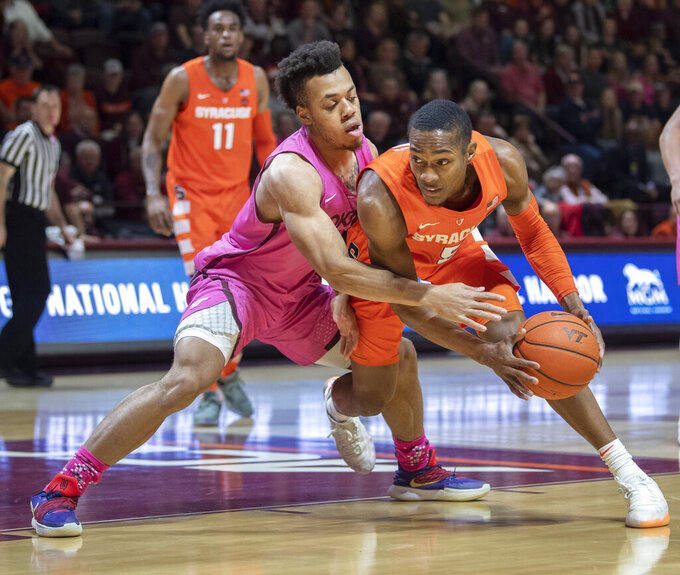 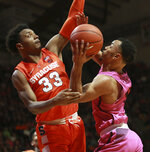 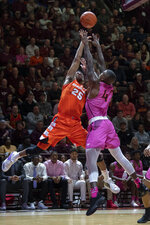 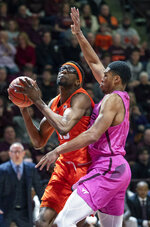 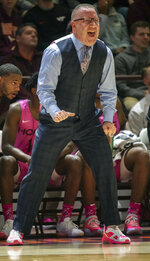 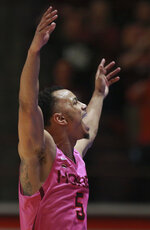 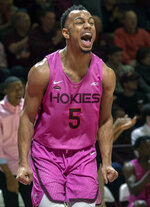 BLACKSBURG, Va. (AP) — Justin Robinson called No. 10 Virginia Tech's game against Syracuse "the biggest game of our careers since we've been here," coming as it did after the Hokies absorbed a 21-point loss on the road at No. 11 North Carolina.

Robinson, especially, made sure they got back on track, scoring 24 of his career-high 35 points in the first half as the Hokies grabbed an early double-digit lead, weathered a second-half surge and pulled away again to beat the Orange 78-56 on Saturday night.

His first-half scoring matched what the Orange did against an improved Hokies defense.

"Sometime I can be too passive and my teammates tell me that," Robinson said. "When my teammates told me to keep going, that's what I did. They told me it's my time. You're making everything. Keep shooting."

Robinson had never before made more than four 3-pointers in an Atlantic Coast Conference game, but had seven by halftime and finished with a school-record nine on 13 tries. He also had eight assists, passing Bimbo Coles as the program leader with 548.

"People will remember this night for him," teammate Ahmed Hill said.

"I told him every time you are wide open just shoot the ball and don't worry about it. You always pass the ball to us and tonight is your night," Hill said.

"We did a very poor job finding Robinson," Orange coach Jim Boeheim said. "Once a guy makes two or three, you can't get off him and we did. ... Nobody within 10 feet of him. Our defense has very seldom allowed anybody to do that."

Oshae Brissett scored 16 to lead Syracuse and Frank Howard had 13, while Tyus Battle and Elijah Hughes, their top two scorers, had 10 and six, respectively. Hughes, who averages 15.3 points, had an especially difficult night, shooting 2 for 13 with four turnovers.

Robinson said he told the team at halftime to win the play leading up to the first media timeout of the second half, but instead, the Orange had their run. "Our old team would have folded and tonight I think we grew as a team and battled back and made a big lead again."

The Hokies finished with 25 field goals, 23 of which were assisted, including all 11 in the second half.

Robinson and Nickeil Alexander-Walker each finished with eight assists.

Syracuse coach Jim Boeheim though a bad offensive start doomed the Orange at both ends.

"I think our offense was so bad early in bled over into our defense," Boeheim said. "We didn't concentrate on what we need to do."

Syracuse: The Orange arrived ranked ninth nationally in field goal defense, but allowed the Hokies to make 14 of 26 shots, including 10 3-pointers, in the first half. Robinson was 7 for 8, all on 3s, in the half. Virginia Tech finished 25 for 48 from the field for the game, 52.1 percent.

Virginia Tech: The Hokies played perhaps their best half of basketball this season in the first half, making more 3-pointers, 10, than Syracuse made field goals, nine. They had 12 assists on 14 field goals, forced nine turnovers and scored 13 points off those takeaways. The Orange, meantime, scored just two points off seven Virginia Tech mistakes. The Orange also had four shot-clock violations in the game.

Syracuse: The Orange play Game 2 of a three-game road swing at Boston College on Wednesday night.

Virginia Tech: The Hokies go back on to road to face Miami on Wednesday night.