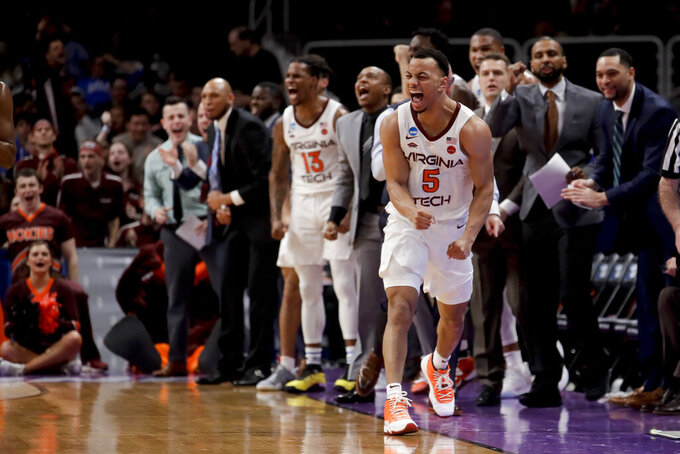 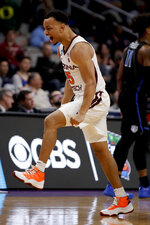 SAN JOSE, Calif. (AP) — Having star point guard Justin Robinson back on the court was music to the ears of Virginia Tech coach Buzz Williams.

Specifically for Williams, it was the relaxing feeling he gets when listening to the Eagles playing their soft rock classic "Peaceful Easy Feeling."

"When 5 has the ball, I think everybody feels that way," Williams said Saturday, referring to Robinson's uniform number. "Our guys don't listen to that genre of music. When 5 had the ball yesterday, I know statistically it wasn't his normal game, but in the 27 minutes he played he was a big part of handling Saint Louis' pressure, handling their physicality. Because when he has the ball, you know he'll make the right decision."

After shaking off some rust in the 66-52 win over the Billikens, Robinson is ready to build on that performance and go on a long tournament run when the fourth-seeded Hokies (25-8) take on 12th-seeded Liberty (29-6) in the second round in the East Region.

"To be able to play how many minutes I played last night was big for my team and big for my confidence," Robinson said. "There were a couple of shots that I'd normally hit that I missed. I had four turnovers. That's not like me. That's something I'm not happy with. But being able to get out there and play again was big for me. Being able to get the rust off is something I can build on."

The Hokies managed to go 7-5 in Robinson's absence, beating perennial power Duke at home and losing only once to an unranked team in the process. But it didn't mean his presence wasn't missed.

Williams said he's had few players better in his coaching career at translating his lessons to the players on the court to make sure the team operates at peak efficiency.

Robinson came into the game with 13:39 to play in the first half. He had a steal that led to a fast-break basket by Ahmed Hill and then made his first shot he took, a 3-pointer, prompting him to yell, "I'm back!"

He finished with 9 points and two assists in 27 minutes, but helped handle the pressure that kept Saint Louis at bay in the second half. He got a hug from Williams on the sideline after he came out of the game in the final minute.

"You almost feel the presence," teammate Nickeil Alexander-Walker said. "We've had good starts offensively without him but you almost see glimpses of what we were in nonconference, how everything flows just a little bit better. You really feel a presence. Having an all-conference guy back just doing what he does, even if it's just a little bit, it helps a lot to our offense. Now we add another weapon, another threat. ... Just having him back was huge."

His impact is no surprise to the Flames, who saw him up close back in November in a charity exhibition. Robinson led all scorers with 20 points that game as Virginia Tech won 86-70.

"I think he's a pro. He's got unbelievable vision. What he brings to Virginia Tech is a heightened sense of confidence," Liberty coach Ritchie McKay said. "Obviously he'll probably have to shake off some rust, but he's a terrific player. He's one of the best guards that we've faced all year. And we've faced some really good ones."