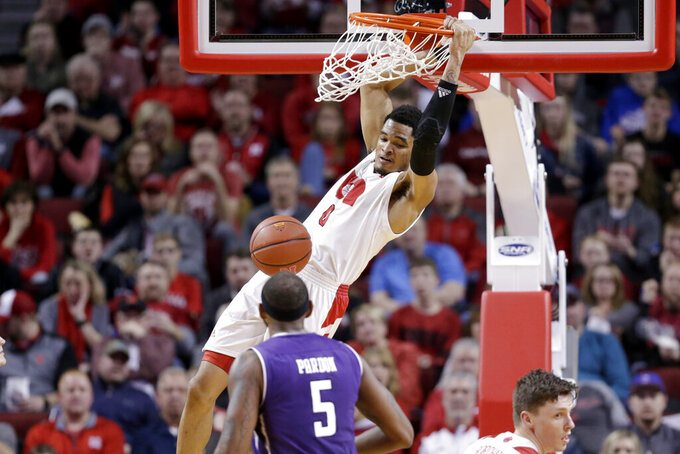 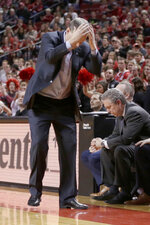 LINCOLN, Neb. (AP) — Isaiah Roby had a double-double to lead Nebraska to a 59-50 win over Northwestern on Saturday night. But that wasn't all Roby contributed to the victory

"He had those two blocks early and kind of sent a message," said Nebraska coach Tim Miles. Then he went away for a while from that rim protection type of thing. But boy he ended the game with a flourish.

"Just look at his line - 19 points, it wouldn't have been hard to have more than that, he has 16 rebounds, 5 offensive. Then you go through and he has five blocks, two assists, two steals, no fouls. We have an IER chart, individual efficiency. His numbers will be through the roof."

Roby attributed his play to being challenged at halftime, actually "most of the time, anyway. I got challenged by my teammates to be more aggressive on both ends. I'd say that was the biggest thing for me ... Everybody did (challenge him). I look at them as my brothers, so I expect them to keep it real with me. I appreciated it."

The Cornhuskers trailed just once in the last 35 minutes of the game, but they never led by more than seven until it went up 50-41. Glynn Watson Jr.'s layup with 4:36 left. Watson's 3-pointer on their next possession gave the Huskers a 53-41 lead, capping an 11-0 run.

Northwestern clawed back to take a 36-35 lead on Dererk Pardon's hook shot with 14:27 left as Nebraska hit just three of its first 15 second-half shots. But the Huskers responded with a Roby 3-pointer and a Tanner Borchardt follow shot to go back up by four.

The Wildcats repeatedly cut the lead to one. Then saw Nebraska's defense, which switched from man-to-man to 1-3-1 zone force six turnovers in a five-minute stretch to trigger the 11-0 run.

"We just had that little stretch against the zone was really a killer for us," said Northwestern coach Chris Collins. "We had some real critical live ball turnovers during that stretch that give them separation."

Nebraska got the win despite shooting just 33 percent from the field. The Huskers outscored Northwestern by six from the free-throw line and had just one more field goal and one more 3-pointer than the Wildcats, who shot 35 percent.

Vic Law led Northwestern with 15 points. Pardon had 13 and Anthony Gaines had 10.

Nebraska: The Cornhuskers are 5-1 in their last six meeting with Northwestern, and have won three straight at Pinnacle Bank Arena.

Northwestern: Pardon continued his strong play against Nebraska, scoring 13 points on 5-of-12 shooting and pulling down 12 rebounds. In five previous games against Nebraska, Pardon has averaged 16 points, 11 rebounds, shooting 72 percent from the field.