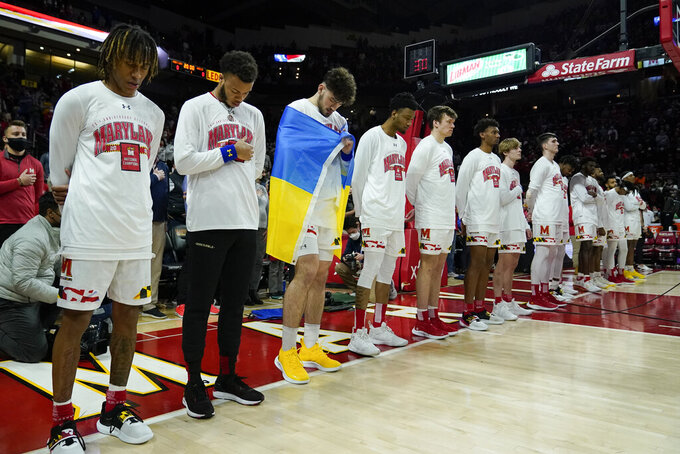 Maryland forward Pavlo Dziuba, third from left, who was born in Kyiv, Ukraine, is draped in a flag of Ukraine as he and his team stand for the United States national anthem prior to an NCAA college basketball game against Ohio State, Sunday, Feb. 27, 2022, in College Park, Md. (AP Photo/Julio Cortez)

“They’ve got a lot of good players on their team, and we just had to contest their shots,” said Donta Scott, who had 14 points, nine rebounds and three steals for Maryland.

Ohio State’s E.J. Liddell, who entered the game as the Buckeyes’ leading scorer by averaging 19.6 points, was held to 11 points. And freshman star Malaki Branham, who averaged 26.7 points in his previous three games, had only 13 to lead the Buckeyes.

“We weren’t as prepared and ready as we should be,” Ohio State forward Kyle Young said.

Maryland first took the lead with 8:07 to play in the first half after Ayala hit two free throws, which were the first of 11 straight points. The Terrapins had a 32-28 advantage at the half.

Branham hit a 3-pointer with 8:08 remaining in the game to cut Maryland’s lead to 53-50. Ayala followed with a layup and, after a collision with Ohio State’s Zed Key, two free throws to increase the lead to 57-50. Key injured his right ankle and had to be helped off the floor.

Maryland forward Pavlo Dziuba was born in Kyiv, Ukraine, and draped himself in the Ukrainian flag in the pre-game huddle. Dzuiba’s teammates wore blue wristbands in sympathy.

“He has family members there, friends, people that he cares for,” Maryland interim coach Danny Manning said. “It’s just to let him know, to support him, to love him and thoughts and prayers.”

Young knows that the loss won’t help Ohio State as it prepares for the postseason.

“We had a pretty good chance at a Big Ten championship and you lose a game on the road,” he said. “It hurts.”

Maryland’s 2002 national championship team was introduced late in the first half. Gary Williams, the Terrapins’ longtime former coach, and his players spoke to the current team before the game.

“You felt their presence there,” Russell said. “Coach Williams said a couple words and he gave us motivation. When he talks, everybody listens. He’s a legendary coach … We went out there and tried not to disappoint them.”

Russell surpassed 2,000 points with his 3-pointer early in the game. After four years at Rhode Island, he’s finishing his career at Maryland.

“I’ve been through a lot,” Russell said.

Ohio State: The Buckeyes were coming off Thursday’s close win at No. 15 Illinois and needed this game to improve their Big Ten and NCAA Tournament seedings. They must play better in their final three games.

Maryland: In a disappointing season, this was perhaps their most impressive win. Inspired by the 20th anniversary of the 2002 NCAA championship team, the Terrapins can hope for a nice run in the upcoming Big Ten tournament.

Maryland: Will host Minnesota on Wednesday and finish the regular season on the road at Michigan State on Sunday.