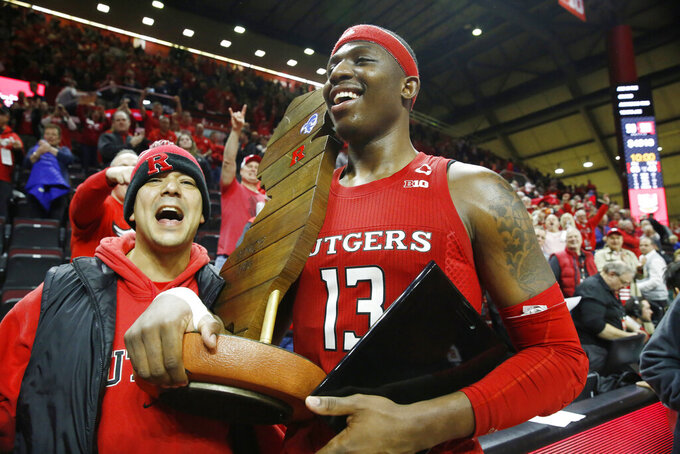 PISCATAWAY, N.J. (AP) — Seton Hall star Myles Powell sat out the second half with a concussion, and Rutgers’ Ron Harper Jr. had 18 points and six rebounds to help the Scarlet Knights beat the No. 22 Pirates 68-48 on Saturday in the Garden State Hardwood Classic.

Powell did not return to the Seton Hall bench in the second half. Sixth in the country at 22.9 points per game, Powell didn’t score his first points until nearly 10 minutes into the game after six misses and a couple missed free throws.

The struggles could be explained by the concussion, as Powell smacked his head on the hardwood after taking a charge 2:24 into the game. He ran into big man Tyrese Samuel later in the half. Seton Hall coach Kevin Willard appeared concerned over the seriousness of his star’s concussion.

“He asked me during the game, he goes, ‘Why are we practicing at Rutgers?” Willard said, adding, “We sat down in the timeout and his eyes kind of rolled in the back of his head and it kind of just hit him like a wave. He got wacked pretty good, and luckily he’s starting to come through it just a little bit right now and we’ll watch him overnight and put him in concussion protocol. With concussions, you just really have to be careful.”

Willard declined to disclose if Powell would have to go to the hospital. He finished with six points on 3-of-9 shooting, missing four 3-pointers.

The loss came on the heels of Sandro Mamukelashvili’s fractured wrist at Iowa State.

Harper won the Joe Calabrese Award — named in honor of the late journalist who covered the rivalry for 38 years — as the most valuable player. He had two early alley-oops dunks. Akwasi Yeboah added 14 points and seven rebounds for Rutgers (8-3).

“It was unexpected, to be honest to you.” Geo Baker said of jumping out to the big lead early. “This game is always a dogfight.”

The last time Rutgers won by this large of a margin was when it defeated Seton Hall by 32 points at the RAC on Jan. 7, 1998.

Rutgers pushed the advantage to 21 in the half and led 36-23 at the break. Rutgers led by 22 in the second half.

Quincy McKnight led Seton Hall (6-4) with 11 points. The Pirates have lost two in a row.

“They came out and threw the first punch and had us on our heels the whole game,” McKnight said.

Seton Hall: The Pirates struggled in their first full game without big man Mamukelashvili and will likely fall out of the Top 25 after coming in the season ranked No. 12.

Rutgers: The Scarlet Knights finished a gauntlet four-game stretch 2-2. After coming into the season with the highest expectations in over a decade, they look like a team that can make the postseason for the first time since 2006, when they made the NIT. Rutgers holds the longest active streak for a Power Five team not making the NCAA Tournament, with the last appearance in 1991.

With the game selling out within hours of the tickets being released, the 8,329 packed inside the RAC made for the largest crowd at the Louis Brown Athletic Center since Feb. 23, 2002, when Rutgers beat Seton Hall 66-60 in front of 8,729.

Seton Hall will return home to the Prudential Center after nearly a month on the road.