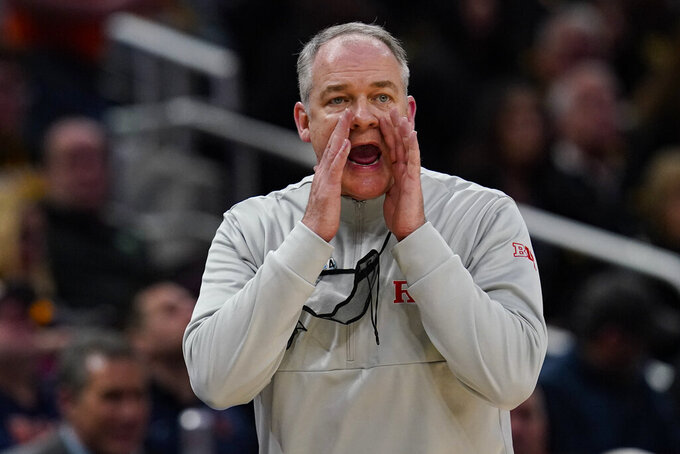 Rutgers head coach Steve Pikiell yells to his team in the first half of an NCAA college basketball game against the Iowa at the Big Ten Conference tournament in Indianapolis, Friday, March 11, 2022. (AP Photo/Michael Conroy)

PISCATAWAY, N.J. (AP) — Rutgers has extended the contract of coach Steve Pikiell through the 2029-30 season.

The school announced the four-year extension Friday, hours before the Scarlet Knights (18-13) were beaten by No. 24 Iowa 84-74 in the quarterfinals of the Big Ten Conference Tournament in Indianapolis.

The deal guarantees Pikiell additional compensation of $16 million, including performance and retention bonuses. He previously signed a contract extension in February 2020 through the 2025-26 season.

In six seasons, Pikiell has led the program to historic heights, including an NCAA Tournament berth last year, its first since 1991. Despite 12 wins in one of the toughest conferences in the country, Rutgers is a bubble team for this year's NCAA Tournament because of some bad losses early in the campaign.

“What Steve Pikiell has accomplished here ‘On the Banks’ is nothing short of extraordinary,” athletic director Pat Hobbs said in a statement. “His leadership is driving success for our young men on the court, in the classroom, and ultimately in life.”

Rutgers became the first unranked program in NCAA history to beat four consecutive ranked opponents, defeating then-No. 13 Michigan State, No. 16 Ohio State, No. 14 Wisconsin and No. 12 Illinois in February. The Scarlet Knights earned their first-ever win over a No. 1-ranked team, topping Purdue on a buzzer-beater at Jersey Mike’s Arena.

Rutgers' 12 conference wins were its most since joining the league, earning it the No. 4 seed in the tournament and a double bye. It has posted three consecutive winning seasons for the first time since 1988-91 in the Atlantic 10.

Pikiell guided the Scarlet Knights last year to their first national ranking in 41 years and the program’s first winning season in 14 years in 2019-20. Rutgers also completed a 20-win season that year, its first since 2003-04.