Rutgers looking for its first winning season since 2005-06 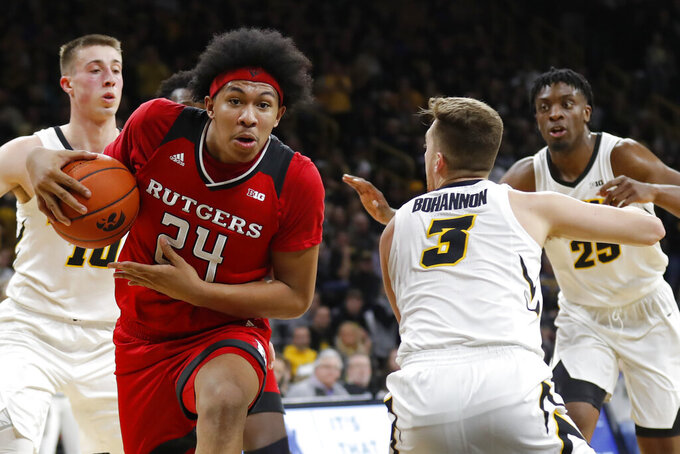 File-This March 2, 2019, file photo shows Rutgers forward Ron Harper Jr. (24) driving to the basket past Iowa guard Jordan Bohannon (3) during the first half of an NCAA college basketball game, in Iowa City, Iowa. The Scarlet Knights have not had a winning season since 2005-06, when they posted a 19-14 record and were selected to play in the NIT. They have had five winning seasons since 1990-91, the last time they made the NCAA Tournament. Now entering his fourth season, Steve Pikiell is the sixth coach attempting to get Rutgers back to the NCAA Tournament.(AP Photo/Charlie Neibergall,File)

PISCATAWAY, N.J. (AP) — This might be the season Steve Pikiell ends the long drought in basketball at Rutgers.

How long, you wonder?

The Scarlet Knights have not had a winning season since 2005-06, when they posted a 19-14 record and were selected to play in the NIT. They have had five winning seasons since 1990-91, the last time they made it to the NCAA Tournament.

Now entering his fourth season, Pikiell is the sixth coach attempting to get Rutgers back to the NCAAs. He has assembled his best team, but whether that's enough to stand up to a Big Ten Conference schedule and go to the show remains to be seen.

The NIT is a definite possibility this season.

"Really, really excited, and we're trying to do something that we haven't done in a long time, and hopefully we've got that mindset and people will enjoy the journey, because this season throws a lot of obstacles at you," said Pikiell, who has posted records of 15-17, 15-19 and 14-17 in his first three seasons, respectively.

Despite losing leading scorer and rebounder Eugene Omoruyi as a transfer (Oregon), Rutgers has size, versatility, speed and a couple of new players who should contribute right away.

"We're deep, and we're going to play a little differently because we can," Pikiell said. "We're very versatile. We're going to have 6-foot-7s, 6-8s across the board, to be able to do some different things, and I really believe in year four here, we now have more solutions to the problems that the league poses."

Guard Geo Baker, guard Montez Mathis and swingman Ron Harper Jr., who all had at least 18 starts last season, are back along with guard Peter Kiss and forwards Shaq Carter and Myles Johnson.

Speedy guard Jacob Young, a transfer from Texas with NCAA Tournament experience, is eligible after redshirting in last season. Graduate student Akwasi Yeboah, who was the leading scorer and rebounder the past two seasons at Stony Brook, also is eligible right away.

Freshman Paul Mulcahy, who averaged a triple-double at Gill St. Bernards in New Jersey last season, also should get time as a 6-6 point forward.

There's a buzz about No. 24 this season. The sophomore averaged a team-high 17 points in a four-game trip to Spain against pro teams. He peaked at the end of last season, scoring a career-high 27 points in an upset of No. 22 Iowa. The son of five-time NBA champion Ron Harper ranked among the conference's top freshmen in blocks, assists, scoring (7.8 points per game) and rebounding (3.1). He had 10 double-doubles.

It's easy to forget about Young since he sat out last year. The junior played in 30 games with five starts for Texas, averaging 13.3 points in his final six games. He had a career-high 29 points against Texas Tech in a Big 12 Tournament game and played in the NCAA Tournament against Nevada. Yeboah had 72 starts at Stony Brook, averaging 16.7 points and 7.7 rebounds last season. Both might start right away.

In addition to losing Omoruyi's points (13.8 per game) and rebounds (7.2), he was the Scarlet Knights' top defender in the middle. That's a big loss and something Carter and Johnson will have handle along with Mamadou Doucoure, who missed most of last year with a back injury.

Things get nasty in December. The Scarlet Knights are at Pittsburgh on Dec. 3 in the ACC/Big Ten Challenge and five days later open the conference schedule at No. 1 Michigan State. It is followed by home games against Wisconsin and No. 12 Seton Hall. The New Year brings nothing but conference games. It includes home-and-home games with No. 7 Maryland and No. 23 Purdue and a road game at No. 18 Ohio State. It's not going to be easy.