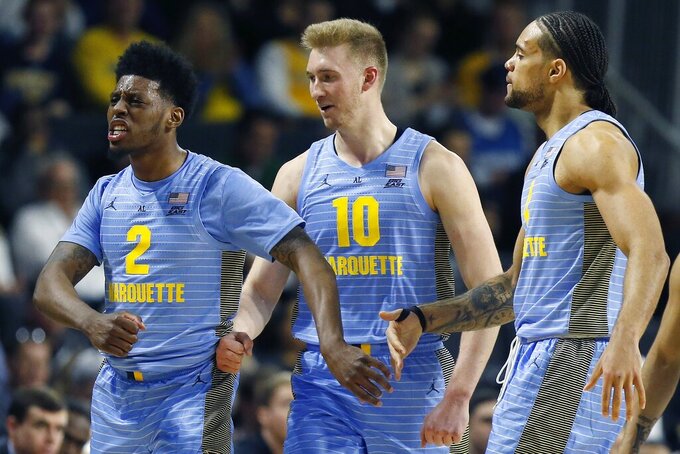 Marquette's Sacar Anim (2) reacts beside teammates Sam Hauser (10) and Theo John (4) after scoring and drawing a foul during the first half of an NCAA college basketball game against Providence in Providence, R.I., Saturday, Feb. 23, 2019. (AP Photo/Michael Dwyer) 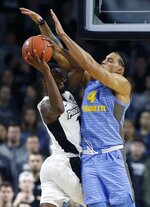 PROVIDENCE, R.I. (AP) — With the Big East's leading scorer slowed by an injury, No. 11 Marquette had to look elsewhere.

Sam Hauser ended a three-game shooting slump with 18 points and pulled down 13 rebounds as Marquette completed a season sweep of Providence on Saturday, 76-58. Sacar Anim added 18 points for Golden Eagles, who are in first place in the Big East with two weeks remaining in the regular season.

"Markus certainly wasn't himself, but it was clear that Providence's game-plan was to make life really difficult on him," Marquette coach Steve Wojciechowski said. "Markus has gotten a lot of credit and he's worthy of it. He's had a magnificent year, but I truly believe the strength of our team is our team. We have a number of guys who are capable of playing very well and have bought into their roles."

Hauser got back on track after three games that saw the junior miss 17 of 28 field goals. He made back-to-back 3-pointers as part of an 18-6 run that put the Golden Eagles up 58-59 with 10:39 remaining. Before the surge, Marquette saw its 11-point halftime lead trimmed to seven (40-33) after two of Providence's freshmen, A.J. Reeves and David Duke, combined to score 11 points.

Anim carried Marquette with 12 points in the first half. Whether it was dropping floaters in the lane or finishing strong at the rim, he proved a tough cover for the Friars, who have lost six of eight.

Joey Hauser, the younger brother of Sam, added 15 points and seven rebounds for Marquette. He was one of five scorers in double figures for the Golden Eagles, who shot 56.5 percent in the first half and 54.9 for the game. They also made 10 of 21 from 3-point range while the Friars went 6 of 20.

Like his brother, Joey Hauser succeeded in turning the page after a three-game stretch that saw him attempt 23 shots, making five.

"My teammates tell me to keep shooting and that's definitely helped me to keep my confidence up," Joey Hauser said. "After you see a couple of easy ones go in, things really start to open up for you."

Alpha Diallo had 19 points and six rebounds for the Friars while Reeves finished with 13 points. Nate Watson added 10 points on nine shots after scoring 21 points in the first meeting against Marquette. Providence went from shooting 27.6 percent in the first half to 50 percent in the second half.

"We had some open looks early, but we're putting a lot of pressure on our defense," Providence coach Ed Cooley said. "We have to a better job on focusing on the little things. I think that's one thing that Marquette does very well."

Marquette: The Golden Eagles are on track to make the NCAA Tournament for the second time in Wojciechowski's five years. They are also in position to claim their second Big East regular-season title. The first one came in 2013 under the direction of Buzz Williams, now at Virginia Tech.

Providence: The Friars are in danger of missing the NCAA Tournament for the first time since 2012. If the season were to end today, they would not receive a first-round bye in the Big East Tournament. Since the Big East rebranded itself five years ago, Providence has avoided playing on the tournament's first night.

TOUGH NO MATTER WHERE

The Big East entered Saturday's action as the only Division I conference in the nation with every team owning an overall winning record.

Marquette travels to defending national champion Villanova on Wednesday. It will be a rematch of a game the Golden Eagles won 66-65 on Feb. 9.

Providence is at Butler on Tuesday. The Friars and Bulldogs have yet to play each other.