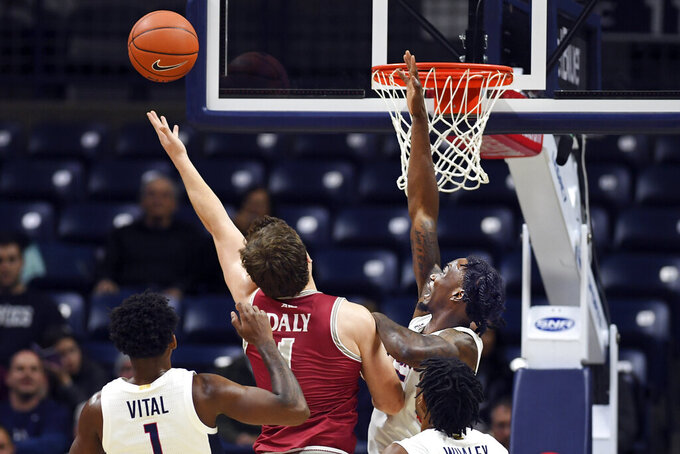 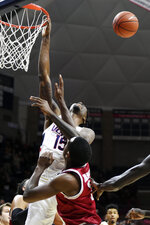 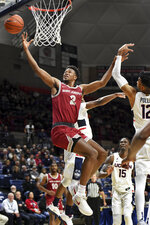 Ryan Daly scored a career-high 30 points as the Hawks jumped out to a 27-point lead and then held off UConn for a 96-87 victory.

Rahim Moore added 22 points and Myles Douglas had 18 for St. Joe’s (2-1), which saw its advantage shrink to three points late, but never trailed.

“We’ll take something from our first half and executing our style and our system and then we found a way to win with toughness in the last eight minutes of the game,” said first-year coach Billy Lange.

Christian Vital had 26 points and Alterique Gilbert added 22 for UConn (1-1).

The Hawks opened the game with a 14-0 run. While UConn missed its first nine shots, St. Joe’s hit five of its first seven, including three of four from 3-point range.

Gilbert paused the bleeding for a moment with UConn’s first basket, a driving layup that came more than four minutes into the game.

But a 3-pointer by Daly pushed St. Joe’s lead over 20-points at 34-12 midway through the first half and the Hawks extended that to 46-19. Daly had 21 points by halftime, hitting five of his first seven shots from 3-point range.

“I honestly hadn’t hit a 3 all season yet,” said Daly. “And I thought about it and today I came out and I was feeling it early.”

UConn went to a pressing defense and quickly cut into that deficit, outscoring the Hawks 21-4 over the next four minutes. The run was capped by a driving layup from Vital that made it 73-69.

The Huskies got as close as 79-76 after two free throws from Vital. But Daly hit a 3-pointer on the other end and St. Joe’s outscored UConn 17-11 down the stretch.

UConn is 6-3 all-time against St. Joe’s. This was the first meeting between the two schools since the first round of the 2014 NCAA Tournament. UConn won that game 89-81 in overtime, beginning their run to a fourth national title.

Coach Dan Hurley said the Huskies have to get the culture back to where it was in those days.

“We have confidence, because it’s all we do,” Daly said. “We shoot the ball; we spread the floor and we’ll live with the results.”

Saint Joseph’s bench outscored UConn’s 27-5, led by Moore who went 6 of 8 from the floor and 9 of 13 from the foul line. UConn’s Vital and Gilbert combined to take 40 of the Huskies 61 shots.

UConn did get some good news Wednesday night. Javonte Brown-Ferguson, a highly touted 6-foot-11 center from Ontario, Canada, announced Wednesday that he would attend UConn next year. Brown-Ferguson, who is just 17, picked the Huskies over Texas A&M and Kansas.

St. Joseph’s continues its three-game road swing with a trip to Loyola Chicago

It doesn’t get any easier for UConn, which wraps up its opening three-game campus homestand on Sunday with a game against No. 15 Florida.