Saint Mary's vows to keep pushing after win over Gonzaga 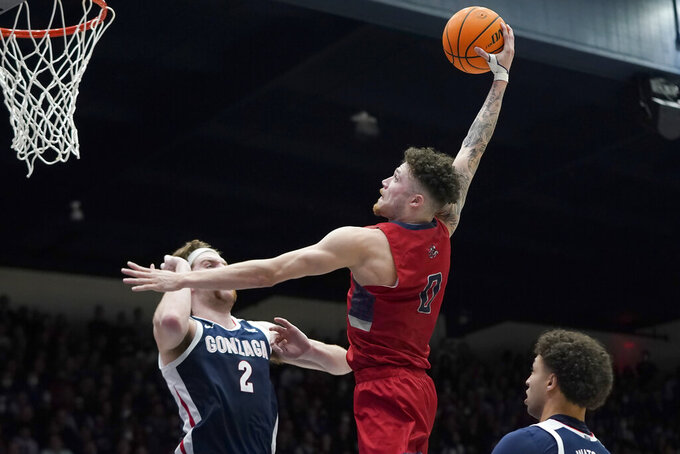 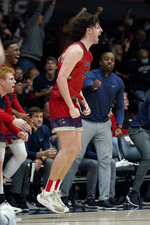 MORAGA, Calif. (AP) — Former Saint Mary's star Omar Samhan showed up on campus unannounced this week, stopped in to visit the coaches then waited to address the triumphant men’s basketball team two days after the Gaels' upset of No. 1 Gonzaga.

The big man’s message Monday after he offered his congratulations: “You haven't done anything yet. Go chase a championship.”

Those simple words meant so much to Logan Johnson, Dan Fotu and the rest of the players. Samhan's commitment to the successful mid-major program more than a decade after he played for the Gaels is the very reason many of them came to tiny Moraga for college.

“It's definitely a brotherhood here, a family-type feel," said Johnson, a senior from nearby Mountain View who played his freshman season at Cincinnati. “You don't get that experience at a lot of places. He expressed how much that win meant to him and how good we should feel about ourselves but also reminded us that we're not done yet. We've got a lot of things we still want to do.”

Even 21st-year Saint Mary's coach Randy Bennett didn't know Samhan planned to speak after flying in for the day from Las Vegas — where the second-seeded Gaels will go this weekend for the West Coast Conference Tournament. Bennett is thrilled Samhan's words resonated with his close-knit group.

“That's really cool. I didn't know how they'd take it,” Bennett said. “... That's great. Our group of players, I have nothing to do with it. Well, I do in that we preach it — it's bigger than you. We kind of end up attracting guys that are about that, a lot of team guys, a lot of guys who are looking for that. Omar, he's got a great message. But it really matters a lot to Omar. He flew in here, he came in here, he wanted to talk to them before the tournament.”

Meticulous attention to detail along with a far reach in recruiting — there are currently players from Australia, New Zealand, Estonia, Lithuania and Turkey — allows Bennett to consistently keep Saint Mary’s winning. And one of the WCC Coach of the Year's former players, Todd Golden, has shined as an opposing coach in the conference at San Francisco.

“Any time you get former players to come back it gives a cool perspective for our guys because it’s someone who’s been through the program and been through the ups and downs,” said Fotu, a senior forward from Auckland, New Zealand.

Bennett leads his own way. He walks through the arena and greets each player with a handshake at the start of practice, jumps in to rebound layups for Australian forward Kyle Bowen and still scribbles out practice plans by hand then has someone make photo copies for the assistant coaches.

“I'm old school,” Bennett said. “I use a yellow pad. I keep them in my files. I'm the worst. I am so habit-oriented.”

The Gaels (24-6, 12-3) moved up four spots to No. 19 in this week's AP poll after toppling the rival Zags 67-57, preventing the Bulldogs from going unbeaten through conference play.

Longtime administrator Tom Carroll had to hold students back from rushing the floor too soon as has happened before, then the final buzzer came at last.

“Such a great game and atmosphere,” said Carroll, who has been at the college since 2005 and witnessed his share of special moments. “There truly is nothing like it in the state of California from my college basketball perspective.”

Gonzaga coach Mark Few acknowledges the daunting road ahead through the conference tournament.

“I've never seen it like this,” Few said of the tough Bay Area stop last week. “These two are both in the top 22 or 23 in the metrics.”

This is hardly Bennett's most talented team, but it is one of his toughest despite not having a star scorer. The Gaels pride themselves on their defense because “we don't have that kind of offensive firepower, yet," Bennett said. “They've embraced it.”

In March 2009, Golden State Warriors star Stephen Curry played his final collegiate game at Saint Mary's when his Davidson team lost to the Gaels in the NIT.

He could sense something special then with the basketball program tucked in the hills of San Francisco's East Bay suburbs.

“I only got one experience, I don't know what the conference games are like,” Curry said. “I'm sure obviously since Gonzaga's No. 1, it was live when I was there so I can only imagine what it was like. The atmosphere, everybody's on top of you and it's very homey, so when they pack it out I'm sure it's pretty rowdy. It gives them a nice little home court advantage.”

Now, the Gaels have to go on the road again. And just as Samhan noted, Saint Mary's believes it has more to accomplish.

“We've got a lot of things that we still want to do, and check off the box," Johnson said. "We've got a lot of people who have been here and done a lot of tremendous things here throughout the years. We know we want to go down as a great team that played here at Saint Mary's and we're not there just yet. We still have a lot more to go.”