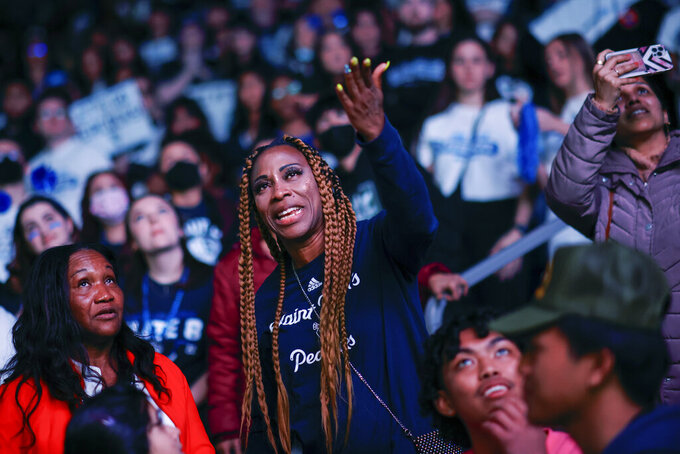 Campus bookstores and suppliers can't keep up with the demand for Peacocks' merchandise. Plans for a parade Friday to honor the team and coaches in Jersey City, New Jersey, keep getting bigger and bigger.

As expected, 45-year-old coach Shaheen Holloway has decided to leave the little Jesuit school and travel less than 20 miles to South Orange, New Jersey, to take the much higher-paying job at Seton Hall, his alma mater.

The Roman Catholic Big East Conference school paid Kevin Willard roughly $2.4 million this past season. He left to take the head job at Maryland. Holloway made less than $300,000 at Saint Peter's.

“I’ve talked to Shaheen, but it’s only been about to congratulate him and to tell him how grateful we are for what he’s done," Cornacchia said Wednesday. "We’re focused on just having a blast on Friday.”

Cornacchia said the past two weeks have been a hectic blur, and it was only a day or so ago he had a chance to consider the Peacocks' improbable run to become the first No. 15 seed to reach the Elite Eight. It ended Sunday with a one-sided loss to North Carolina.

“I had hoped for a successful season with this team and a good outcome of the MAAC (Metro Atlantic Athletic Conference) championship,” he said. “We got that, but I could never have envisioned that we would do what we did. As much as you believe in your team and all, you don’t really believe it’s possible until it happens.”

Cornacchia said the school has been swamped with requests from around the country for merchandise. He even got a letter from somebody in Australia who saw the team on television.

“I don’t even know how that works, how they saw it over there, but all around the world now, people know Saint Peter’s University,” Cornacchia said. “So this is an extraordinary moment, not only for our athletic program, but for the university. I tell everybody we’re going to ride this and we’re going to build on it."

Cornacchia had some tangible returns on what the wins over No. 2 seed Kentucky and No. 7 seed Murray State did for the university the first week of the tournament. That was before an upset of No. 3 seed Purdue in the Sweet 16.

Applications were up 56% compared to the same time in 2021 and contributions rose from $500,000 for the corresponding week to roughly $2 million, Cornacchia said, adding he has not even reached out to some long-time donors.

The plans don't stop there. Cornachhia wants to reach out to his other coaches and see what the university can do to help them. He also has a telephone call planned with MAAC Commissioner Rich Ensor about getting Saint Peter's a bigger share of money resulting from playing in four NCAA Tournament games.

The NCAA gives the money to the conference and then the league splits it among member institutions, following a set formula. Cornacchia wants a little extra for his school because it paid for ancillary staff members to attend the game, such as school communcations workers. He is not worried about being fairly compensated. The league might receive as much as $8 million from the NCAA, to be paid over six years, he said.

The bigger problem will be keeping up with Saint Peter's merchandise.

“We sold out everything and we’ve been repeatedly selling out things,” Cornacchia said. “We keep ordering more and more and more. And we just can’t keep up with the demand. It’s just been extraordinary.”

So was the run.