Same as it ever was; Boeheim, Syracuse rolling into Sweet 16 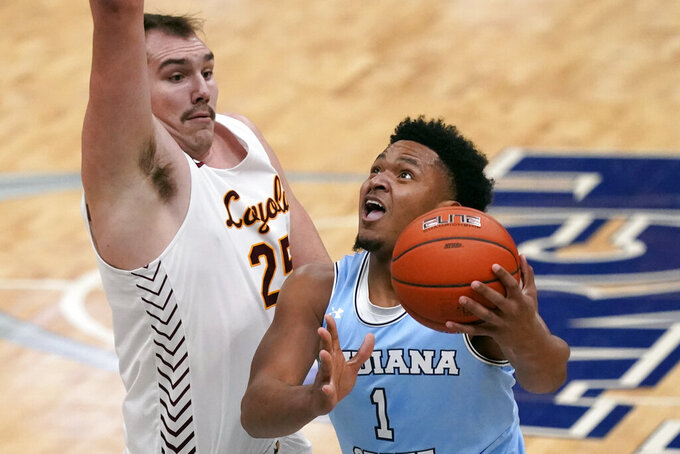 Indiana State's Tre Williams, right, heads to the basket as Loyola of Chicago's Cameron Krutwig (25) defends during the first half of an NCAA college basketball game in the semifinal round of the Missouri Valley Conference men's tournament Saturday, March 6, 2021, in St. Louis. (AP Photo/Jeff Roberson)

Jim Boeheim heard the noise. And he tuned it out. Buddy Boeheim, however, could not. Would not.

Scanning social media early in the season as Syracuse — the program the elder Boeheim has run for more than four decades — struggled to find its footing, the unflappable kid they call “Buddy Buckets” stared at his phone and shook his head.

“I saw a lot of stuff on Twitter talking about (Dad) and just crazy stuff, how he’s been not doing well the last 10 years,” Buddy Boeheim said. “Do you know how many people would dream about going to two Sweet 16s, two Final Fours and an Elite Eight? In 10 years, that’s pretty good. He’s never had a losing season, and he continues to do it.”

Buddy's actually shorting his pops a couple. The Orange have reached five Sweet 16s over the last decade — the last three as a double-digit seed — after holding off third-seeded West Virginia 75-72 on Sunday.

The latest trip to the regional semifinals — the 20th for the program during Boeheim's Hall of Fame run at the university — featured most of the hallmarks of the previous 19, particularly the 2-3 zone defense that looked highly beatable in January before morphing into a serious problem for opponents in March.

Syracuse will face second-seeded Houston on Saturday after the Cougars slipped by 10th-seeded Rutgers. Houston coach Kelvin Sampson initially declined to talk about the prospect of facing the Orange, saying he wanted to enjoy his team's gritty comeback.

Besides, what's there to scout? Syracuse is doing what it has done for most of the last four-plus decades. The Orange are long in the frontcourt — where 6-foot-10 Marek Dolezaj patrols the middle of the zone — and the younger Boeheim is channeling former Orange great and current assistant coach Gerry McNamara.

Boeheim has 55 points through two tournament games, including 22 in the second half against the Mountaineers following a brief pep talk from McNamara.

“At halftime, he came up to me and said, ‘Keep shooting. You’re the best shooter on the planet,' is what he tells me," Buddy Boeheim said. "And I said 'Yeah.'”

Syracuse's seeding is a result of middling regular seasons, the kind that forces it to spend most of January and February on the dreaded bubble. Funny how it very rarely pops. The only ones consistently unsurprised by what Syracuse is able to do each March are the coaches who have spent nearly a half-century trying to figure the Orange out, with minimal success this time of year.

“I think it took some time to understand what (Jim) was asking them to do,” West Virginia coach Bob Huggins said. “You don’t just roll out of bed and play 2-3 zone the way they do. He’s the best that’s ever coached the 2-3 zone, and they’re the best to ever play it. ... He did a terrific job.”

The kind that routinely silences the outside noise. The noise his son will probably learn to tune out too.

“All that stuff on the Internet, not one sentence on the Internet matters, not one,” Jim Boeheim said. “When my boss, the athletic director or the chancellor, says something to me, I listen to that. They have not. But as far as me worrying about what people out there who don’t support our program probably in any way, they probably don’t come to games or have season tickets, everybody’s entitled to their opinion, but I don’t listen to them.”

Maybe because he's too busy coaching his way to the Sweet 16. Again.

Three years ago, Loyola Chicago wrecked brackets on the way to the Final Four. The Ramblers had no March Madness pedigree to speak of save for a 1963 national championship won five years before coach Porter Moser was born.

Now, well, the Ramblers are much more than another plucky March underdog. The proof laid bare during a 71-58 dismantling of top-seeded Illinois on Sunday that not only sent the eighth-seeded Ramblers back to the regional semifinals for the second time in four years but turned Loyola back into the basketball king of its state.

Loyola will face either Oklahoma State or Oregon State in the Sweet 16 as a burgeoning power.

“I mean, yeah, it’s definitely a different story,” said senior Cameron Krutwig, who had 19 points and 12 rebounds. “We came into this tournament ranked like 17th in the country in the AP poll. We got an 8 seed. That’s just the hand we were dealt. We feel like we’re one of the best teams in the country, and I think we showed that these last two games.”

Sure looked like it. Loyola (26-4) never trailed against the Illini, the Big Ten Tournament champions. The Ramblers took care of the ball. They made open shots. Tough shots too, with Krutwig — one of two holdovers from the Final Four Team — putting on an old-school big man clinic.

That's why Moser summoned his players back onto the court in the giddy aftermath, ordering them to stand behind Krutwig to drink in the moment.

“You know, just thinking back where we came from 10 years ago, to moving up into the Missouri Valley and then the last six years," Moser said. “I kept on saying it, I go, ‘I just feel like this has a high ceiling, what you can do when you get a group of people believing.’”

A group growing larger by the day. If Moser needs to look for a blueprint, he need only look to the other side of the bracket. Gonzaga emerged from the Pacific Northwest around the turn of the millennium with their very own unique style.

Another potential step forward awaits next weekend. Loyola looks more than ready, even if Moser's been paying no attention to the bracket around his group.

“I’m not thinking strategically, ‘I hope this team wins, I hope this, I hope that,’” Moser said, later adding: “There’s reasons why teams win and why they lose and we’ve got to make those reasons happen the next round.”