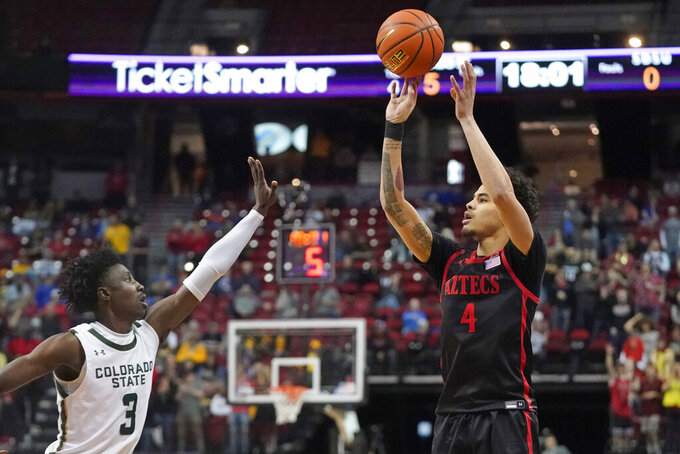 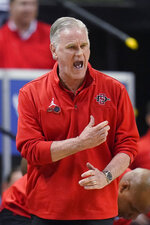 San Diego State (23-7) held off a late rally by the Rams, who erased a seven-point deficit with 1:23 left in the game to pull within two points twice.

Adam Seiko drained two free throws with 9.8 seconds for the Aztecs to make it a two-possession game and force the Rams to attempt an errant 3-pointer with time draining.

Seiko overcame a bleak 2-for-7 clip from the floor to score 10 points, including 5 of 8 from the free-throw line down the stretch.

All nine Aztecs who stepped on the floor scored for San Diego State, providing balance with five scoring at least eight points.

“I don’t know if (that) has happened in a while,” Aztecs coach Brian Dutcher said. “We got contribution from a deep bench. And that was important.”

The Rams, who have now lost eight of their last 10 against San Diego State, couldn’t get much more offensively, other than nine points from Chandler Jacobs, as six others scored three or fewer points.

“Tough loss, really hard-fought game,” Colorado State coach Niko Medved said. “I thought our guys battled the last 15 minutes. We made another run late, we just couldn’t get a stop. We made too many mistakes. Too many easy baskets in the paint. We let those guys get into a rhythm. We did a lot of good things tonight, we just didn’t do them for long periods of a time.”

“We just didn’t make the shots,” Stevens said. “Their stout defensively. I was trying to be aggressive.”

The Aztecs improved to 14-4 in the semifinal round of the event, and have won their last five semifinal games. San Diego State, which has won the Mountain West tournament a record six times will play for the tournament title for the eighth time in the last nine years.

Now on a 12-2 run heading into Saturday’s final, the Aztecs will be looking for a second straight revenge win. During its 14-game run, San Diego State’s only two losses came by one point on the road, at Colorado State and Boise State.

The Broncos swept the regular-season series against San Diego State, which improved to 4-2 against Top 25 teams.

Colorado State hit its first six shots of the game and used a 9-0 run over the first five minutes to open a 14-7 lead against the Aztecs, who shot just 28.6% (2 of 7) at that point. But following a timeout, San Diego State suffocated the Rams with little to no space, started denying the paint a little better, and hit seven straight shots to go on runs of 8-0, 13-1, and 17-5 to take a 24-19 lead.

After their red-hot start, the Rams missed 10 of their last 14 shots in the first half.

“One thing we try and do is make sure our defense is always on point, no matter if our offense is struggling,” Seiko said. “It’s a long game. It’s a game of runs. We always talk about that in the huddle.”

TOP OF THE MOUNTAIN

San Diego State’s 31 Mountain West Conference tournament wins since the 2008-09 season are the most in the country over that span, with Gonzaga sitting second with 30 wins in the West Coast Conference. Overall, the Aztecs are now 39-16 in the Mountain West tournament for a winning percentage of 70.9%. The 39 wins are the most by any team - current or former - in league history.

San Diego State improved to 21-1 when leading at the half this season, and is now 104-12 when holding a lead at halftime under coach Brian Dutcher.

Colorado State, meanwhile, was also a second-half team this season outscoring opponents by an average of 5.6 points per game in the second half this season. The Rams outscored San Diego State 32-28 over the final 20 minutes on Friday, but it wasn’t enough.