Sanogo, Martin lead No. 24 UConn over No. 18 Marquette 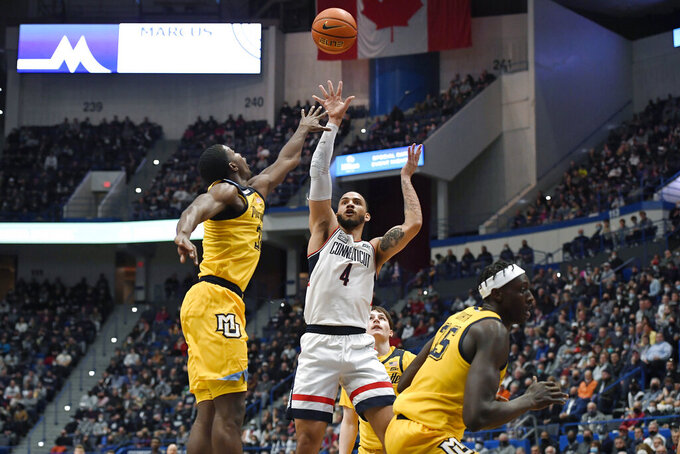 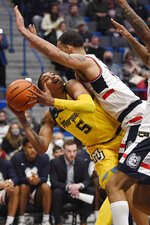 HARTFORD, Conn. (AP) — UConn had a players' meeting after dropping back-to-back games to Creighton and Villanova to talk about getting back its identity as an aggressive, passionate team that outmuscles its opponents.

The No. 24 Huskies showed off that identity on Tuesday night, snapping a two-game losing streak with an 80-72 win over No. 18 Marquette.

Adama Sanogo scored 24 points and grabbed 15 rebounds and Tyrese Martin added 18 points and 15 boards for the Huskies (16-6, 7-4 Big East), who swept the season series with the Golden Eagles. It was Sanogo's fifth double-double this season and Martin's third.

“We haven't been that team the last couple games,” Martin said. “So, we definitely embraced what coach was saying about that and wanted to come out as that team today and I feel like we did that from the start.”

Freshman Olivier-Maxence Prosper scored 18 points while Greg Elliott and Justin Lewis each had 17 for Marquette (16-8, 8-5). The Golden Eagles have dropped two out of their last three after winning seven straight.

UConn outrebounded Marquette 46-27, including 14-10 on the offensive end. The Huskies had 20 second-chance points to just 11 for the Golden Eagles.

“Tyrese and Adama played like first-team, all-league players,” UConn coach Dan Hurley said. “Adama played like a Big East player-of-the-year guy. That’s how you play at the top of the league, where you have multiple all-conference-level guys. So, we need those guys to show up night in and night out.”

Marquette trailed by by as many as 14 points in the first half and by 10 points at halftime but began chipping away in the second half.

A 3-pointer from Elliott cut the UConn lead to 53-50 and free throws from Oso Ighodaro cut the deficit to a single point, but Marquette never took the lead.

The Huskies used a 10-0 run to stretch the lead back out.

Marquette made a final push, cutting the deficit to 78-72 on a 3-pointer by Lewis with 27 seconds left before Andre Jackson finished the scoring from the foul line.

Sanogo had 14 of his points in the first half as UConn used a 17-3 run to build a 38-24 lead. That was sparked when freshman Jordan Hawkins deflected a Justin Lewis shot and hit a 3-pointer on the other end, earning a chest bump from his coach.

A short hook shot in the lane from Sanogo capped the run as the Huskies shot 59% from the floor in the first half.

Elliott scored 10 points late in the half to keep Marquette within striking distance. But a Hawkins jumper just before the halftime buzzer sent UConn into the break up 46-36.

Marquette: The Golden Eagles had won eight of its previous nine, with five of those wins over ranked teams. The only loss during that stretch came at first-place Providence by two points on Jan. 30.

UConn: UConn is 2-2 this season when playing against a top 25 program, but had not beaten a ranked opponent since its win over Auburn in the Bahamas on Nov. 24. The losses came at Seton Hall and Villanova.

Smart said he was impressed by UConn's physicality and ability to take control of what he said was a “grown man's game.”

“We always talk about playing with violence," he said. "They were the more violent team today.”

The fans helped a nervous police detective through the national anthem by singing with her after she forgot the words and had to stop. They also gave her a huge ovation when she hit the big notes at the end.

“That was a cool moment,” Hurley said. “I think it energized the crowd a little bit.”

Marquette: Travels to Indianapolis to take on Butler on Saturday.

UConn: The Huskies play their third straight game against a ranked opponent, visiting No. 25 Xavier on Friday.