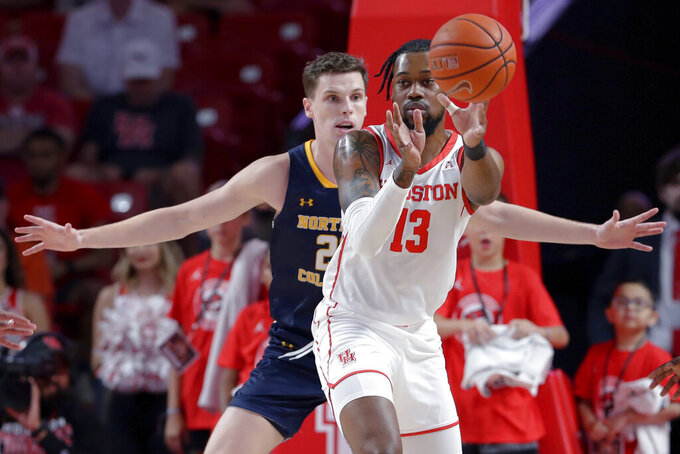 Sasser, a preseason All-American, scored 11 points in the first half. He finished 7 of 14 from the field and made 4 of 8 3-pointers. The senior guard missed the second half of last season and all of Houston’s run to the Elite Eight with a toe injury.

“It was exciting, fun, a lot of emotions really,” Sasser said. “It’s been almost 11 months since I have been out there with this group of guys. Being out there with them tonight, it was real fun and exciting to see all the hard work we’ve been putting in since June pay off.”

“It’s been a wonderful journey,” Sampson said. “I have so many people to thank.”

Emanuel Sharp scored 11 points, Jamal Shead had nine points and nine assists, and Jarace Walker had eight points and 12 rebounds for Houston. The Cougars shot 44% and were 11 of 29 on 3-pointers.

The Cougars, who started the season with their highest ranking since the 1967-68 team began at No. 2, have won 14 straight openers.

“For us, we’re still a developing team figuring out how to score,” Northern Colorado coach Steve Smiley said. “When you look at the box score, guys that need to score starting with Daylen ... he didn’t make a shot tonight.”

Northern Colorado: The Bears, who were picked to finish second in the Big Sky, held their own against Houston for much of the first half on the defensive end but struggled to do much offensively. The Cougars’ size and athleticism were too much for Bears.

“I think there’s a lot more good than bad that came out of the game,” Smiley said. “The final score, the last three, four minutes where it just breaks open, kind of disguises that we definitely battled. We got a long ways to go. We’re nowhere near being able to compete at that level right now, but I do think that we showed a lot of good things.”

Houston: The Cougars were sluggish to start and had issues breaking Northern Colorado’s zone for most of the first half. Rebounding and defense continue to be staples for the Cougars, who outrebounded the Bears 43-31 and forced 23 turnovers, which they converted into 27 points.

“We always have a game plan, defensive strategy, scheme,” Sampson said. “We just always hang our hat on defense here. There’s three things that allowed us to be successful year in, year out regardless of what team it is: We defend, we rebound and we take care of the ball.”

Sampson, the 33rd Division I coach to reach 700 victories, has a 700-340 overall record and is 200-70 in nine seasons with Houston. He was presented a game ball to commemorate the win and a video of former players congratulating him was shown.

Houston: Faces St. Joseph’s in Annapolis, Maryland, on Friday as part of the Veteran’s Classic.