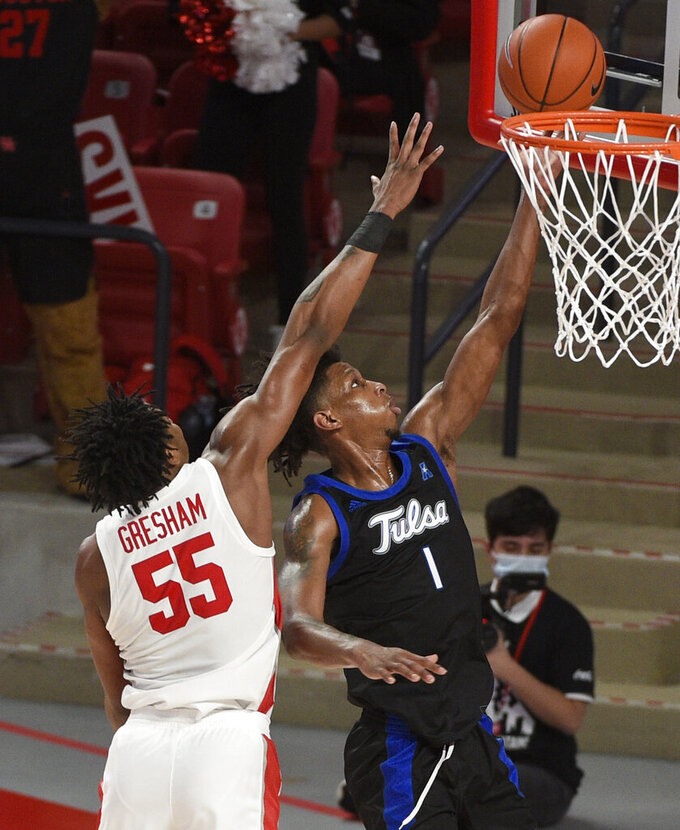 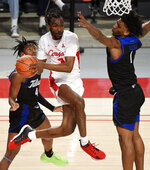 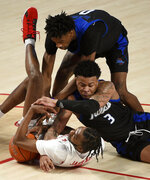 HOUSTON (AP) — Marcus Sasser scored 26 points, Quentin Grimes added 18 points and seven rebounds and No. 8 Houston avenged its only loss with an 86-59 win over Tulsa on Wednesday night.

Sasser, who scored 18 points in the first half, finished 8 of 15 from the field, including 6 of 12 on 3-pointers. Tramon Mark had 11 points and six rebounds for the Cougars.

“The more you miss, we are going to send four to the glass,” Houston forward J’Wan Roberts said. “I think that wears teams out when we get two, three, four possessions back-to-back. The more we crash (the glass) and do what we have to do, we are going to get a big lead every time.”

Houston coach Kelvin Sampson said the Cougars made a concerted effort to work this week on guards grabbing the defensive rebound to speed up the offensive pace.

“When you work on something and you emphasize it, it just makes you feel great when you can carry it over to the game,” Sampson said. “Our possessions have been down lately, and we made a concerted effort to play faster.”

The Cougars won their fifth straight since falling to the Golden Hurricane 65-64 in Tulsa on Dec. 29. Houston has not trailed in 114 minutes, dating back to the first half against Tulane on Jan. 9, a span of nearly three games.

“As time goes by, you should be getting better,” Sampson said. “During the basketball season, your team is a lot like an elevator. You’re either going up or you’re going down, but you’re never standing still. One of the things that our teams have been known for forever really is we get better as the season goes on.”

“Tough, tough night for us,” Tulsa coach Frank Haith said. “That first couple minutes of the ballgame, they set the tone. They were way more tougher, physical, played faster and it showed. We just didn’t compete like you needed to compete against a team like this on the road.”

Houston used a 23-3 run over an eight-minute stretch of the first half to open up a 29-9 lead, punctuated by a 3-pointer by Sasser, who had 13 points in the stretch.

The Cougars ended the first half on a 7-0 run, capped by a dunk by Brison Gresham and took a 45-19 lead into halftime.

“They were very aggressive,” Haith said. “They scored in transition. They kept us off the glass. … They kicked our butts.”

Houston: Sasser’s 26 points were the most a player has scored against Tulsa this season. Houston forced Tulsa into 18 turnovers, which the Cougars turned into 26 points. Houston committed 15 turnovers. The Cougars had a 32-20 advantage in points in the paint.

Houston: Travels to Temple on Saturday. The Cougars’ originally scheduled game against Cincinnati on Saturday was postponed due to positive COVID-19 cases and contact tracing at Cincinnati.