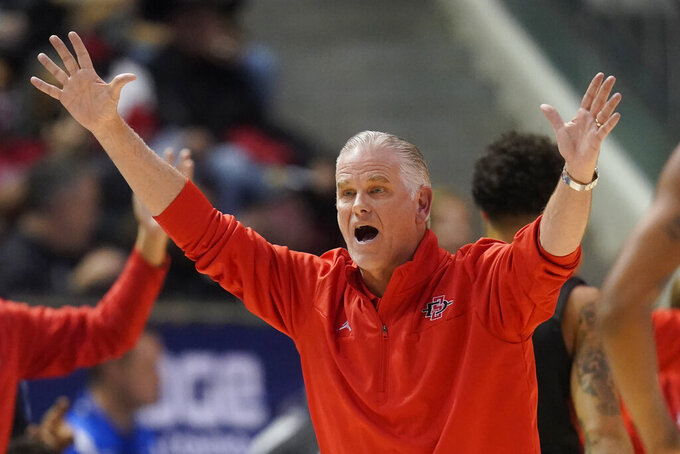 FILE - San Diego State coach Brian Dutcher reacts after a call during the first half of the team's NCAA college basketball game against BYU on Nov. 12, 2021, in Provo, Utah. (AP Photo/Rick Bowmer, File)

SAN DIEGO (AP) — One of San Diego State’s toughest games this season won’t count and nobody will see it.

As a prelude to a season with even higher expectations than normal, the No. 19 Aztecs will host No. 8 UCLA in a closed scrimmage Sunday at Viejas Arena. They’ll play a regulation 40-minute game with referees and a stats crew. The only thing missing will be screaming fans.

“It’s good for both of us, who each have very good programs,” said SDSU coach Brian Dutcher, entering his sixth season with his deepest, most-talented team. “It’s the kind of test you want in the early season to get yourself ready for regular-season play.”

It’ll be up to the schools to decide whether to release any results after the scrimmage.

Dutcher thinks the Bruins scouted the Aztecs before a similar scrimmage last season in Westwood, and he plans to do the same this year with his roster of four returning starters and some highly regarded transfers.

“We’ll look at what they ran last year because I want to see how we do when we’re prepared for a game,” Dutcher said. “We’re right into the fire with this year’s schedule: BYU, Stanford, Fullerton and Maui. We can’t ease in, so we’ll prep for them this time.”

Darrion Trammell, a transfer from Seattle, and returning starter Lamont Butler will test themselves against UCLA guard Tyger Campbell. Jaedon LeDee, a 6-foot-9 transfer from TCU, will see what he can do against UCLA’s big men in an empty arena where the squeaking of sneakers on the floor and shouts of the players will be the only noise.

SDSU was 23-9 last year, losing to Boise State in the Mountain West tournament championship game and then losing in overtime to Creighton in the NCAA Tournament after leading by nine points with 2 ½ minutes left in regulation.

“If we get any coaching and a little officiating, we should win a lot of games,” Dutcher cracked. “We’ve got a lot of talent, now we have to put it together. With our roster, it’s a player’s dilemma and a coach’s delight. We have a lot of players. I’m going to have a hard time finding minutes for everybody. But these guys are wired the right way. They’re wired to win.

“We should be very dangerous this year.”

The Aztecs return four starters from last year: senior forwards Nathan Mensah and Keshad Johnson, senior guard Matt Bradley and Butler, a junior guard. Bradley, Mensah and Johnson started all 32 games last year, while Butler started 25 times in 27 games. Bradley was the leading scorer at 16.9 points and Mensah, the MWC Defensive Player of the Year, was the leading rebounder at 6.9.

Trammell transferred from Seattle University, where he scored 1,010 points in two seasons. Micah Parish transferred from Oakland. LeDee, a physical 6-9, 240 pounds, is eligible after redshirting last year following his transfer from TCU.

The Aztecs were picked as the overwhelming favorites to win the Mountain West in the annual media poll, getting 16 of 20 first-place votes. The other four first-place votes went to Wyoming. Trammell was named the preseason Newcomer of the Year while Bradley was named to the all-league team.

The Aztecs open with home games against Cal State Fullerton on Nov. 7 and former league rival BYU on Nov. 11 before traveling to Stanford on Nov. 15. They face Ohio State in the Maui Invitational on Nov. 21. The winner will face either Arizona or Cincinnati. The other side of the bracket includes Texas Tech, Creighton, Louisville and Arkansas. The Aztecs will also play Saint Mary’s in Phoenix on Dec. 10.

“Obviously we think we’re going to be pretty good so we’ve challenged ourselves with maybe one of the hardest schedules we’ve ever played here,” Dutcher said. “It’s murderer’s row, but that’s what we’ve chosen to play. No one’s forced us to play that schedule. It’s what we want to do and we’re excited by that challenge."