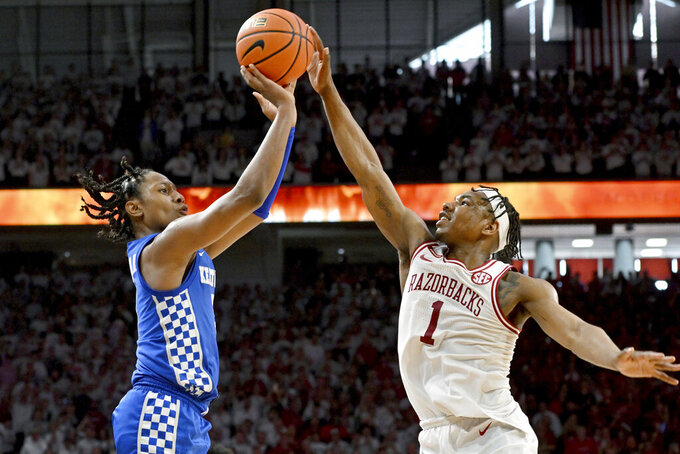 A look at action around the Southeastern Conference on the final weekend of the regular season:

Auburn (26-4, 14-3 SEC) can clinch the regular season title outright with a win over South Carolina (18-11, 9-8) at Auburn Arena. Three other teams enter Saturday vying for a share of the championship — and the No. 1 SEC Tournament seed — with 13-4 league marks: No. 7 Kentucky (24-6), No. 14 Arkansas (24-6) and No. 13 Tennessee (22-7). All three won their mid-week games. The Tigers control their own fate. If they beat the Gamecocks, who have won five of their last six games, they win their fourth regular season title outright. Auburn won the first meeting 81-66 in Columbia on Jan. 4. The Razorkbacks and Volunteers meet in an early game so only one will still be in contention when the Auburn-South Carolina game ends. If three teams are tied, the first tiebreaker for the top seed in Tampa, Florida, will be the best winning percentage among the deadlocked trio. Arkansas beat both Auburn and Kentucky and could make a clean sweep with a second win over the Vols. Tennessee and Kentucky split their two meetings, while the Vols beat Auburn. The Tigers topped the Wildcats.

Arkansas star JD Notae still made a big impact even when he wasn't scoring a bunch. Notae hit two free throws with 8 seconds left to lift the Razorbacks to a 77-76 win over LSU. The 6-foot-2, 190-pounder had 12 points, seven rebounds and five assists. That followed a 30-point, eight-assist game against Kentucky. Notae is second in the league in scoring, averaging 18.8 points a game. He's also averaging 4.4 rebounds and 3.6 assists.

Oscar Tshiebwe is the first Kentucky player with 12 consecutive double-doubles since Dan Issel in the 1969-70 season. Tshiebwe's streak of 17 games with double-digit rebounds is the longest for a major college player since Wake Forest’s Tim Duncan also did it 17 times in a row during the 1996-97 season. ... Mississippi State has missed 32 of 33 attempts from long range the past three games, including all 13 3-point tries against Auburn. ...... Auburn guard K.D. Johnson scored 12 points in overtime to lift the Tigers to an 81-68 win over Mississippi State. He had two points on 1-of-5 shooting in regulation. ... Auburn is seeking its first undefeated season at home since going 15-0 in 1998-99. Kentucky went 18-0 at Rupp Arena, its sixth unbeaten home finish under coach John Calipari and first since 2015-16. ... Mississippi is now 2-56 all-time in Lexington, Kentucky. Tennessee snapped a six-game losing streak in games at Georgia.

No. 1 South Carolina is gunning for its seventh SEC Tournament title since 2015, a streak only interrupted by Mississippi State in 2019. The top four seeds opened play on Friday after receiving double byes. Other contenders coming into Nashville included No. 6 LSU and No. 18 Tennessee. The Gamecocks rode a 15-game winning streak into the tournament and are led by Aliyah Boston, Zia Cooke and Destanni Henderson.