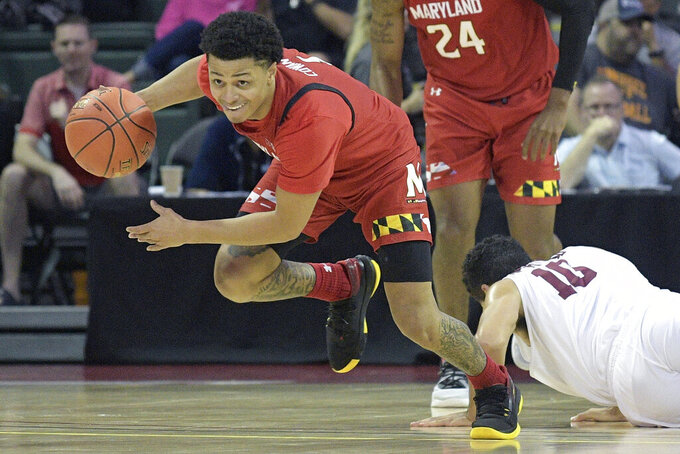 LAKE BUENA VISTA, Fla. (AP) — No. 5 Maryland is answering the challenge against stronger competition in the Orlando Invitational.

Coach Mark Turgeon’s just wondering what it’ll take to get Terrapins (7-0) going a little earlier in games, regardless of who they’re playing.

“I think we've beaten two NCAA tournament-type teams down here so far, and we get to play for a championship on Sunday,” Turgeon said after Friday’s 80-73 victory over Harvard in the semifinals of the eight-team tournament at Disney World.

“I’m disappointed in myself that I can't get our team to play better at the start,” the coach added. “I don't what know it is. If I knew what it was, I'd have it corrected.”

Anthony Cowan Jr. scored 17 of his 20 points in the second half, and the persistent Terps gradually overcame another slow start to begin a season with seven straight wins for the first time under Turgeon.

Cowan followed up on a 30-point performance in the previous day’s come-from-behind win over Temple with 10 points and an assist during a 12-4 burst that sparked a game-closing surge for the Terps, who also got the job done defensively by holding Harvard (5-3) without a field goal for a 6-minute stretch of the second half while Maryland was taking control.

Jalen Smith had 15 points and 10 rebounds and Aaron Wiggins, Darryl Morsell and Eric Ayala scored 13 apiece for the Terps, who will play Marquette for the championship.

“I thought (Thursday) we really had energy. Today we had nothing,” Turgeon said. “We’re a rah-rah team in the dressing room, a rah-rah team when we’re stretching. I thought we were ready. We just didn’t share the ball enough. I just want our guys to play a little more unselfishly at the start and I think we’ll be a better team.”

Bryce Aiken led Harvard with 30 points, but the Crimson missed 18 of 26 attempts from behind the 3-point arc and didn’t have enough muscle or firepower to hold off the Terps after leading by as many as 11 in the opening half. Noah Kirkwood finished with 12 points and Robert Baker had 11.

“Bryce can score with the best of them,” Harvard coach Tommy Amaker said. “He had a pretty efficient offensive game, but he can be better than that, certainly in other areas of quarterbacking our team and leading our team.”

Amaker was impressed with Maryland, which — despite slow starts being a recurring theme — won its first five games by no fewer than 18 points.

“The key word for me, and I think all good teams have this, is balance,” Amaker said. “I think they have a lot of pieces to the puzzle.”

Maryland: The Terps fell behind 9-0 in the opening minutes and trailed 35-31 at halftime. They also overcame a slow start against Temple on Thursday, but found a way to win despite not shooting well from the line. In addition to turning the ball over 16 times, the Terps made just 25 of 40 free throws.

Harvard: The Crimson would have led by more at halftime if they hadn’t gone 1 of 10 on 3-point attempts. After going 22 for 22 from the foul line in beating Texas A&M in the first round, Harvard only shot 17 free throws against Maryland, making 10.