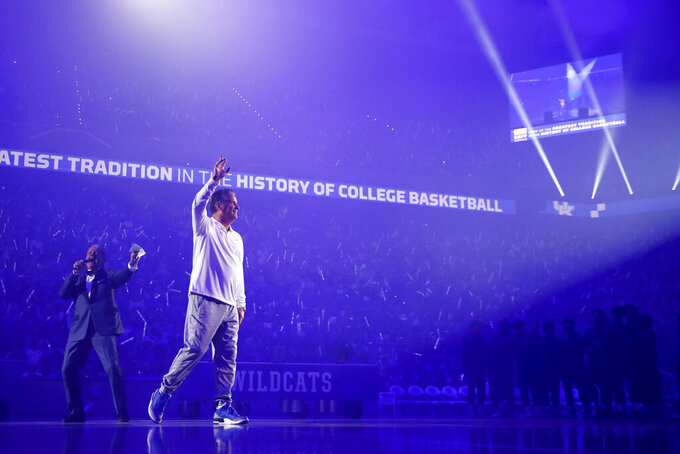 LEXINGTON, Ky. (AP) — John Calipari appreciates discussing the players who returned to Kentucky instead of focusing on who left.

That's understandable considering the second-ranked Wildcats have experience in the backcourt and inside, which helps offset their annual roster changeover.

Four regulars, including starting point guard Ashton Hagans, return from a 30-7 team (15-3 Southeastern Conference) that lost in overtime to SEC rival Auburn in the Elite Eight. Despite the change of pace for Calipari's program to be discussing veterans, the coach warns that putting things together might take more work this season.

But Calipari is optimistic about the Wildcats' long-term prospects of pursuing a ninth national championship.

"Part of it is going to be in the games (where) we've got to get them to understand we're going to have to take it up a notch. The main thing for me will be how do we rebound and how tough are we physically?"

Having Hagans and Immanuel Quickley in the backcourt and Nick Richards and EJ Montgomery in the middle will help answer some of those questions.

Hagans' return after averaging 7.8 points and 4.3 assists per game last season is significant. He announced he would be back for a second season before teammates PJ Washington, Tyler Herro and Keldon Johnson became first-round NBA draft picks. Hagans hopes to build on a rookie year that established him as one of the nation's top on-ball defenders.

Calipari has recruited backcourt help in freshmen Tyrese Maxey, Johnny Juzang and Dontaie Allen, who's recovering from knee and shoulder injuries. Hagans is prepared to lead Kentucky wherever he's needed and is encouraged by what he has around him.

"You've just got to just show (Calipari) that you're ready, that you're out here fighting and going to compete against everybody," said Hagans, the SEC's co-defensive Player of the year.

"We've got four guys back that have a leadership role on this team, and that's what we're going to need to be at our best."

Some other things to look for during the Kentucky's 2019-20 season:

The return of Richards, a 6-11 junior, and 6-10 Montgomery provide post experience, but Kentucky's height drops off drastically with 6-9 grad transfer Nick Sestina the next tallest player. Richards and Montgomery appear ready for more minutes but they'll be challenged to avoid foul trouble.

The frontcourt newcomers include 6-7 Keion Brooks and 6-6 Kahlil Whitney. Calipari said smaller lineups could frequently result to give his post men a break and mitigate foul issues. The Wildcats' upside is length throughout the roster, which could help with rebounding and spreading opponents out defensively.

"I feel the best I've ever felt, and I've played basketball for four years," he said.

The Wildcats return just 27% of their scoring from last season, led by Hagans and Quickley (5.2 points per game). Tyrese Maxey and Johnny Juzang are projected as the likely shooters, though Hagans and Quickley seem primed to take more shots this season. Sestina has shown long range potential.

Quickley's offseason improvement has drawn praise from Calipari. The sophomore not only looks more muscular than last season, but is showing aggression. Quickley will likely play off the ball but handles the ball well enough to be able to spell Hagans at the point. "I've been working on my body," he said, "changing a lot of parts of my game, just working to be the all-around best player I can be. My mindset has changed."

Kentucky again opens the season with a big test on Nov. 5 against top-ranked Michigan State at the Champions Classic in New York. December features a steady docket of Power Five opponents including consecutive matchups against Utah and Ohio State in Las Vegas and a home showdown against rival and No. 5 Louisville before beginning SEC play against Missouri. The Wildcats visit national runner-up Texas Tech in the Big 12/SEC Challenge on Jan. 25.