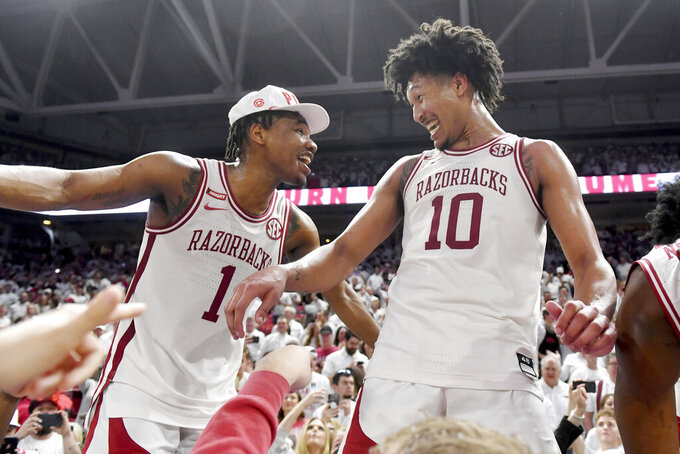 JD Notae was the best player inside Arkansas' Bud Walton Arena on Tuesday night, getting the better of Auburn’s potential lottery picks.

“We all know JD can score probably 100 points in a game if he really could get up that many shots,” teammate Jaylin Williams said. “JD can score.”

Notae can do it all, really, and will likely get invited to an NBA training camp this summer. The fifth-year senior who started his college career at Jacksonville is now the league’s leading scorer at 19.1 points a game and tops the conference with 2.4 steals a game. It’s a significant jump from being voted the Southeastern Conference’s Sixth Man of the Year last season.

“Just being aggressive, staying true to who I am and not being afraid to go down there with the big dogs,” said Notae, who has scored in double figures in every game this season.

STRENGTHS: Notae as seen it all. At 23 years old, he’s already played in 115 games and could return for another year under NCAA rules regarding the impact of COVID-19. His experience has him making better decisions with the ball and has his assist-to-turnover ratio at an all-time high.

“Clutch player,” Arkansas coach Eric Musselman said. “He commands so much attention from the defense.”

WEAKNESSES: Even though Notae leads the Razorbacks (19-5, 8-3 SEC) with 51 3-pointers, he’s only shooting 31% from behind the arc. He has been more accurate at times – he shot 40% from long range as a freshman – but it’s a number that would need to improve for him to make an impact at the next level.

DRAFT PROJECTION: Notae is unlikely to be selected in the NBA’s two-round draft in July because of his size and age, but he should get a chance to show what he can do in a camp based on how polished he is on both ends of the floor.

F COLIN CASTLETON, FLORIDA: The 6-11 senior is back after missing six games with a left shoulder injury – he embraced a role as chief cheerleader while recovering – and gives the Gators (15-8, 5-5) hope of making a fifth consecutive NCAA Tournament. Castleton had 17 points and seven rebounds in his return Saturday, helping Florida beat Mississippi in overtime and win its third straight. He leads the Gators in scoring (15.5), rebounding (8.9) and blocked shots (47).

F TARI EASON, LSU: The 6-8 sophomore who transferred from Cincinnati is flourishing with the Tigers. He led the way in a much-needed victory at Texas A&M on Tuesday night, finishing with 25 points and 12 rebounds for his sixth double-double of the season. LSU had dropped three in a row and six of seven. Eason has scored in double figures in eight consecutive games.

G SCOTTY PIPPEN JR., VANDERBILT: The 21-year-old son of Chicago Bulls great Scottie Pippen opened eyes with a 33-point, six-rebound, five-assist game against Kentucky last week and has been instrumental in the Commodores winning three of four. He’s got a knack for drawing fouls. He leads the SEC and ranks fifth nationally with 158 free-throw attempts. He ranks second in the league in scoring, averaging 18.7 points.