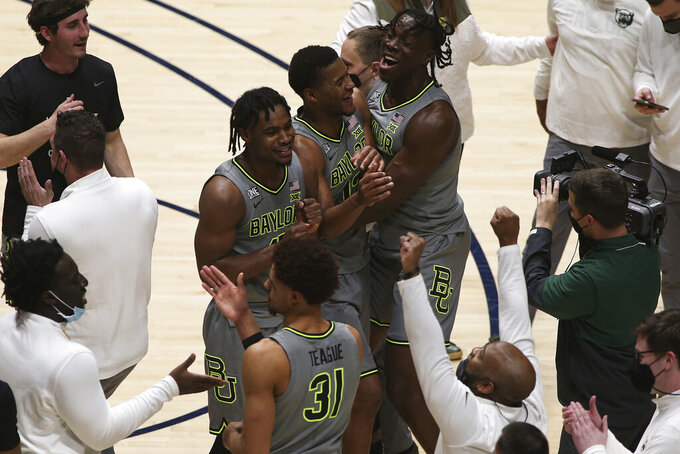 The seedings for the Big 12 Tournament are at stake heading into the final weekend of regular-season play. Baylor already has secured its first conference title since 1950 and the No. 1 seed, but everything is a jumble after the Bears. That also means there is no clear-cut game of the week, rather a whole slew of games that will determine who will earn the crucial No. 2 seed when the tournament begins next week in Kansas City, Missouri. Kansas has finished its league schedule and was tied with West Virginia with .667 winning percentages heading into Thursday night's games, where the Jayhawks played UTEP and the Mountaineers played TCU. Oklahoma State had a .625 winning percentage but could match Kansas by finishing up the regular season with wins at Baylor and West Virginia.

The games Thursday night had Oklahoma State at Baylor, TCU at West Virginia, Iowa State and Texas Tech, Texas at Oklahoma and Kansas playing a late nonconference addition against the Miners. The Cowboys and Mountaineers play Saturday, when Iowa State visits Kansas State, and regular season wraps up Sunday when Texas Tech visits Baylor and Texas heads to TCU.

Oklahoma State forward Cade Cunningham went through some midseason growing pains, struggling to corral turnovers. But he's been on a tear the last few weeks, making him a clear front-runner for the No. 1 overall pick in the NBA draft. Cunningham poured in 40 points with 11 rebounds and three steals in a win over Oklahoma, then deferred to his teammates and scored (just) 15 points in another win over the Sooners two days later. He's averaging 19.5 points and and 6.3 rebounds this season.

Heading into Thursday night, Kansas leads the nation with seven wins against Top 25 foes. Baylor, Oklahoma, Oklahoma State and West Virginia are tied for fourth nationally with five. ... Seven of the league's 10 teams are ranked in the Top 25 this week. ... Iowa State's Jalen Coleman-Lands had 22 points against Texas for his second straight 20-plus game. ... Kansas beat the Bears last weekend for its 38th straight win on Senior Day. ... Oklahoma State was 8-4 heading into Thursday night against Quad 1 opponents. The eight wins were tied with Michigan and Illinois for first nationally. ... TCU was 12-11 before its game against West Virginia, but all three losses have come against teams ranked in the Top 25. ... The Longhorns' Kai Jones had 17 points off the bench to lead four Texas players in double-figures scoring in their win over Iowa State. ... West Virginia's Taz Sherman had 26 points off the bench in its overtime loss to Baylor.

Baylor clinched its 11th straight outright Big 12 title Monday night when it beat Texas. That is tied for the fifth-longest streak in Division I history. ... Oklahoma State's Taylor Robertson scored a season-high 28 points against TCU. She also had 16 points in an overtime win at Texas. ... Iowa State freshman Lexi Donarski had 18 points to help the Cyclones beat West Virginia for its season win over a ranked team. ... Rachel Ranke became the third player in Kansas State history to reach 1,000 points, 300 rebounds, 200 3-pointers and 100 steals in her career. ... Texas Tech’s Naje Murray scored a season-high 26 points against Kansas State. She hit eight 3-pointers and added five rebounds and four assists. ... West Virginia’s Esmery Martinez had 24 rebounds at Kansas, the most by a Mountaineers player since 2015.