Self bests Pitino in 1st meeting, No. 4 Kansas tops Iona 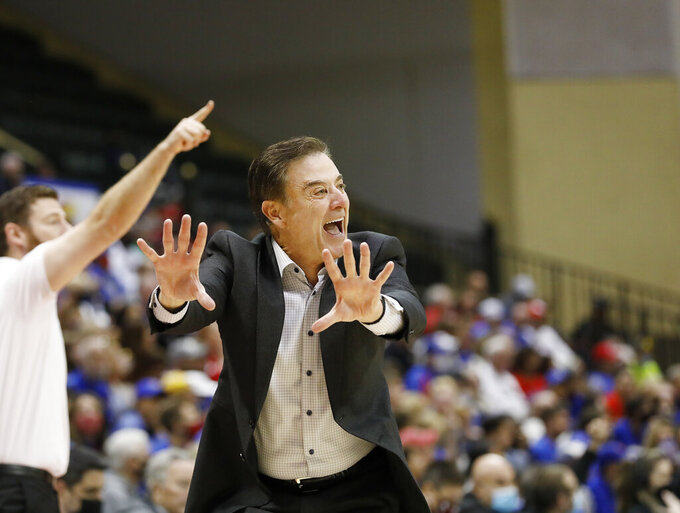 David McCormack scored 13 points for Kansas (5-1). The Jayhawks were was coming off their first loss of the season, 74-73 to Dayton on a buzzer-beater in an ESPN Events Invitational semifinal on Friday.

Beating Pitino's Iona team, which opened the tournament with a win over No. 10 Alabama, was enough to salvage third place in the tournament for Self's Jayhawks.

“Now that I've faced Kansas, I'm glad we didn't play them in all those years,” Pitino said. “I've always admired him. I've always thought he's one of the best coaches in the game. What I admire most is, whether it's his fast break, his offensive sets, his rebounding, he doesn't have a weakness as a coach.”

When asked what he had to say to Pitino, a smiling Self said: “Good game and he said good game, too.”

“The way that his teams always competed on a very national high level and doing it without five-star recruits compared to the way some other people do it means they develop and they get the most out their guys,” Self said.

Iona (6-2) got 14 points apiece from Tyson Jolly and Ryan Myers. The Gaels also lost for the first time Friday, dropping a 72-65 decision to Belmont.

Both teams had five players score in double figures.

Unlike its first two games in the invitational, Kansas built a double-digit first-half advantage and held onto it, taking a 46-31 lead at the break behind 13 points from Braun.

“We didn't accomplish the goal,” Braun said of the Jayhawks' tournament performance. “All of us weren't pleased. We have stuff to improve on. We're going to do it.”

Myers, who came off the bench, had a pair of 3-pointers that helped Iona get within 80-68 with 5 minutes remaining, but the Gaels got no closer.

Iona had a pair of 4 1/2-minute scoring droughts, and turned the ball over 10 times during the opening 20 minutes.

Iona: The Gaels look like a squad that could reach the NCAA Tournament for the second straight season with Pitino at the helm.

“We'd like to get to the point where we have the same type of talent Kansas has,” Pitino said.

Iona: At Marist on Wednesday night.