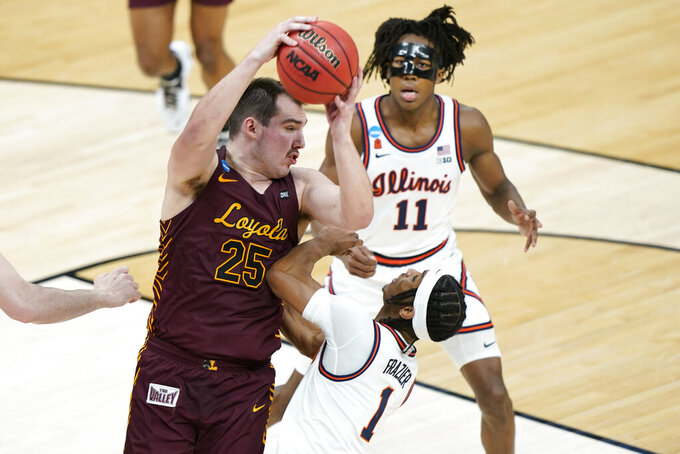 Loyola of Chicago's Cameron Krutwig (25) grabs a rebound above Illinois' Trent Frazier (1) during the first half of a college basketball game in the second round of the NCAA tournament at Bankers Life Fieldhouse in Indianapolis Sunday, March 21, 2021. (AP Photo/Mark Humphrey)

Michigan's second-round game against LSU was intense from the start. Up and down the court the teams went, trading runs and momentum swings with the season on the line.

One player for the Wolverines seemed calm and steady — guard Eli Brooks.

“I think just all the amount of reps we get in practice and being a senior, you see a lot of things through your time in college,” Brooks said. “Just being able to be on the court and have those experiences when I was younger I think really helped me out a lot.”

College basketball long ago reached the point when a team could make a deep run in the NCAA Tournament while relying on freshmen or sophomores. In fact, Brooks' coach — Fab Five standout Juwan Howard — played a big role in setting that trend. But under the pressure of a win-or-go-home scenario, experience can still be an asset. Brooks had 21 points, seven assists and only one turnover in Michigan's 86-78 win Monday night. Chaundee Brown Jr., another senior for the Wolverines, scored 21 off the bench.

Elsewhere in this tournament, seniors like Gonzaga's Corey Kispert, Loyola Chicago's Cameron Krutwig and Oregon State's Ethan Thompson have been crucial in leading their teams to the Sweet 16. Baylor's whole starting lineup is juniors and seniors. Oregon's three senior starters — Chris Duarte, LJ Figueroa and Eugene Omoruyi — combined for 61 points in a second-round win over Iowa.

Loyola coach Porter Moser, who started four seniors in his team's second-round victory over top-seeded Illinois, mentioned that type of experience when discussing the factors that can create more parity in the sport.

“I think there's just kids getting developed and being old," Moser said. "Having programs that have kids in the program — two, three, four years — that they develop and learn a system, get better.”

That kind of continuity is not a given at Michigan, where top players often have NBA potential and might leave early for the draft. Isaiah Livers and Brooks have been with the Wolverines for four years, and this season Howard added some experience via the transfer route. Grad transfer Mike Smith has taken over at point guard, and Brown arrived at Michigan after three seasons at Wake Forest.

Production from players like Brown and Brooks became even more important after Livers went down with a foot injury. He hasn't played in this tournament.

“I think we showed what we thought in the room that we have,” Brooks said. “Next man up, that’s our mentality. We knew we had enough in the locker room to get to the Sweet 16. Just keep buying in.”

In Oregon's 95-80 win over Iowa, a key stretch came near the end of the first half. At one point, coach Dana Altman had Duarte, Figueroa and Omoruyi in the game together, even though each had two fouls.

“I told them we’ve got to be really careful here, but we can’t get behind these guys. We can’t be chasing them,” Altman said. “I stressed to them when I put them back in, ‘Fellas, I trust you here, can’t have stupid fouls, got to pull back, no stupid reaches, let’s finish the half, let’s get in the half with all three of you.’”

Oregon was the team that closed the half strong, taking a 56-46 lead. Duarte, Figueroa and Omoruyi made it through the rest of the game without another foul.

Those players rewarded Altman's trust, and Loyola's seniors have certainly stepped up for Moser. Krutwig and guard Lucas Williamson both averaged over 20 minutes a game as freshmen in 2017-18, when the Ramblers went to the Final Four. Now they need two more wins to repeat that run.

"Having older guys that have been there — sometimes when a coach is talking about it, it’s a little more impressive and resonates more when their peers say it,” Moser said. “The similarities are it’s just a group of guys believing and playing for each other. They listen, they lock in, they execute, they defend, and those are similarities.”