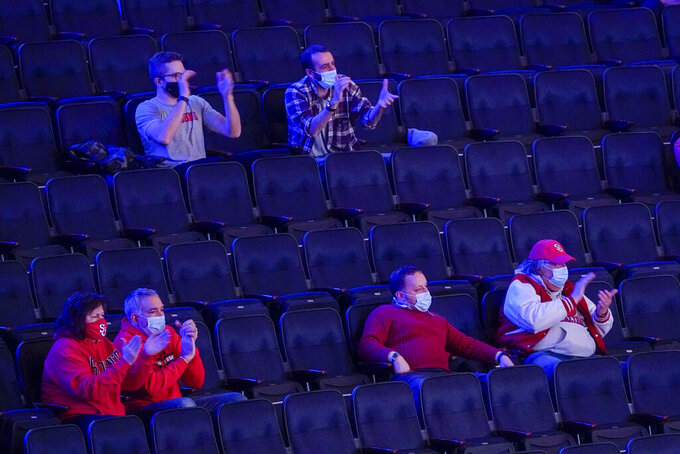 St. John's fans cheer on during the first half of an NCAA college basketball game against Seton Hall in the quarterfinals of the Big East conference tournament, Thursday, March 11, 2021, in New York. (AP Photo/Mary Altaffer) 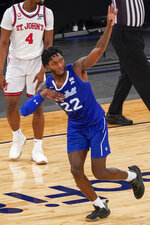 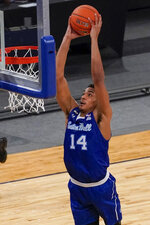 NEW YORK (AP) — With its NCAA Tournament hopes likely on the line, Seton Hall dug in and took a huge step toward sticking around in March.

Jared Rhoden hit six free throws in overtime to finish with 19 points and a career-high 16 rebounds, and the Pirates got past St. John's 77-69 in the Big East Tournament quarterfinals Thursday to snap an untimely four-game skid.

Sandro Mamukelashvili had 20 points and 11 rebounds in 44 minutes for the fifth-seeded Pirates (14-12), who desperately needed a win to boost an NCAA resume that seemed pretty solid not so long ago.

“Obviously, we knew that the tournament was at stake,” Rhoden said. "You can’t think about that tournament. We are trying to win this one first.”

Myles Cale added 16 points and eight boards, and Ike Obiagu blocked seven shots before fouling out as Seton Hall advanced to face Georgetown in the first semifinal Friday night at Madison Square Garden. The eighth-seeded Hoyas upset top seed and No. 14 Villanova 72-71 earlier in the day.

“We feel like this is our second home,” Pirates coach Kevin Willard said.

Big East scoring champ Julian Champagnie led St. John's with 16 points on 7-of-21 shooting and nine rebounds. Rasheem Dunn scored 15 for the fourth-seeded Red Storm (16-11), who went cold after halftime and shot 33% from the floor overall — including 6 of 25 (24%) from 3-point territory.

St. John's hasn't reached the Big East semifinals since winning the 2000 tournament — quite a long drought for one of the league's charter members.

In a possible NCAA Tournament eliminator, Seton Hall avenged an 81-71 road loss to its Hudson River rivals five days earlier in which the Pirates blew an 18-0 cushion. Now, they could represent the Big East's best chance to get a fourth team in the NCAA field along with Villanova, Creighton and UConn.

“They just wanted it more than us,” Dunn said.

St. John's tied it at 60 on a 3-pointer by Marcellus Earlington with just under two minutes left in regulation. Dunn's two free throws put the Red Storm ahead before Cale pulled the Pirates even on a driving layup with 54 seconds remaining.

Champagnie and Mamukelashvili had late looks but couldn't convert.

Rhoden's foul shot 30 seconds into overtime put the Pirates ahead to stay. Cale hit a turnaround in the lane to make it 70-64 with 1:45 left and Seton Hall sealed it from the line as St. John's fell to 0-3 in overtime this season.

“I love Jared. How hard he plays is off the charts. Today I saw that Jared who is a dog," said Mamukelashvili, co-Big East player of the year. "Definitely player of the match. So I feel like it’s just the beginning.”

It was the first Big East Tournament meeting between the schools since 2002, and the first time St. John's played at Madison Square Garden since that bizarre ending to last year’s event, abruptly called off because of the emerging coronavirus pandemic with the Red Storm leading top-seeded Creighton 38-35 at halftime of the initial quarterfinal — negating the first-half statistics.

Normally, the Red Storm schedule high-profile matchups at The Garden, but virus restrictions put all their home games this season on campus at a virtually empty Carnesecca Arena in Queens.

Seton Hall was glad to be back at MSG, too, even if there was a different atmosphere than usual. Each school in the quarterfinals was given 100 tickets to Thursday’s games.

“Man, I walked into this building, I got on the elevator, and I haven’t felt that good in years,” Willard said. “It’s very emotional for the fact that I love this tournament. I love this league. We’ve had some great games in this building and to be back was just an absolutely energizing feeling.”

Point guard Posh Alexander, the Big East freshman of the year and co-defensive player of the year, returned to the Red Storm after missing two wins with a sprained right thumb. But he wasn't sharp. Alexander came off the bench and played 33 minutes, finishing with three steals and six points on 2-for-8 shooting.

St. John's was without 6-foot-10 forward Isaih Moore, which certainly hurt inside. He was required to quarantine due to contact tracing after a member of the program's support staff tested positive for COVID-19. Moore averaged 9.2 points and 4.8 rebounds this season and scored in double digits five of the previous six games.

Seton Hall: After stopping their losing streak perhaps just in time, the Pirates hope a strong performance at MSG can get them in the NCAAs. Seton Hall is the last program besides Villanova to win the Big East Tournament, taking the 2016 title.

St. John's: If not for February lapses against No. 10 seed Butler and last-place DePaul, the Red Storm would be eyeing an at-large NCAA berth right now. But they still have postseason aspirations after a resurgence under second-year coach Mike Anderson. Picked ninth in the Big East preseason coaches' poll, St. John's earned a tournament bye for the first time in six years and its highest seed since No. 3 in 2000.

Seton Hall: Split two meetings with Georgetown this season, with the home team winning each one.

St. John's: Could be a candidate for a pretty high seed at the NIT in Texas. Pairings for the reduced field of 16 will be announced Sunday night.

“We will continue to play. These guys deserve it," Anderson said. “If given the opportunity, I think it would be beneficial for this team.”