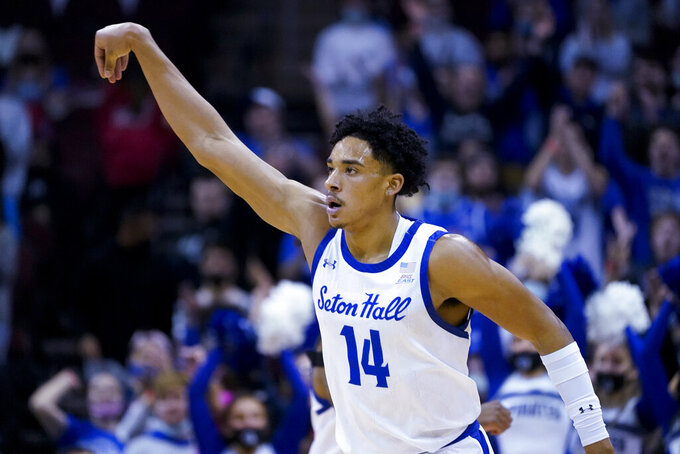 “They got us on the glass,” Xavier coach Travis Steele said. “I thought they absolutely punked us early on in the game. They set the tone. I think shot selection has been our problem. (With) our ball movement in the first half, I thought we fixed that tonight but then turnovers and the offensive glass really cost us.”

Seton Hall led by 10 at halftime but the margin was trimmed to 42-41 on Scruggs' layup with 14:25 remaining. The Pirates responded by outscoring the Musketeers 13-4 over the next 4:34.

Xavier would not go away, cutting the deficit to 60-57 on Cesare Edwards' jump hook with 4:23 left. Rhoden converted a layup on the ensuing possession and then knocked down a 3-pointer before Myles Cale's layup pushed the lead to 67-59.

Xavier ripped off a 6-0 spurt to close the gap to 67-65, but Rhoden made two free throws. Xavier closed within two again when Colby Jones hit two free throws with 19.5 seconds left.

Rhoden sank one of two at the line and Seton Hall’s lead was three with 18.9 seconds remaining. Jones missed a 3 from the right corner and Cale's free throw stretched it to 71-67 before Scruggs brought the Musketeers within two on a layup.

Rhoden made a free throw before Scruggs drained two of his own to make it a one-point game.

Jamir Harris hit one of two free throws for Seton Hall, and Scruggs' desperation heave from halfcourt was wide right.

“It shows what Seton Hall is about,” Rhoden said. “We always have guys stepping up.”

Seton Hall had a 37-27 lead at the end of the first half. The Pirates opened a 14-point advantage on a 3 by Kadary Richmond, who bounced off the ground and spun 180 degrees in celebration after his shot fell through.

“They were the harder-playing team,” Steele said. “Especially in the first half.”

The teams will meet once more in the regular season, Feb. 26 at Xavier.

Xavier: Rebounding has been among the Musketeers’ strengths this season. It was a significant weakness against Seton Hall, as the Pirates finished with a 41-28 advantage on the glass. Xavier entered averaging 34.9 rebounds per game and led the Big East with a .766 defensive rebounding percentage. …Starting forward Zach Freemantle fouled out with 13:39 left after getting tangled up with Seton Hall’s Tray Jackson. Freemantle, who entered averaging 9.9 points and 5.2 rebounds, finished with four points and one rebound.

Seton Hall: Started a stretch that could go a long way toward determining its postseason fate. Seton Hall visits No. 15 Villanova on Saturday before facing No. 24 UConn next Wednesday. After that, the Pirates finish the regular season against DePaul, Butler, Xavier, Georgetown and Creighton. Those five teams entered the day with a combined 18-38 record in conference play.

Xavier: Will host No. 24 UConn on Friday night.

Seton Hall: Plays at No. 15 Villanova on Saturday.