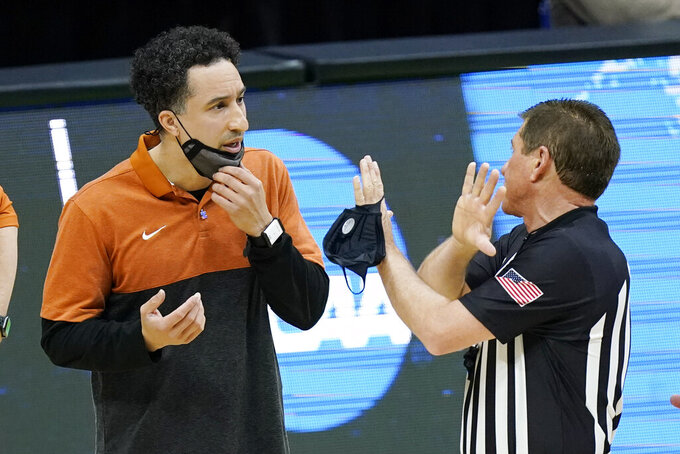 Texas head coach Shaka Smart, left, talks with an official during the first half of a college basketball game between Texas and Abilene Christian in the first round of the NCAA tournament at Lucas Oil Stadium in Indianapolis Saturday, March 20, 2021. (AP Photo/Mark Humphrey)

MILWAUKEE (AP) — After a frustrating six-year stint at Texas in which he never quite lived up to lofty expectations, Shaka Smart is returning to his home state and starting over at Marquette.

Marquette officially announced Friday that it had hired Smart to replace Steve Wojciechowski, who was fired a week ago. The move came six days after Smart’s Texas team was upset 53-52 by Abilene Christian in the first round of the NCAA Tournament.

“Throughout the search, one individual continued to rise to the top, and that was Shaka,” Marquette athletic director Bill Scholl said in a statement. “I am beyond excited for our current and future student-athletes who will have the great fortune of being mentored by Shaka. He is a great teacher of the game, while also being a great molder of young men."

Smart, who turns 44 on April 8, will be formally introduced at a Monday news conference.

Smart went 109-86 with no NCAA Tournament victories at Texas after a remarkably successful six-year run at VCU, where he went 163-56 and led the Rams to a Final Four appearance in 2011. Texas went 19-8 this season and won the Big 12 Tournament before its early NCAA exit.

"I am extremely excited to get to Milwaukee to begin building relationships and getting to work on the court!” Smart said in a statement.

This marks a bit of a homecoming for Smart, who went to high school at Oregon, Wisconsin, just outside Madison. His arrival should provide a burst of energy for a Marquette program that went 128-95 overall and 59-68 in Big East competition during Wojciechowski’s seven seasons.

Marquette went 13-14 this season for its first losing season since Wojciechowski’s debut year of 2014-15.

“Shaka will be the first person of color to lead our program, and is a true role model for our student-athletes," Marquette President Michael R. Lovell said in a statement.

Smart had two seasons left on a Texas contract paying him more than $3 million per year.

Texas hired him to replace Rick Barnes, who was fired after making the NCAA Tournament 16 times in 17 seasons. Smart faced the immediate expectation he’d not just match that sort of consistency, but ignite the program with the sort of success he’d had in leading VCU to the Final Four.

The Longhorns haven’t been to the Final Four since 2003 and haven’t made it out of the second round of the tournament since 2008.

Instead, Smart’s years in the Big 12 proved to be a struggle despite recruiting some elite talent to campus. He finished below .500 in the Big 12 three times and had just three NCAA Tournament appearances. Texas also likely would have earned an NCAA bid in 2020 if the pandemic hadn’t shut down the season.

This season was arguably Smart’s best at Texas.

The Longhorns were ranked as high as No. 4 in the Associated Press Top 25 and were ninth heading into the NCAA Tournament. But their first-round loss as a No. 3 seed to No. 14 seed Abilene Christian embarrassed Longhorns fans and re-ignited calls for him to go that had seemed to cool down.

This season, Texas had two players, Greg Brown and Kai Jones, who project as likely first-round picks. Jones already has declared he will turn pro. Brown has been expected to leave after his freshman season since arriving on campus.

Smart also had to lead his program an emotional time in January 2018 when one of his best players, Andrew Jones, was diagnosed with leukemia and didn’t play for the rest of that season or most of 2018-2019. Jones eventually returned and led Texas in scoring this season as a senior.

Scholl said after firing Wojciechowski that “competing pretty consistently at the top of the Big East certainly, a pretty regular stream of NCAA bids and the occasional opportunity to run deep in March, I think those are all things we as a program should aspire to.”

The Golden Eagles had that type of success recently under Tom Crean and Buzz Williams, the coaches who preceded Wojciechowski. Marquette made a Final Four in 2003 thanks largely to Dwyane Wade and had eight straight NCAA bids from 2006-13. That eight-year stretch included one regional final appearance in 2013 and two more trips to the Sweet 16 in 2011 and 2012.