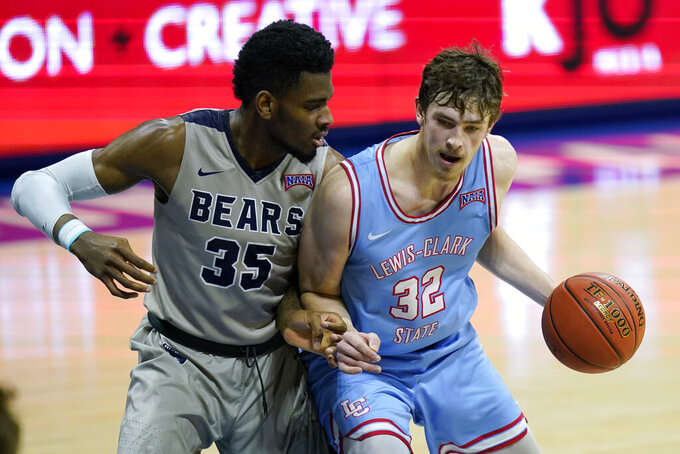 KANSAS CITY, Mo. (AP) — James Jones had 27 points and 10 rebounds for his third double-double of the season and Shawnee State (Ohio) claimed the program's first NAIA Tournament championship with a 74-68 victory over Lewis-Clark State (Idaho) on Tuesday night.

Gilmore finished with 14 points and six rebounds, and Miles Thomas added 10 points for Shawnee State. Jones was 8 of 20 from the floor to score 20-plus for the 14th time this season.

“All we've been talking about is be different, be special, and these guys just did it,” Shawnee State coach Delano Thomas said. “Now they have a great example of how special they are. I'm just proud of this group right now."

Shawnee State won despite the Mid-South Conference's offensive and defensive player of the year battling foul problems. EJ Onu, a 6-foot-11 center, picked up his third and fourth fouls 15-seconds apart early in the second half, and spent most of the game on the bench before fouling out late. He finished with six points, six rebounds and five blocks.

Damek Mitchell, the player of the year in the Cascade Conference, led Lewis-Clark State (22-2) with 21 points, eight rebounds and five assists. Khalil Stevenson added 19 points and Trystan Bradley had 11.

Hodges Bailey, who scored a season-high 25 points including seven 3-pointers in Lewis-Clark State's 27-point win in the semifinals, did not score until the 16:27 mark of the second half on a putback. His only 3-pointer came from the corner to get within 50-40.

NBA legend John Stockton was in attendance watching his son Sam and his Lewis-Clark State teammates try for the program's first basketball title.