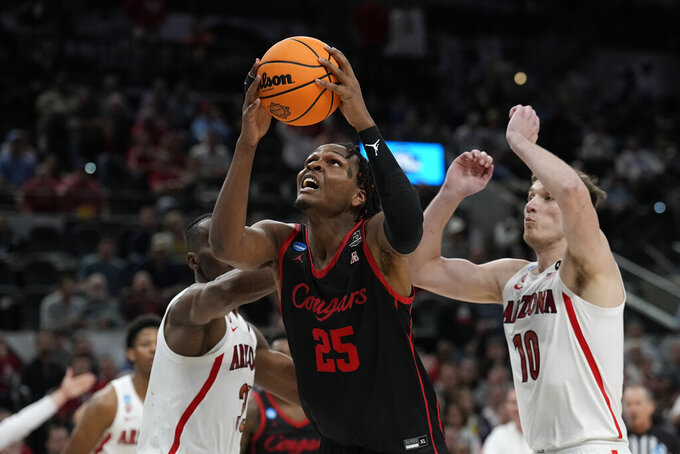 Houston center Josh Carlton shoots against Arizona during the first half of a college basketball game in the Sweet 16 round of the NCAA tournament on Thursday, March 24, 2022, in San Antonio. (AP Photo/Eric Gay) 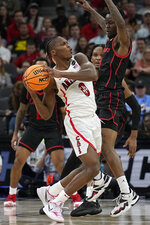 SAN ANTONIO (AP) — Houston coach Kelvin Sampson gritted his teeth and raised his arms before emphatically pounding his right fist into his left hand 11 times while celebrating with ecstatic Cougars fans who were not too far from home.

Another No. 1 seed is out, and Houston is one win way from playing in its second straight Final Four after leading throughout in a 72-60 victory over Arizona in an NCAA South Regional semifinal game Thursday night.

“I knew we were going to make them uncomfortable, that’s what we do,” Sampson said. “Our team, we’re a tough bunch. ... They’re not afraid of anybody.”

Jamal Shead, a 19-year-old second-year guard, scored a career-high 21 points and experienced guard Kyler Edwards had 19 points with five 3-pointers. They both played 38 minutes after Taze Moore got in early foul trouble.

“We always feel like we’re the toughest team out there and we play like that .... we can’t be scared of anybody,” Shead said. “The energy was just electric. It was awesome to have that type of crowd here.”

Consecutive layups by Dalen Terry got Arizona within 64-58 with just over two minutes left. But Edwards, the transfer from Texas Tech who played in the 2019 national championship game for the Red Raiders, settled things for Houston with a 3 from the right wing.

The No. 5 seed Cougars (32-5) play second-seeded Villanova in the South Region final on Saturday in San Antonio, about 200 miles from the Houston campus.

“It was a tough game. There’s a lot of things we could have done better to win the game,” Mathurin said. “I don’t have a lot to say.”

The American Athletic Conference champion Cougars became the second former Southwest Conference team to knock a No. 1 seed out of this NCAA Tournament in a matter of hours. Top overall seed Gonzaga lost 74-68 to Arkansas, which went to the SEC in 1991, five years before the SWC’s final season.

These Cougars are much different than the ones Sampson took the the Final Four last year — their first since going three times in a row during the Phi Slama Jama era from 1982-84.

Houston lost four starters from last season and then lost Marcus Sasser, the lone returner and leading scorer who broke his left foot before Christmas. Sophomore guard Tramon Mark had a season-ending shoulder injury before that.

Arizona had one of the least-experienced teams in Division I this season; according to KenPom.com, the Wildcats average 0.63 years of experienced, ranked 355th out of 358 teams. But they won 33 games, and two of their losses were on the road during the regular season against top-20 teams.

Those 33 wins left Tommy Lloyd one win shy of the most in NCAA history for a first-year coach. He took over the Wildcats after 21 seasons as an assistant coach for Mark Few at Gonzaga.

The Wildcats missed seven of their first eight shots, and trailed by double digits for the first time after Houston scored seven points in a 57-second span for a 14-4 lead. That quick spurt included Shead getting a rebound to start a fastbreak that ended with his pass to Ramon Walker Jr. in the left corner for an open 3, and a driving layup by Edwards after a turnover.

Moore, a graduate transfer, had a career-high 21 points in Houston’s second-round win over Illinois, but his early 3 to make it 5-0 Houston in the first two minutes was all he’d score against the Wildcats. He committed his third personal foul with 9:22 left and played only 17 minutes overall.

“The guy that’s been really good for us, Taze Moore, was a non-factor. ... Tonight, you know, he was in the witness protection program. I couldn’t find him. Nowhere," Sampson said. "We put him in there, we had to take him right back out.”

Arizona was within 34-28 at halftime when Koloko made both free throws after a whistle and a replay review when 0.6 seconds were put back on the clock. Sampson and the Cougars thought the half was over, and Mathurin thought he had been fouled going for the rebound on Koloko’s miss as the buzzer sounded, but the refs ruled a foul on Koloko’s shot after looking at the replay.

Arizona: The Wildcats needed overtime to beat TCU in the second round, but they got off to the slow start shooting and never recovered in the Sweet 16 game. They shot 33% (18 of 54) and had 14 turnovers that Houston turned into 24 points.

Houston: The Cougars have been to six regional finals in the past. They won each time to advance to the Final Four. ... When Arizona was down only two early in the second half, Edwards hit a 3-pointer. Terry hit a 3 a few minutes later to get the Wildcats within a bucket again, but Shead responded with another from long range.

Houston and Villanova haven’t played since the Cougars’ 79-49 win on November 23, 1991. The two teams have played twice in the NCAA Tournament — Houston won in 1983 and Villanova won in the 1981 tourney.