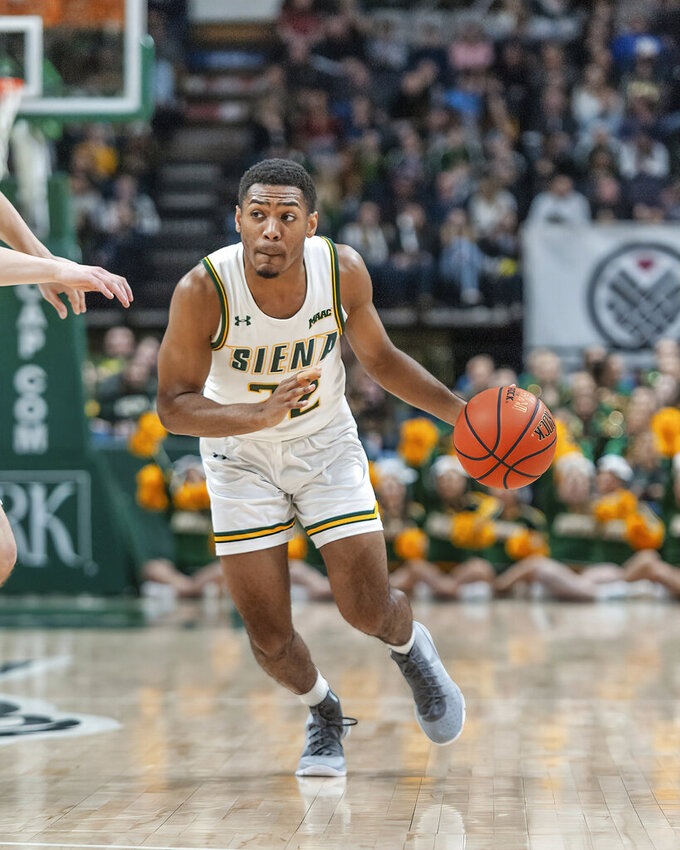 In this Jan. 27, 2019 photo provided by Siena College, Siena point guard Jalen Pickett drives against a Manhattan College defender during their game at Siena College in Loudonville, N.Y. Pickett, who averages 15.5 points and leads the MAAC with 6.4 assists per game, has helped lead Siena into contention for the Metro Atlantic Athletic Conference regular-season title. (Rob Simmons/Siena College via AP) 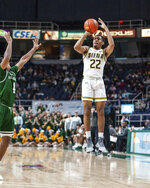 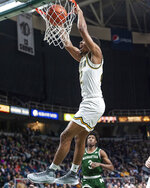 LOUDONVILLE, N.Y. (AP) — Jalen Pickett is right where he wants to be — with the ball at the top of the key in a tie game late in the second half.

The 6-foot-4 freshman point guard for the Siena Saints backs in against a Fairfield defender in his workmanlike way, dribbling deliberately as he slowly inches back toward the net, his eyes darting from side to side surveying the defense. Pickett senses an opening, quickly spins and hits a fall-away 3-pointer, then follows with a three-point play less than a minute later and the Saints win for the fifth time in six games.

Two days earlier, Pickett had scored 10 straight points to erase a seven-point deficit in the second half on the road against defending Metro Atlantic Athletic Conference champion Iona. He sealed a two-point victory with a pair of free throws with 22 seconds left.

"It's every kid's dream to do good in crunch time," said Pickett, who's averaging 6.46 assists to lead the MAAC. "But just coming out and playing the right way every day, keep making the right plays down the stretch, is what I look forward to. It was just my time in those moments."

Pickett's impressive performance in his rookie year has helped lead Siena to unexpected success. When the MAAC coaches voted in the annual preseason poll, they picked Siena to finish last. No surprise there. The program was in disarray after the resignation of Jimmy Patsos last April amid a swirl of controversy in the wake of an 8-24 season. It was Siena's third-worst showing since it moved to Division I more than 40 years ago and its third straight losing season.

That was then. New coach Jamion Christian has the Saints relevant again. Despite a two-game skid last week, at midweek they were 14-14 — one of only three MAAC teams at or above .500 — and in a five-way tie for second in the league at 9-6, just a half-game behind Canisius.

"I feel great about the progress we're making," Christian said. "I think our guys are getting older, getting more experience. That's going to help. We're just evolving as a team. Everyone's doing their job."

As soon as he was hired by Siena last May, Christian began seeking players and called Jimmy Hart, director of the Albany City Rocks, a top AAU program. Hart recommended Pickett, a native of Rochester, New York, who had spent one year in prep school in Ohio but had less than a handful of Division I offers despite performing at a high level for the City Rocks for four years.

"He was kind of a guy that was always under the radar because he wasn't flashy, he wasn't the most explosive, he didn't look like he was the quickest," said St. John Fisher men's basketball coach Mike Grosodonia II, who coached Pickett in high school. "He just always got the job done. He's a winner."

Iona coach Tim Cluess figures he most likely saw Pickett play for the City Rocks at some point. Only now has Pickett left a lasting impression.

"It's just his pace, putting his back on you, working for the right angle, make the simple play," Cluess said. "He really reads and sees what's going on out there. He's never rushed, never out of control, and he makes the right play nine out of 10 times.

"What makes him different is he's big enough to score in the post on guys," Cluess added. "When you have a small guy on him, he's willing to work his way down, and if you switch, he's a willing passer. He's not trying to worry about getting 20 points a game. He's worried about making the right basketball play. Very impressive. You don't see a guy like that very often."

"I don't have the flashiest game. Some coaches might not like the style I play," Pickett said. "I'm not the most athletic guy, but I come out and play hard and I work every day. It's always been like that for me. My family just taught me how to play the game the right way, taught me how to win."

Pickett has been named MAAC rookie of the week a school-record nine times. That's one off the league mark set by former La Salle star Lionel Simmons (1986-87) and matched by Fairfield's Derek Needham (2009-10). Pickett also swept the MAAC weekly awards in early December, becoming just the third freshman in 32 years to be player of the week.

"Huge difference (for the team)," redshirt senior guard Kadeem Smithen said. "With him just coming in and being so young and being so focused and even-keeled, it's just great for us upperclassmen. He's been great for us."

Siena lost 10 of its first 15 games as the team adjusted to Christian's style of play, then reeled off seven wins in eight games to become a contender for the regular-season MAAC title. Pickett has scored 20 or more points six times, including a season-high 46-point, 13-assist performance last Sunday in a triple-overtime loss at home to Quinnipiac that cost Siena a share of the conference lead. Pickett had 17 points and six assists in the final 13 minutes of regulation to help erase a 20-point deficit, not enough to offset Cameron Young's 55 points, the most in Division I this year.

"The biggest thing that gets overlooked is the amount of responsibility he has throughout the game, bringing the ball up every possession," said senior forward Evan Fisher, who leads the team in scoring. "He's stepped up in big moments."

Siena has not played in the NCAA Tournament since the days of Fran McCaffery, who led the Saints to three straight appearances (2008-10) during his five years at the helm before departing for Iowa. Only three games remain in Siena's regular season before the MAAC Tournament presents the chance to break that slump. That the games will be played on Siena's home court — the Times-Union Center in downtown Albany — will at least give the Saints a decided home-court advantage.

It's a nice setting for a budding star.

"I think I've surprised myself a little bit, but I have put in a lot of hard work," Pickett said. "To see some of the results and get a lot of wins, I'm actually able to see it now."