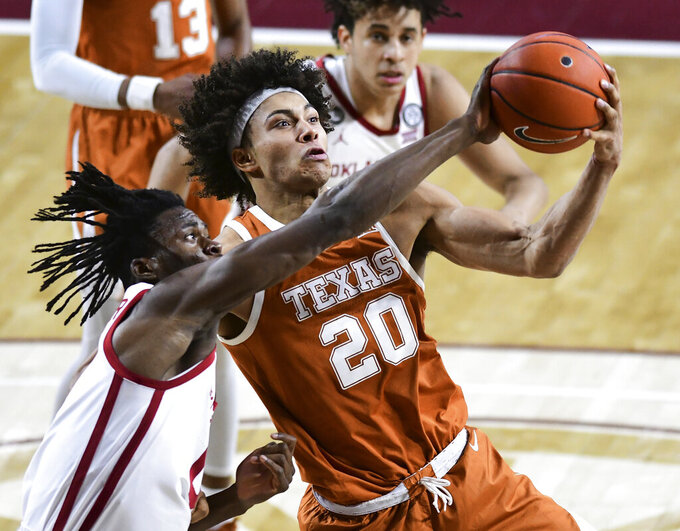 Smart was recovering from COVID-19 and Sims was among several Longhorns who were unavailable when the Sooners won the first matchup by a point.

Both were available for the rematch, and Sims matched season highs with 16 points and 12 rebounds to help No. 15 Texas beat No. 16 Oklahoma 69-65 on Thursday night.

Smart remembered how it felt watching the first matchup.

“It was very upsetting," he said. “Watching that game was one of the worst basketball experiences of my life because I just felt helpless and I knew our team was just less than whole.”

This time, the Longhorns had the depth they needed. Their relative good health has helped them win three of their past four games.

“This time of year, the best teams that make it far in the NCAA Tournament are playing in the best rhythm," said guard Courtney Ramey, who also was unavailable for the first matchup. “It’s about just getting in a rhythm as a team and solidifying what we want to do each and every game. Today was a good step in the right direction of what we want to do.”

Austin Reaves scored 16 points and Alondes Williams and Brady Manek each added 13 for the Sooners. Oklahoma (14-9, 9-8) has lost four straight games by a combined 17 points.

“Obviously, again, very similar to the last couple," Oklahoma coach Lon Kruger said. “Super disappointing result. First half, Texas dictated. I thought second half, certainly, a different level of intensity to come back and take the lead. Again, have to do some things better for 40 minutes. No question about that. Texas is awfully good, and you can’t afford to not play 40 minutes against them."

The Longhorns got loose on a fast break late in the first half, and Jones' one-handed jam put Texas up 41-30. Reaves banked in a deep 3-pointer as time expired in the first half to cut Texas' lead to 44-34.

Oklahoma went on a 7-0 run early in the second half to cut Texas' lead to five.

Oklahoma center Kur Kuath's block sparked a fast break, and Reaves' putback cut the Texas lead to 53-50. A steal and layup by Elijah Harkless cut Texas' lead to one, and a two-handed jam on the fast break by De'Vion Harmon finally gave the Sooners the lead with just under eight minutes to play.

The game came down to the final minute. After Texas' Matt Coleman III drained a short jumper with 12 seconds left to put the Longhorns up four, Reaves got a quick layup with six seconds remaining. The Sooners fouled Greg Brown, and the freshman made two free throws with four seconds remaining to put the game out of reach.

Coleman was 0 for 5 from the field with five turnovers before he made the shot in the final minute.

“Matt Coleman had a tough, tough night," Smart said. “He looked tired, he looked a little down. But he responded and made a huge shot for us, which is what high character guys do.”

Just a few weeks ago, Oklahoma was ranked seventh in the nation. Now, the Sooners will have to play a first-round game in the Big 12 Tournament.

“We’ve just got to let this loss get past us and just focus on the future," Williams said.

Texas: The Longhorns are peaking at the right time. Their size and athletic ability caused problems for the Sooners, and those things could carry them far in the postseason.

Oklahoma: The offense got bogged down, and the Sooners shot just 37% in the game. They aren’t playing horrible basketball, they are just coming up a bit short.

“The margin is small," Kruger said. “It’s one play here, one play there. I don’t think we’re playing much differently than when we won seven out of eight. We’ve got to finish games differently. Those games we did finish, these games we haven’t."

Kuath entered the game with 12:23 remaining and the Sooners down six, but he sparked a rally and immediately allowed the Sooners to match Texas' athletic ability. The senior had two blocks and three rebounds in 12 minutes and was one of just two Sooners to finish with a positive plus/minus score.

“They really turned up their defensive intensity,” Smart said. “I thought Kur Kuath was phenomenal on defense for them and changed the game.”

Oklahoma will play in the Big 12 Tournament.