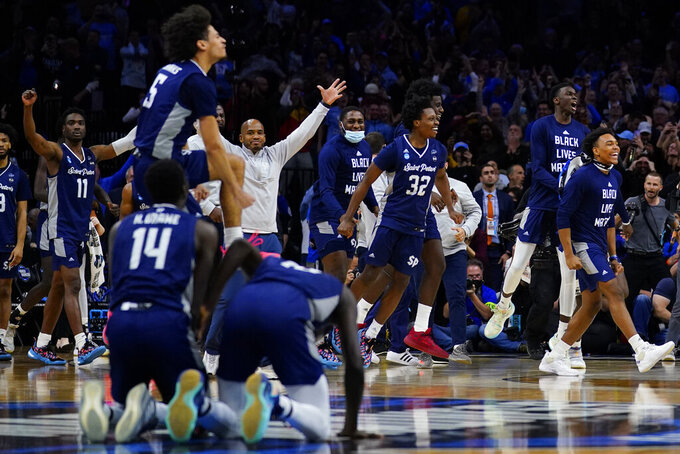 Saint Peter's celebrates after winning a college basketball game against Purdue in the Sweet 16 round of the NCAA tournament, Friday, March 25, 2022, in Philadelphia. (AP Photo/Matt Rourke)

NEW ORLEANS (AP) — The euphoric wave originates in a single seismic event, 40 minutes of unexpected excellence washing out brackets across a nation.

A small school, around forever yet seeming to come out of nowhere, finds being a March Madness darling pays long-term dividends.

Some go one-and-done. Others roll on, successive tremors generating larger swells, each cresting higher than the previous, a national bandwagon growing in their wake.

Saint Peter's is still riding the initial surge from its Elite Eight run, recognition and applications rising, the school book store emptied. The Peacocks will eventually hit peak popularity, but the residuals will flow for years to come.

“A lot of people, if you say Saint Peter’s, they’d probably ask what state are they in, but they can all you tell you now for sure,” Florida Gulf Coast athletic director Ken Kavanagh said. “And they probably won't forget anytime soon.”

Upsets and extended underdog runs are the cornerstones of March Madness' mass appeal, unpredictability fueling a fervor unlike anything in sports. The moments remembered most often come the small schools.

George Mason to the Final Four in 2006. Stephen Curry shooting Davidson into the 2008 Elite Eight. Butler to successive championship games. FGCU and Dunk City reaching the 2013 Sweet 16. No. 16 Maryland-Baltimore County over No. 1 Virginia in 2018, Loyola Chicago and Sister Jean to the Final Four in the same bracket.

Each upset puts a marker on the map. Small schools from previously-unknown places earn a spot on the marquee with college basketball's blue bloods and repeat deep March runners.

The awareness shines a light on the school, both academics and athletic programs. Curiosity follows, with it a rise in admission applications.

Florida Gulf Coast saw a 35% increase — a 90% bump from out state — the year after its Sweet 16 run and now has students from 33 countries and 32 states. Loyola Chicago had its two largest freshman classes after going to the Final Four and last year's Sweet 16 run. Davidson and UMBC saw similar increases.

“It provided the lens so that people can see the good work that’s being done in terms of research and educating the future leaders of tomorrow,” said former UMBC athletic director Tim Hall, now the AD at Southern Illinois Edwardsville. “Now there’s more people paying attention to UMBC. Why? Because of what they did on this big national stage in basketball.”

Merchandising gets a piece of the surge.

In the immediate upset aftermath, the school bookstore gets picked clean, appearing ransacked. The rush for underdog gear expands across the town onto the internet, bandwagoners filling their online shopping carts.

Before FGCU's Sweet 16 run, no one in the shopping center across the street carried Eagles gear. Now Dick's Sporting Goods, Target and stores all around the Fort Meyers area are flush with Dunk City merch.

“Those the kind of things that aren’t necessarily changing our world, but they do make a difference when revenues increase in those line items,” Loyola Chicago athletic director Steve Watson said.

The wave spreads into recruiting.

Name recognition gets previously ignored calls picked up. It gets a foot in the door, giving coaches a chance to open a view into the program and the school.

Davidson's recruiting classes climbed from No. 293 nationally to No. 209 after the 2008 run, according to the 247 Sports composite. Loyola Chicago went from No. 101 to No. 87 after reaching the Final Four.

And it's not just the basketball programs that benefit. March Madness recognition carries.

“All our coaches talk about how people are picking up the phone more so than in the past when you say Loyola,” Watson said.

March exposure gave Davidson a chance for even more visibility.

The Wildcats had a stretch of three Sweet 16s in four seasons under coach Lefty Driesell in the late 1960s. The run came before the ultra-hyped days of the NCAA Tournament and was so long ago, even people who lived in western North Carolina all their lives were unaware.

The run by Steph Curry and the Cats brought Davidson reminded the basketball world of the program's place in basketball history. The Wildcats continued to pop up in the bracket and, with an assist to Curry's continuing strong connection, made a move from the Southern Conference to brighter lights and deeper respect in the Atlantic 10.

“We had our history in the 60s and it took 50 years to recapture that,” said Bob McKillop, Davidson's coach since 1990. “We were equally fortunate that put us on a stage that got us into the Atlantic 10, which is significantly more high-profile conference than we were in.”

The Wildcats and their brethren underdogs continue to ride the wave.