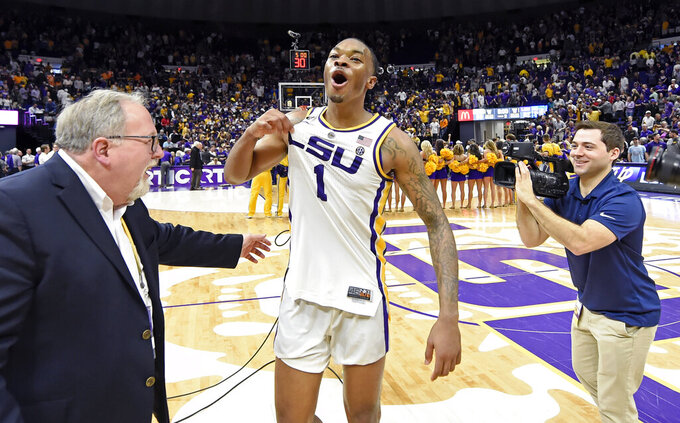 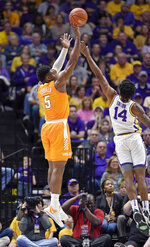 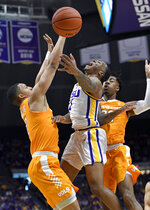 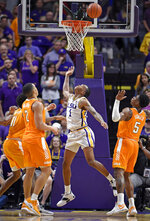 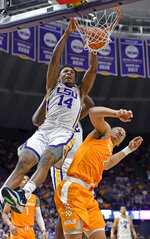 BATON ROUGE, La. (AP) — Javonte Smart waved both arms upward as he turned to the frenzied crowd inside the packed Peter Maravich Assembly Center, pounded his chest and hollered triumphantly.

It was as if the freshman, who grew up near Baton Rouge, knew he'd make the free throws LSU needed to close out an emotional victory — and realize a scene from his childhood dreams.

Smart capped a career-best 29-point performance with a crucial rebound and go-ahead free throws in the final seconds, and No. 13 LSU outlasted fifth-ranked Tennessee 82-80 in overtime on Saturday.

"I just had a lot of fun," Smart said, noting that he did not miss a free throw during Friday's practice. "I just said, 'Practice makes perfect,' and I went up to the free-throw line with a lot of confidence."

Smart played the final six minutes of regulation with a lot of confidence, too. He scored 11 straight Tigers points — primarily on explosive dribble drives — to prevent Tennessee from pulling away.

Skyler Mays added 23 points, including a game-tying 3 with 1:16 left in regulation for LSU (22-5, 12-2 SEC), which pulled into a three-way tie with Tennessee and Kentucky atop the Southeastern Conference despite playing without its leading scorer, point guard Tremont Waters.

Mays and his teammates ran toward the student section when the game ended, several jumping on top of a baseline media table to soak up adulation from raucous fans.

"I feel like we are really part of something special," said Mays, who played for LSU's last-place team in 2017. "This year is starting to look like a turning point in LSU basketball."

LSU coach Will Wade grabbed the public address microphone before he left the court and thanked the crowd.

Admiral Schofield had 27 points and Grant Williams 18 for Tennessee (24-3, 12-2), which has lost two of three after spending about a month ranked first in the nation. Williams missed nine of 14 shots but nearly willed the Volunteers to a victory with a strong finish.

Tennessee coach Rick Barnes said the Vols will "have to understand" that they are "going to be in close games from here on out."

"The way we execute down the stretch, not turning the ball over, staying within ourselves, is what we need to do," Barnes said. "We've got to be able to stay in front of the basketball and not let people get to the rim. We've got to get to the free-throw line more."

Still, Tennessee led nearly all of the second half until Mays' 3 tied it and his free throws in the final minute of regulation gave LSU a brief lead.

Williams, who scored inside with 33 seconds left to help the Vols force overtime, put Tennessee in front late in OT with a layup while he was fouled. However, Kavell Bigby-Williams tied it with a putback of Naz Reid's miss with 6 seconds left.

Lamonte Turner had a chance to win it for Tennessee, but the timing of his miss from 3-point range was less than ideal for the Vols. A couple seconds remained as both teams scrambled for a long rebound. Smart came up with it before Tennessee's Williams collided with the Tigers' freshman and was called for the decisive foul.

"We should have got a better look the last time down the floor," Barnes said. "That situation you certainly want to have the last shot of the game and we didn't do that."

Waters, who averages 15.7 points, was ruled out with an undisclosed illness shortly before the game, and the challenge only got tougher for LSU when Reid, who averages 13.8 points, committed two early fouls.

Reid never found his rhythm, missing all nine shots he attempted from the floor. He scored his only point when he made the second of two free throws in the final minute of overtime.

But Smart, who started in Waters' place, helped LSU produce a tense contest against a Volunteer squad that led most of the way.

Bigby-Williams added 10 points and 10 rebounds for LSU, which also got timely contributions from several others.

"We believe in our guys and I told them that last night," Wade said. "We've got a total team and we've got different guys that can step up at different times and we had that today."

Tennessee: The Volunteers will regret losing control after they appeared primed to pull away inside the final 10 minutes of regulation. Their inability to beat an LSU team that had lost to Florida at home four days earlier won't help them in the rankings. Tennessee also did not take care of the ball as well as usual, with 14 turnovers to 10 assists. LSU had 17 points off of turnovers.

LSU: The Tigers' refusal to fold and their ability to overcome virtually no production from Waters and Reid — their top scorers this season — make a statement about how difficult an opponent LSU could become in the NCAA Tournament.