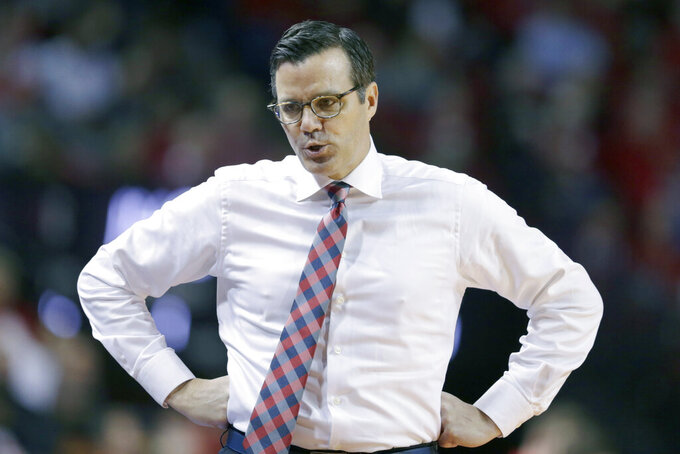 Nebraska coach Tim Miles turns to his bench during the first half of an NCAA college basketball game against Maryland in Lincoln, Neb., Wednesday, Feb. 6, 2019. (AP Photo/Nati Harnik) 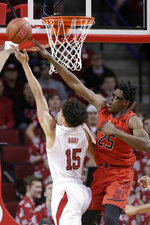 The Terrapins' 60-45 victory Wednesday night was all about defense. Maryland allowed its fewest points in a conference game under eighth-year coach Mark Turgeon.

"Our guys were locked in," Turgeon said. "That's the smartest we've played defensively this season, so it was good to see."

Smith had 18 points and 11 rebounds and fueled Maryland's surge in the first half. Bruno Fernando's production was limited by double-teams, but he still had his sixth consecutive double-double, and 15th of the season, with 13 points and a career-high 19 rebounds for the Terps (18-6, 9-4 Big Ten).

Nebraska (13-10, 3-9) set season lows for points and field goal percentage (21 percent) while losing its sixth straight and dropping to 13th place in the conference. The Huskers were playing their third game without forward Isaac Copeland, who sustained a season-ending knee injury Jan. 26.

"I hope and pray this is rock bottom," Nebraska coach Tim Miles said. "Until we get out of our way on offense and find some rhythm on offense, we have a real problem. I believe it's mental."

"Nobody is really having fun right now," Roby said. "We all had big expectations for this season. Time keeps running out with every game we play."

The Terps were lethargic at the outset, missing 11 of their first 14 shots as offensive leaders Fernando, Anthony Cowan Jr. and Smith went scoreless through the first nine minutes. Meanwhile, Roby scored 12 points as the Huskers jumped to a 15-10 lead.

But then Nebraska had one of its all-too-familiar scoring droughts, this one lasting longer than eight minutes. Smith, whose short runner with 3 seconds left gave the Terps a 74-72 win over the Huskers on Jan. 2, scored 11 straight points to put his team in front after Tanner Borchardt went to the bench with his second foul.

"I was finishing the shots I put up," Smith said. "They had a little guard on me and a big on Bruno. Coach Turgeon just attacked, and I was scoring."

Maryland outscored the Cornhuskers 20-5 to close the half, with Nebraska making just one field goal over the last 11:41. Nebraska drew to 31-29 early in the second half, but the Terps soon were up by double digits again and on their way to bouncing back from a 69-61 loss at Wisconsin last Friday.

Maryland: This wasn't the Terps' best night offensively, but avoiding a fourth loss in five games kept them safely in the upper half of the Big Ten. Cowan scored a season-low five points, Fernando had only two in the first half and Maryland shot 38 percent as a team.

Nebraska: The school's four-game home losing streak is its longest since 2002-03. Glynn Watson Jr. continues to struggle, going 0 for 10 with no points, and Miles' future at Nebraska is growing dimmer. "This hurts," Miles said, his voice cracking.

DID HE OR DIDN'T HE?

One of the big no-calls came in the second half when Fernando moved into Borchardt under the basket, knocking him down, before jamming a one-handed dunk. The play brought howls from fans who wanted a foul and a technical on Miles, who wanted the same thing.

It appeared Fernando might have stepped on Borchardt when he came down. Miles said he didn't know if that was the case, and video was inconclusive. Borchardt wasn't made available to reporters after the game. The play was not reviewable.

"I dunked the ball and I was trying to run back on defense and he was right there on the ground. I was trying to get out of his way," Fernando said. "For me personally, I didn't have any intentions of hurting anybody. That's not who I am. That's not part of my game."

Nebraska: Plays at Purdue on Saturday.