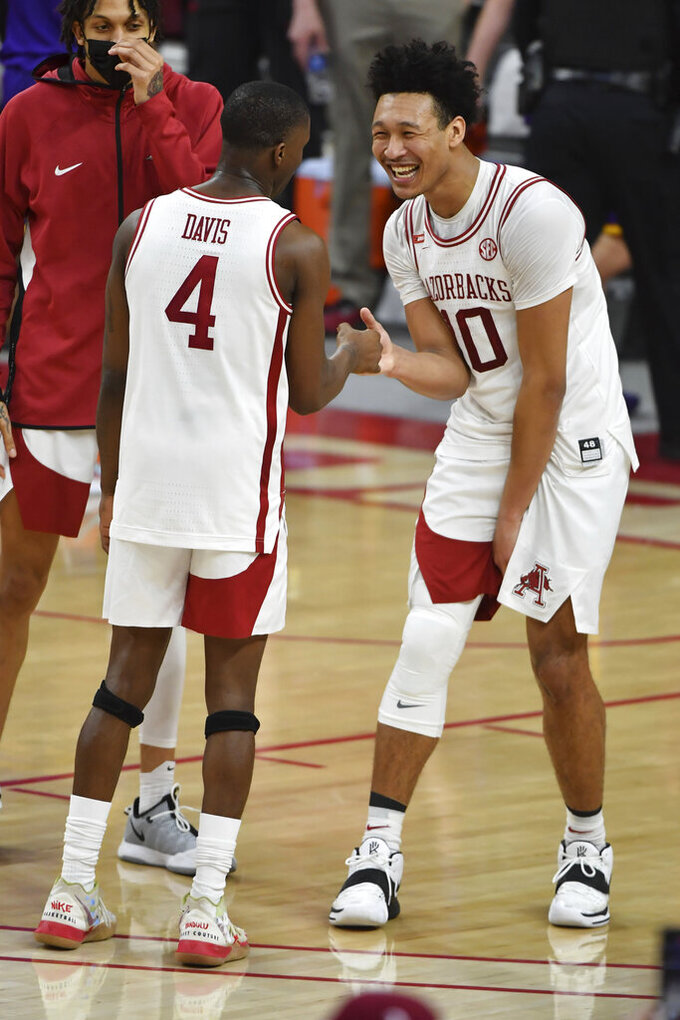 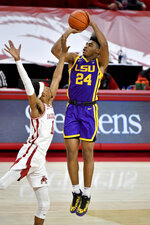 FAYETTEVILLE, Ark. (AP) — No. 20 Arkansas had a perfect February. Justin Smith and company are looking forward to a fun March, too.

Smith had 19 points and 10 rebounds, helping No. 20 Arkansas beat Cameron Thomas and LSU 83-75 on Saturday.

The Razorbacks (19-5, 11-4 Southeastern Conference) had four players score in double figures in their sixth straight win. Moses Moody had 18 points on 3-for-14 shooting, and reserve J.D. Notae also scored 18.

Arkansas also extended their SEC win streak to nine, its longest such run since 1993-94, when the team won the national championship. Its last loss was at Oklahoma State on Jan. 30.

“It feels good. Going an entire month without losing is a big-time accomplishment. A lot of teams don’t get a chance to do that,” Smith said. “I’m proud of the way we came together after the Oklahoma State game. We’re playing our best basketball right now.”

Arkansas grabbed control with a 16-2 run in the second half. Jalen Tate made two foul shots, Davonte Davis scored and Moody capped the surge with a layup, making it 72-55 with 7:04 left.

LSU, one of the highest scoring teams in Division I, went without a field goal for more than five minutes during the key stretch.

“I thought in the second half defensively we were really, really good,” Arkansas coach Eric Musselman said. “To think we held them below 40 percent from the field, really impressive.”

Davis added 15 points for the Razorbacks on 7-for-12 shooting.

Arkansas honored seniors Smith, Tate, Vance Jackson, Khalil Garland and Emeka Obukwelu after the game. Smith, Jackson and Tate are graduate transfers playing their only season with the Razorbacks, and Obukwelu is a walk-on. Garland was a four-star recruit from Little Rock, Arkansas, who was forced to retire from basketball with a heart condition, identified his first year with the team. He spent this season as a student assistant coach.

Arkansas’ win, combined with a Tennessee loss earlier Saturday, secured a top-four SEC finish for the Razorbacks. That means they will have a first-round bye for the SEC Tournament.

LSU is still likely to get into the NCAA Tournament, though a win Saturday would have practically clinched a berth. The Tigers are still in the top four of the SEC, though six other teams are within two games in the loss column, meaning LSU has work to do over its final two regular-season games.

Arkansas travels to South Carolina on Tuesday before finishing the regular season against Texas A&M next Saturday in a make-up game that was postponed because of COVID-19 protocols.