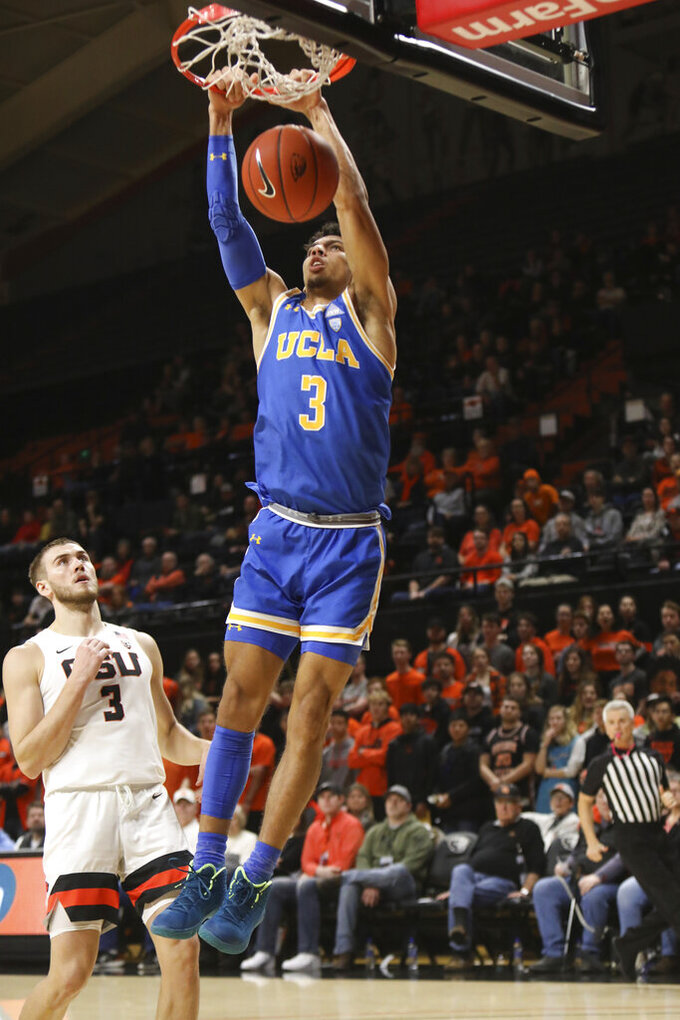 UCLA's Jules Bernard (3) makes it past Oregon State's Tres Tinkle (3) to dunk during the first half of an NCAA college basketball game in Corvallis, Ore., Thursday, Jan. 23, 2020. (AP Photo/Amanda Loman) 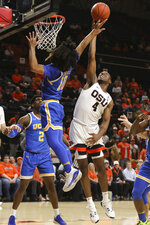 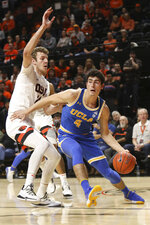 CORVALLIS, Ore. (AP) — With the game in the balance, UCLA’s Chris Smith wasn’t about to settle for perimeter jumpers.

The 6-foot-9 guard scored nine of his 15 points down the stretch, leading UCLA to a 62-58 victory over Oregon State on Thursday night.

“At that point in the game coach (Mick) Cronin told me, ‘somebody’s gotta be able to drive to the cup,'” said Smith, the Bruins’ leading scorer this season. “I was attacking, so the right play was to get fouled. … I was just trying to do whatever I could to get a win for the guys."

Smith, who was limited to just 17 minutes of playing time due to foul trouble, was 4 of 6 from the field and 7 of 9 at the foul line. UCLA made its last nine free throws in the final 1:50 to stay in front.

“I was calling’s his number,” Cronin said of Smith. “He stepped up, got the ball in the paint and made sure that he got to the foul line."

Jalen Hill then made two free throws for UCLA, his first points of the game.

Tyger Campbell fouled Oregon State’s Ethan Thompson with 6.6 seconds left, preventing him from getting off a 3-pointer that could have tied the game.

Thompson made both free throws cutting the lead to one.

Hill went back to the line at the 5.4-second mark and came through again with two free throws.

The Bruins will be at No. 12 Oregon on Sunday.

"We’re gonna use this momentum, roll into Eugene, and try to keep the defensive effort up because that’s what got us to win tonight,” Smith said.

UCLA turned in a strong defensive performance against Tres Tinkle, holding the Pac-12’s second-leading scorer to 17 points on 4 of 14 from the field.

Jaime Jaquez Jr. added 14 points for the Bruins, and Jules Bernard also was in double figures with 11 points.

Thompson joined Tinkle in double figures for Oregon State with 14 points. Reichle hit three 3-pointers in the opening minutes and finished with 12 points.

“We’ve just gotta find a way to defend when we need to defend no matter what (defense) we’re in,” Oregon State coach Wayne Tinkle said.

Tinkle scored inside and Alfred Hollins hit a 3-pointer, cutting the lead to 42-36.

Thompson’s three-point play brought the Beavers within two points at 43-41.

Oregon State took its first lead since early in the game at 44-43 with 7:21 remaining on Tinkle’s three-point play, culminating an 18-4 run.

UCLA led 27-24 at the break and held Tinkle without a basket. Oregon State connected on just 31.6 percent of its shots in the first half and was outrebounded 18-10.

UCLA: The Bruins improved to 2-1 in Pac-12 road games. … Chris Smith entered Thursday’s game as the only Bruins player averaging in double figures, but three Bruins were in double figures against the Beavers.

UCLA will be at No. 12 Oregon on Sunday