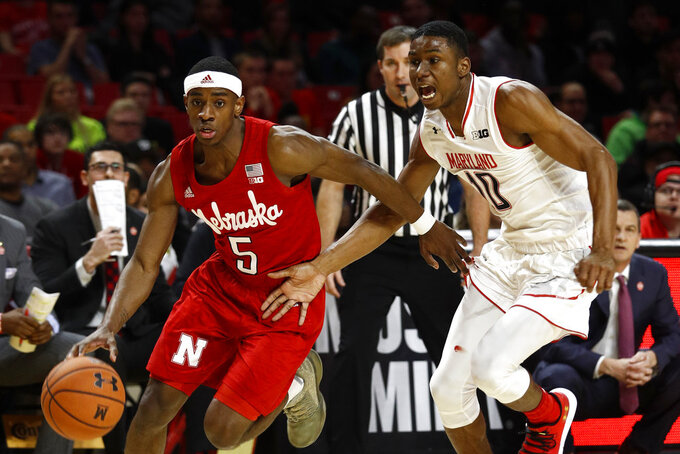 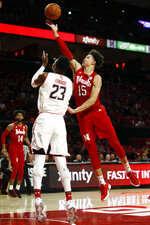 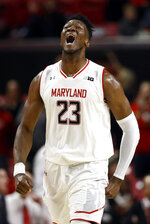 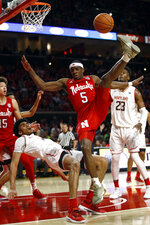 COLLEGE PARK, Md. (AP) — Nebraska's final attempt to score had gone awry, and as the buzzer sounded, Maryland's players rushed to the middle of the court to celebrate the team's most significant victory of the season.

"We beat a really good team. We need that for a confidence builder," coach Mark Turgeon said after the Terrapins used a late push to get past No. 24 Nebraska 74-72 on Wednesday night.

The Terrapins (11-3, 2-1 Big Ten) had previously lost to Virginia, at Purdue and at home against Seton Hall. Turgeon rarely misses a chance to point out that this is "fifth-youngest team in the country," but he also knows that isn't an excuse for losing.

Maryland trailed 71-70 before Smith made a follow-shot off a 3-point try by Cowan with 28 seconds left. After James Palmer converted 1 of 2 free throws for Nebraska, Smith drove the middle of the lane for his decisive layup.

Following a timeout, Nebraska (11-3, 1-2) tried to work the ball up the court before Ricky Lindo Jr. knocked away a pass under the basket to seal it.

"It was extremely encouraging for all of us, just to see how far we've come," Fernando said. "Wins like that mean a lot to us, to the coaches, to everybody at the whole University of Maryland."

"You can't give them eight 3s and not rebound. Pick one that you want to be awful at," Miles said.

It was a tough loss to take, as was an earlier seven-point setback at Minnesota, but Miles accepted it as life in the Big Ten.

"You've got to look at it from a global, big-picture perspective and say, 'This is just the way it's going be,'" he said.

The final minutes went back and forth, with neither team able to take charge.

After a three-point play by Smith put Maryland ahead 70-67 with 2:42 left, Watson made two free throws and Palmer turned a steal into a dunk for a 71-70 lead with 2:13 remaining.

That would be the last time the Huskers were in front.

"You hear the celebration in the opposing locker room, and it's disappointing because you probably played well enough to win but you just didn't do enough little things," Miles said.

The game was tied early in the second half before Maryland missed eight straight shots over a four-minute span while falling behind 47-39.

Fernando ended the drought with a layup and made another before Aaron Wiggins and Cowan drilled 3-pointers to cap a 10-2 run that tied it at 49 with 12 minutes left.

Neither team led by more than four points the rest of the way.

Smith struggled in the first half, scoring only three points in nine minutes.

The Cornhuskers limited Maryland to 28-for-60 shooting. It was the 38th time in 39 games Nebraska's opponent failed to exceed 50 percent, dating to last season. Minnesota topped 50 percent on Dec. 5 in an 85-78 victory.

Nebraska: Playing on the road in a loud arena, the Cornhuskers gave a tough Maryland team everything it could handle. But Nebraska needs to be more aggressive on the boards and against the Terps got only three players to the foul line.

Maryland: The Terrapins must build on this victory rather than merely bask in it. "We're going to enjoy this one and move on," Fernando said.

Maryland travels to Rutgers on Saturday. The Terps are 6-0 against the Scarlet Knights since joining the Big Ten in 2014.