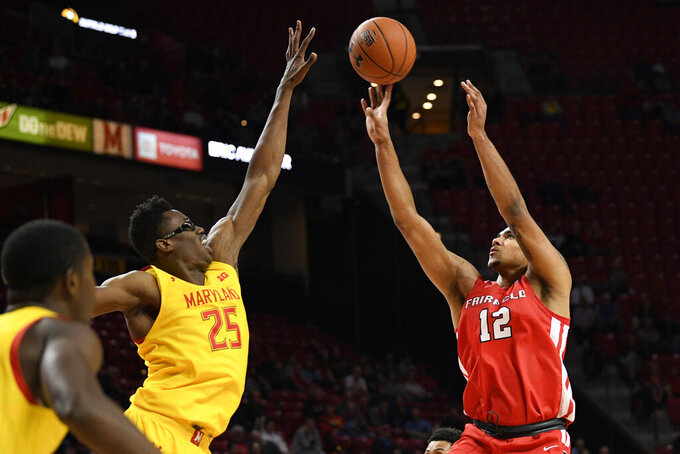 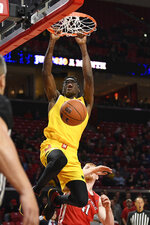 COLLEGE PARK, Md. (AP) — The time for experimenting with the roster and toying with the opposition is over for No. 6 Maryland.

After the Terrapins breezed past Fairfield 74-55 on Tuesday night, coach Mark Turgeon acknowledged that he knew before the opening tip that the outcome was never in doubt.

“Tonight I just wanted to play a lot of guys,” Turgeon said. “I always felt like we were going to win the game; I didn’t know by how much.”

Pretty much by whatever margin they wanted, such was the disparity in depth and talent between these two teams.

Jalen Smith had 17 points and eight rebounds, and three other players scored in double figures for the Terrapins (4-0), who took the lead for good at 9-8.

Beginning Friday against George Mason, it gets real for Maryland.

Anthony Cowan Jr. scored 12 points to pass James Gist and move into the Top 20 on Maryland’s career scoring list with 1,424. Cowan is one of three players in Maryland history with 1,400 points and 450 assists, along with Greivis Vasquez and John Lucas.

“Last year we had two or three dominant scorers, but now we have more weapons that the other team has to guard,” Smith said. “You can’t just focus on certain individuals.”

Landon Taliaferro scored 15 for the Stags (1-4). Twelve of Fairfield’s 18 baskets were from beyond the arc.

Coming off an overtime loss to Loyola Maryland in which they committed 21 turnovers, the Stags had 16 against the Terrapins — at least one by nine different players.

Fairfield cut a 15-point deficit to 55-46 before baskets by Cowan and Smith began a 12-3 spurt that made it 67-49 with 6:12 left. The highlight of the run was a resounding dunk by Smith off an alley-oop pass from Hakim Hart following a Fairfield turnover.

The Stags made only one field goal over the final 8½ minutes.

That was the pattern over these first four games. Toward the latter part of the second half, the Terps simply wore down the other guys.

“Lucky for me, if one guy isn’t playing well I can put in another one,” Turgeon said. “We usually figure it out at about the 15-minute mark of the second half, who our best players are, and we go with them.”

Nine players scored in the first half for Maryland, and the Terrapins overcame an early deficit to take a 41-27 lead at the break.

Fairfield went 7 for 11 from beyond the arc before halftime, but committed 10 turnovers and was whistled for 12 fouls.

Fairfield: The Stags aren’t as bad as their 1-4 record might indicate. They’ve got plenty of hustle and some solid outside shooting, but the turnovers are too much to overcome.

Maryland: The Terrapins appear to have reached the point where they need to be challenged. Though the outcome was never in doubt, Maryland seemed content to play just good enough to stay comfortably in front.

Fairfield faces Southern California on Nov. 28 in the Orlando Classic.