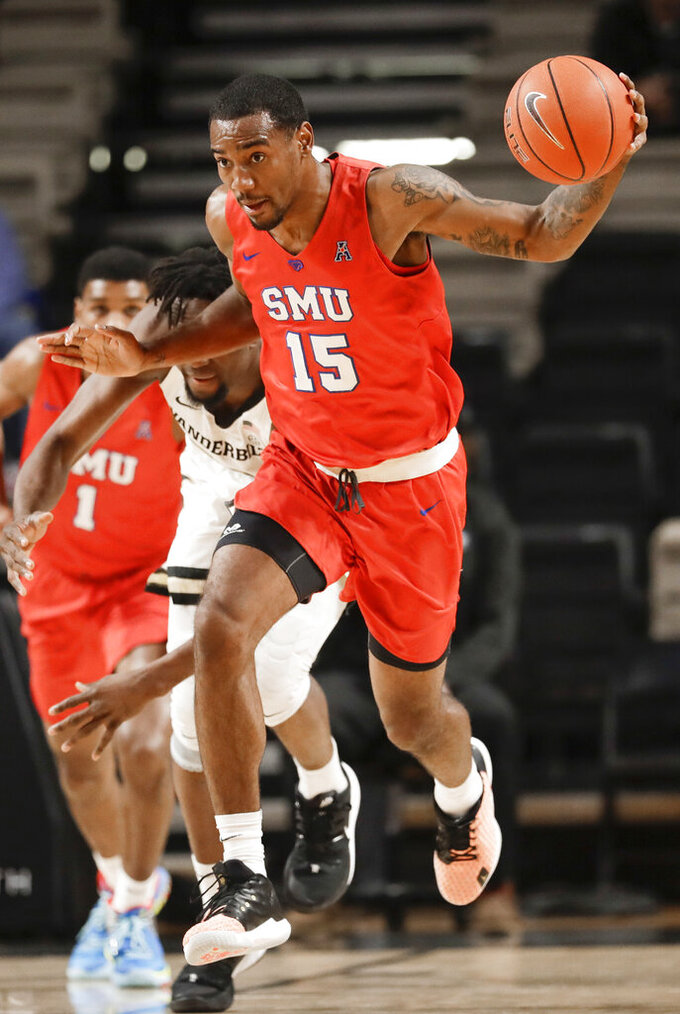 SMU forward Isiaha Mike (15) heads up the court after stealing the ball during the first half of the team's NCAA college basketball game against Vanderbilt on Saturday, Jan. 4, 2020, in Nashville, Tenn. (AP Photo/Mark Humphrey) 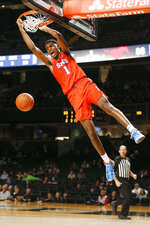 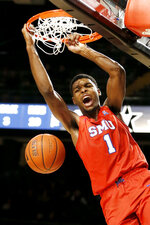 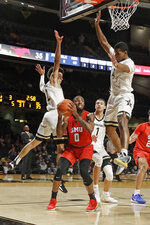 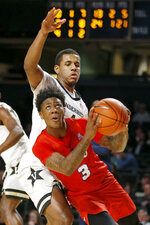 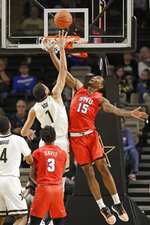 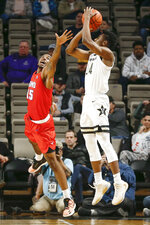 The Mustangs rallied from a 15-point deficit in the second half to defeat Vanderbilt 92-81 in overtime.

“You’re down 15 with six (minutes) to go, you usually don’t win many of those,” Jankovich said. “But if you’re competitors you don’t quit, and in college basketball crazy, crazy things happen and tonight crazy things did happen.”

Vanderbilt (8-5) had a six-point lead with less than a minute to go in regulation when SMU hit two 3-pointers in nine seconds to tie the game at 77. Tyson Jolly connected on one with 28 seconds to go then the Mustangs forced a turnover and Isiaha Mike drilled a 3 with 19 seconds to send the game into overtime.

“We were very fortunate, but it was a heck of a win for us,” Jankovich said.

The loss overshadowed an impressive performance by Vanderbilt’s Aaron Nesmith. The sophomore set a career high with eight 3-pointers and finished with 29 points, while Vanderbilt hit 15 total 3s to tie a season high. Nesmith was 8 of 12 from behind the arc.

Vanderbilt coach Jerry Stackhouse was predictably down after the game.

“Everything that possibly could go wrong at the end of that game did go wrong for us,” Stackhouse said. “For us not to walk away with a win, that stings.”

Ethan Chargois added 18 points and 11 rebounds, while Feron Hunt scored 12 and pulled down 11 boards for SMU. Emmanuel Bandoumel chipped in 10.

Scottie Pippen Jr. had 15 for Vanderbilt.

Chargois scored 11 of the Mustangs’ first 13 points as SMU got out to a 13-5 lead to start the game.

SMU extended its lead to 20-8 on an Isiah Jasey layup with 12:56 to go, but Vanderbilt answered with a 10-0 run that included at alley-oop dunk by Maxwell Evans on a pass from Saben Lee.

Jolly made a layup at 7:20 to put the Mustangs back up by 10, but Vanderbilt chipped away until Nesmith hit his fifth 3-pointer of the half with 15 seconds left to tie the game 40-all at the half.

SMU: The Mustangs struggled from the free-throw line in the first half going 3-for-7 (42.9%). They were eighth in the nation in that category at 79.2% before the game. They finished the game 14 of 20.

SMU: The Mustangs outrebounded Vanderbilt 41-29 and have now pulled down more boards than their opposition in 10 of 13 games this year.

Vanderbilt: The Commodores were only 1 of 7 from the field in the overtime period, while SMU went a perfect 5-for-5.

Vanderbilt opens SEC play on the road against Auburn on Wednesday.