Sochan and shorthanded No. 7 Baylor get past TCU 72-62 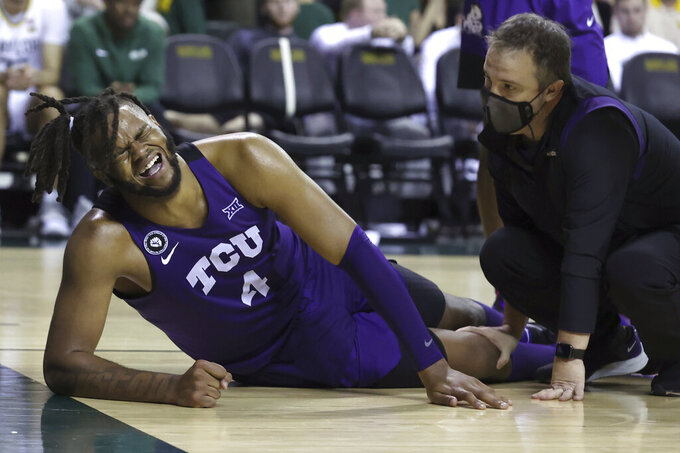 TCU center Eddie Lampkin reacts after injuring his leg during the first half of an NCAA college basketball game against Baylor, Saturday, Feb. 19, 2022, in Waco, Texas. (AP Photo/Jerry Larson) 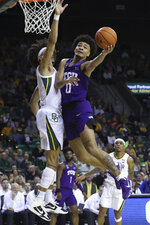 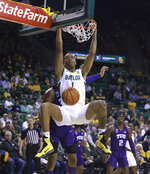 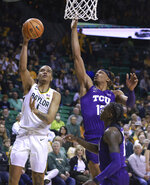 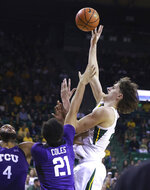 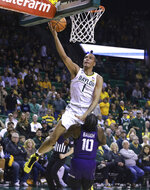 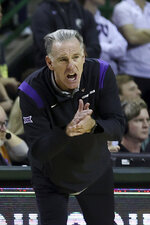 WACO, Texas (AP) — Jeremy Sochan and Kendall Brown are standout freshmen for reigning national championship Baylor. The roommates are also young kids who can endure the heavy workload needed from them with the seventh-ranked Bears playing shorthanded.

Sochan matched his season high with 17 points while Brown had 13 points, five rebounds and five assists for the Bears, who were without their big man and two ailing guards and still led throughout in a 72-62 victory over TCU on Saturday.

“They might be too tired to talk,” coach Scott Drew said when sitting between them after the game.

Except for a two-minute stretch by a seldom-used sophomore in the first half, Baylor (22-5, 10-4 Big 12) used only six players while bouncing back from a 10-point loss at No. 11 Texas Tech three nights earlier. Five of those players scored in double figures.

“Everybody really stepped up. We had a nice six-man rotation going right there,” Drew said. “I thought the guys stayed out of foul trouble and were aggressive, and really locked in on the defensive end.”

Matthew Mayer added 16 points for the Bears, who led by as many as 21 points with five minutes left before a late spurt by TCU. James Akinjo had 11 points and eight assists, while Flo Thamba had 10 points and eight rebounds.

“They’re playing really six guys in this game, so get somebody in foul trouble. Well, we clearly didn’t do that,” TCU coach Jamie Dixon said. “Nothing we tried ... we tried to press, tried to get the in foul trouble. Couldn’t do it.”

Sochan, who missed four games after turning his left ankle at TCU on Jan. 8, had an early assist with a bounce pass that Brown slammed home for an early 14-4 lead.

“We got the little connection,” Brown said with a smile.

Baylor's next basket was a short jumper by Sochan, who did a spin move, stopped, and spun again before the shot. The Horned Frogs got within 18-16 on a fastbreak layup by Miles, and never got closer. Sochan followed that with a dunk and a three-point play.

“I’m definitely recovering still. I think it’s a long process,” Sochan said. "But I’m at a point where I’m feeling good and I just want to do anything for my team and play as hard as I can."

TCU big man Eddie Lampkin grabbed at his right knee while writhing in pain on the floor after coming down hard when going for an offensive rebound late in the first half.

The 6-foot-11 Lampkin wasn’t putting any weight on his knee when helped off the court, and going into the tunnel right past Tchmwa Tchatchou sitting near the Baylor bench. Lampkin had a brace on his right leg when he came out for the second half, but played only about four minutes after the break.

"Eddie seems to be OK,” Dixon said. “He said he wanted to play in the second half and he seemed to feel better, but we kind of erred on the side of caution.”

TCU: The Frogs began a stretch of seven games in 14 days, the first of three in five days. Five of those games are against ranked teams, including back-to-back against sixth-ranked Kansas to open March.

Baylor: The Bears have 10 Big 12 wins for the seventh time over eight seasons. Before that, Baylor had 10 conference wins only eight times over 103 seasons. ... Cryer, who has missed five of the last six games, was the team's leading scorer at 13.5 points a game. Flagler, who had 60 points the previous four games, missed his second game.

Baylor will be ranked in its 53rd consecutive poll when the new Top 25 comes out Monday, and should extend its Top 10 streak to 45 polls in a row. Both streaks are already school records.

Jared Butler, an All-American guard for Baylor’s national title last season, was presented his championship ring during a timeout in the first half. Butler is now with the Utah Jazz, and was able to attend during the NBA’s All-Star break.

TCU: Hosts West Virginia on Monday night in the makeup of a game postponed Jan. 3 because of COVID-19 issues in the TCU program.

Baylor: At Oklahoma State on Monday night. The Bears were still the nation’s No. 1 team when they lost at home to the Cowboys, 61-54, on Jan. 15.